Lol, they really sealed up the helmet for Sol Gravion tight for some reason. In a plastic bubble wrap plus a Ziploc baggie?

Same as with the God Gravion figure, the Gran Kaiser still features somewhat limited in terms of shoulder articulation due to the shoulder pad design. Unfortunately, this problem still carries over to the combined form of Sol Gravion as well.

The mid-torso articulation is what’s making this figure work, even when the shoulders are giving it problems.

Piloted by the 14-year old Luna Gusuku and the artificial life form Eina, former pilots of the God Gravion’s G-Driller, the Geo Javelin forms the arms of Sol Gravion.

Both units are identical.

Piloted by Eiji Shigure, the pilot of God Gravion’s G-Attacker. Originally, the chest unit on God Gravion was piloted by Leele, but this time around, the task is given to Eiji.

The set comes with an upsized Geo Caliber, in order to properly form the G-Gradius.

Flight stand for the G-Gradius.

Locking the leg units is a bit tricky, but you have to hook the shins onto the hooks of the Geo Mirage’s wings.

The Gran Kaiser locks in place thanks to these feet clamps. 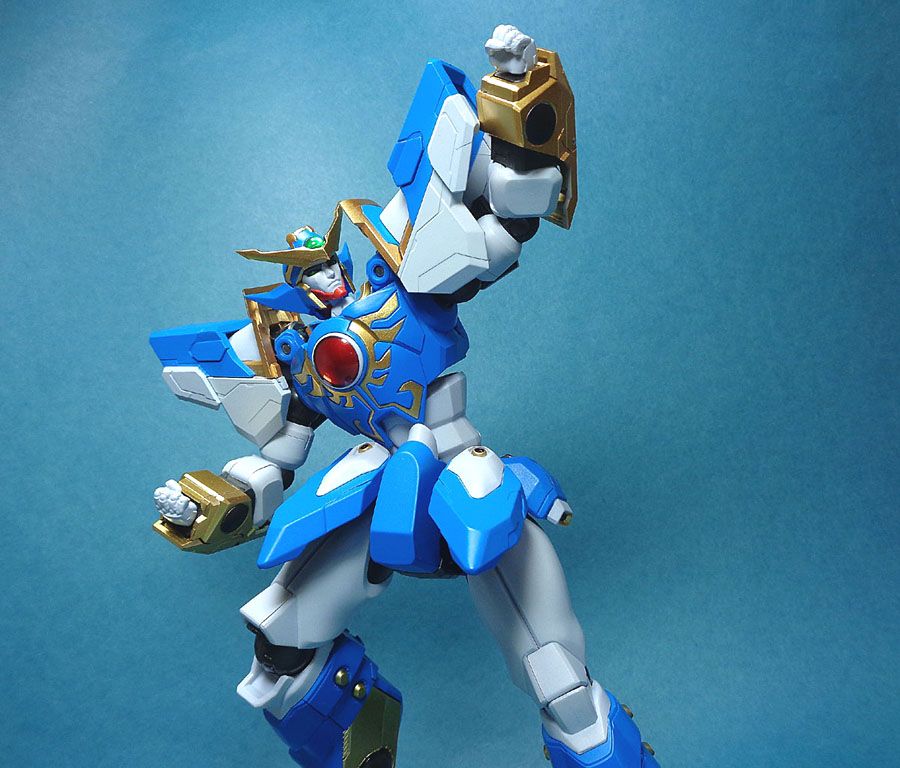 To form up Sol Gravion, remember to take apart the head, and then rotate around the masked head to the front.

The helmet parts are still tricky to lock all the way in. Same as with the God Gravion, the halves tend to pop apart too easily.

Created and stored on a secret location on the moon by the mysterious Klein Sandman to combat the more advanced extraterrestrial Zeravire, who have already adapted to God Gravion’s weapons and attacks. The Sol Gravion is the upgraded form of Gravion and is composed of machines called Sol Gran Divas, piloted by the members of the Earthgertz team. Pilots for each unit must possess the G-Factor, a genetically inherited trait that allows the individual to withstand high levels of gravimetric pressure.

Sol Gravion’s chest plates can be adjusted to go higher a bit to allow for more arm articulation, but it still kinda gets in the way.

Sol Graviton Spiral Crusher Punch (both arms locked together and firing forward. Sadly, the toy can’t properly pose with both arms clasped together due to the design of the chest plate).

Sol Graviton Breaker (flaming up the drill on the left arm and using it to do a powerful melee attack, additional flame effect parts on the toy here would’ve been a nice touch)

The sword is formed first by removing the chest plate from Sol Gravion.

Take note of the unique shape of the hole in the sword handle before plugging in the blade.

To get the hand to hold the sword, remove the pommel first.

Unfortunately, you can’t get him to hold the sword with both hands completely, this is about as good as it gets.

Some minor changes with the paint apps here, more eye shadow and the smaller dark circles on the chest for the Sol one (right).

-The toy is beautifully painted, lots of paint details.

-Despite not having ratchet joints, it still holds poses well enough.

-With the exception of the Gran Kaiser, all the other units are all new tooling and sculpt.

-I found it hard to stand the Gran Kaiser this time around for some reason. I don’t recall having this issue with the God Gravion Gran Kaiser. It kept slightly tipping over.

-Still no proper display base (same as God Gravion).

-Same with God Gravion, Sol Gravion still has limited shoulder articulation, due to the shoulder pad design (can’t do “arms straight forward” poses), though I guess this is more of an animation model design reason.

-Parts swapping still required, no way to get a “perfect” transformation here.

-Same as with the God Gravion, the transformation for Gran Kaiser felt needlessly overcomplicated, since you need to do parts swapping anyway and the pieces are detachable, seems like this could’ve been a chance to simplify the design IMHO.

-Not much in terms of weapon accessories (Graviton Rifle, Crescent etc), though in fairness, Sol Gravion didn’t really have much in terms of new weapons and attacks since his attacks were more limited compared to the God Gravion.

Could be unrelated, but then again, could be something to watch out for later on. After opening up the God Gravion to do comparisons, I discovered all the spare hands on that set had started to deteriorate(!), with the exception of the default hands which were connected and folded inside the G-Driller. I REALLY hope this doesn’t happen to the Sol Gravion hands as well (but I think it likely will). It was really disgusting. I eventually managed to clean the hands of the grime (paint?) but sheesh… really? For a high-end collectible? I wonder how the toys will be able to hold their swords later on. Sigh…

Overall, I loved this set! It looks way better than the God Gravion and really stands out. The downsides here are the lack of weapon accessories (Sol Gravion never really had much to begin with in the Anime) and the limitations of posing the figure because of the chest design, plus the relatively high SRP for the set. Still, I think it’s amazing and well worth it if you’re a fan of the series.

Sentinel has already shown prototypes for the God Sigma Gravion and the Ultimate Gravion, these should be coming out sometime in 2021 and 2022 I reckon.


Funfact: Unlike the God Gravion, the Sol Gravion is dependent on the Gran Knights’ emotion and mental focus to maintain or increase its power output. Its “Sol Flames” are one result of this new power. While Eina’s “love” being another power, which can increase the Elgo power in the Gravion to heal the team and even restore a heavily damaged God Gravion.