After almost 2 years, SOTA finally rolls out the Revolution wave. The line is pretty good and on par with what we’ve come to expect of SOTA’s sculpts and details. The only main drawback is that the joints still break easily, just like their SDCC repainted counterparts.

Be warned, I twisted Dhalsim’s shoulder wrong and the joint snapped at the base. Grr…

Comes with an optional “open-mouth” head.

Note: while I didn’t encounter any problems with my E.Honda, a friend’s E.Honda broke at the groin joint. So be careful.

Standing roundhouse kick. I was surprised the figure could do this pose.

“R” stands for “Rainbow”, she’s a wrestler and dreams of one day meeting her idol, Zangief.

Originally shown in the Marvel Super Heroes Vs. Street Fighter game, Zangief could later morph into this version of himself in the Marvel Vs. Capcom 2 game. 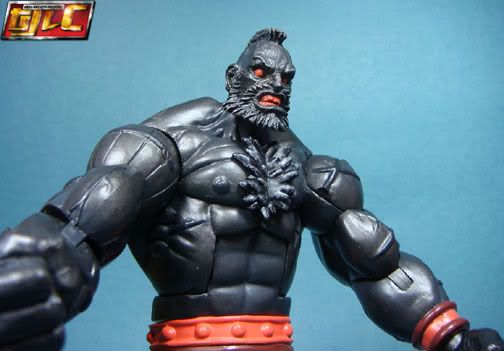