Time to give Gaiking a makeover!

The enhanced parts for the legs and feet are just actually add-on (plastic) pieces.

Make sure to extend out the ankle joint to give the new feet more clearance.

Gaiking’s forearms are outright replaced with the bigger ones. Sadly, the new, bigger forearms are no longer diecast.

The set includes an all-new chest and head component for Gaiking.

Attaching the new chest “skull” is a bit trickier compared to the default piece. If it gives you grief, just try to wiggle the jaw forward to give the connectors more clearance.

Likewise, the Counter Crosses have also been beefed up. 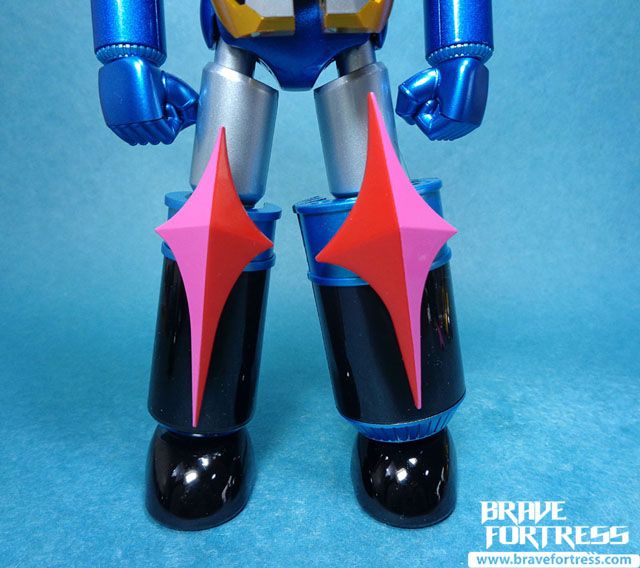 Before and after. Thanks, Charles Atlas!

A new, wider holder piece for the hangar is included for the new, thicker enhanced legs.

Remember to slide out the hips first before collapsing the legs to prevent scuffing the lower legs. 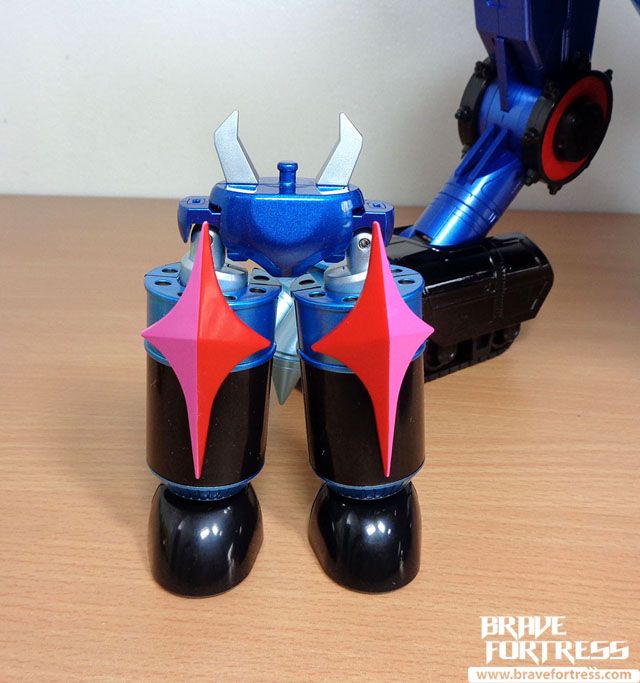 The enhanced Gaiking chest unit can still connect to the Daiku Maryu.

Remember to properly fit this protrusion into the jaw to hold the head in place in the adapter. 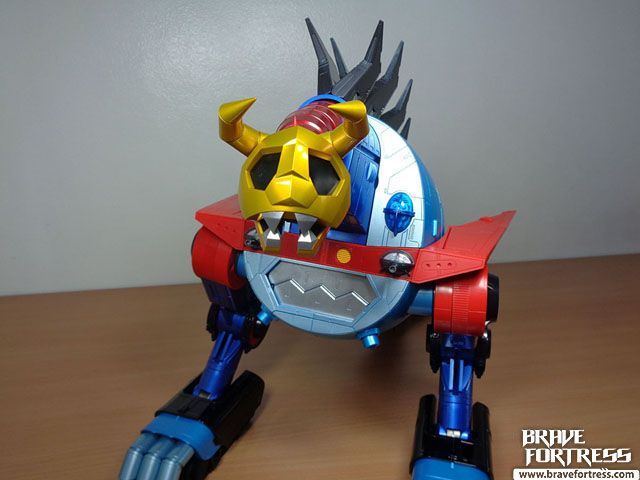 When the crew of the Daiku Maryu is lured into a trap on the moon (episode 22-23), both the Daiku Maryu and Gaiking become heavily damaged and are pinned down by the latest Zelan Dark Kaiju (Ankoku Kaiju), the Moon Condor. In order to repair Gaiking, Gen Sakon uses iron ore mined from the moon’s surface, at the same time upgrading the mech with new weapons and improved power output.

Unbelievably, in the episode, Gaiking was remodeled while the unit was stored VERTICALLY inside the Daiku Maryu. How??? Lol…

Paralyzer! -Gaiking uses its horns to stab an opponent and send a powerful electric shock throughout its body.

Killer Bite! – Gaiking uses the Daiku Maryu’s jaw to bite down on an enemy.

Saur Geyser! – Gaiking fires beams from the eyes of the Daiku Maryu. The enhanced version features pure pink beams instead of the red and blue of the previous version.

Hydro Blazer! – Gaiking’s most devastating attack. It fires a Hydrogen fireball of 500,000 degrees from its abdomen (the nose section of the Daiku Maryu)

With the help of his ESP powers, Sanshiro is able to control the direction of the Hydro Blazer after it’s fired from Gaiking, making it move similar to a fast ball or a curve ball thanks to his professional baseball training, allowing for some trick-angled shots to bypass enemy defenses.

The Miracle Drills can be separated into their various segments (just like how they’re launched in the Anime). Usually, there should be two different set pairs of drills, a larger pair for the Daiku Maryu and smaller set for Gaiking to use (one scene in the Anime showed them each equipped with their respective drills), but I guess for the sake of cost cutting, we only get one pair with this set.

Appearing as early as episode 14 in the series. When the team’s engineering genius, Gen Sakon, is captured and brainwashed by the Zelans, he betrays the crew, leading to the Daiku Maryu’s capture. He begins to construct a new weapon upgrade using Zelan tech for the Daiku Maryu to be deployed against Earth’s military. Sakon eventually breaks free of the mind conditioning and turns the tables on the Zelans, giving the Daiku Maryu (and Gaiking) a new weapon attack courtesy of the enemy’s technology and resources. 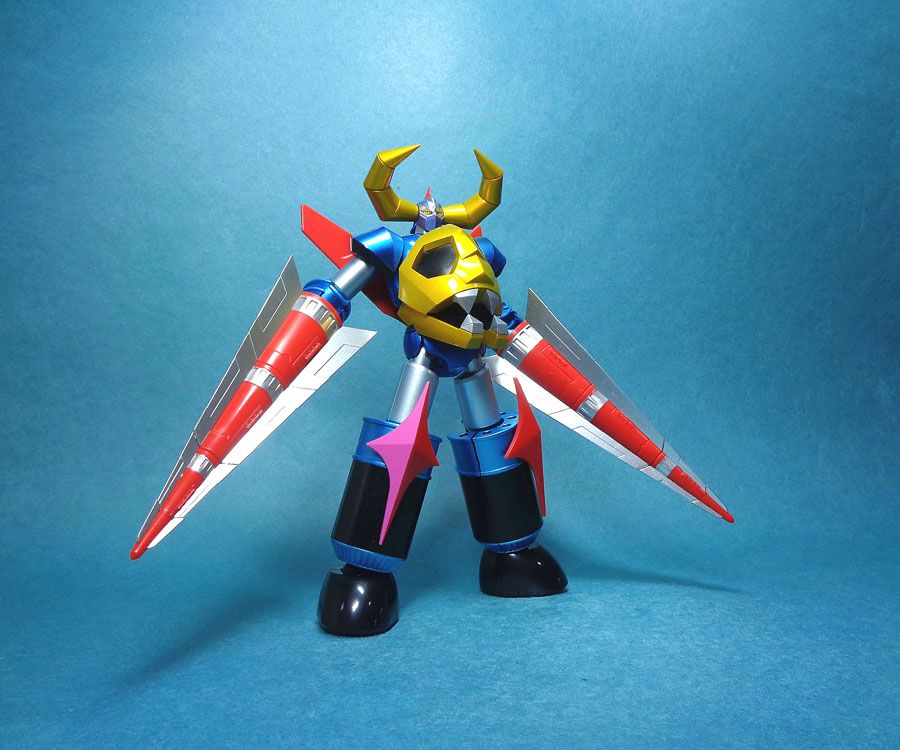 For Gaiking, the Miracle Drills are usually utilized as a projectile launched from Gaiking’s arms, as opposed to being used as a melee weapon attacks. The opoosite is true for the Daiku Maryu’s style of use for the Miracle Drills (she ship slams into an opponent with the drills).

The default head is on a ball joint and can be easily pulled off.

You’ll have to transplant the horns to the new head though.

Lol… yeah.. that oversized head looks silly, but it is what it is.

When Gaiking is in Face Open mode, several new powerful attacks become available:
–Eye Beam– Similar to the Despair Sight attack, but instead of twin beams, the beams from both eyes now merge into a single, more powerful, focused ray.
–Abshock light – strobing lighting that causes disorientation for Gaiking’s opponents, emitted from Gaiking’s eyebrows.
–Gaiking Missiles – launchers on Gaiking’s cheekbones rapidly fire micro missiles at 300 rounds per minute.
–Death Eye – a highly destructive beam fired from the front tip of the c0ckpit block, used only once, in episode 36.
–Death Fire – a high-temperature flame attack projected from Gaiking’s mouth. While not as hot as the Hydro Blazer (200,000 vs 500,000 degrees), it can be used in conjunction with Daiku Maryu “Kasha Cutter” attack, where Gaiking helps complete the Volution Protect mode of the Daiku Maryu and projects flames as they rotate at high speeds into an enemy. Used only once in episode 34.

UPGRADES FOR THE DAIKU MARYU
Throughout the series, the Daiku Maryu gets new weapons added to its arsenal to overcome the Zelan’s battleplans. It’s all thanks to the ship’s mad genius engineer inventor, Gen Sakon. By the end of the series, with the vast attacks added to its arsenal, the ship becomes a powerhouse, capable of destroying multiple Zelan Dark Kaiju even with Gaiking deployed on another mission.

There’s a lot of preparation going into placing the Miracle Drills on the Daiku Maryu. The display flight stand needs to be positioned exactly like so.

The thicker portion is up front, while the thinner portion is in the back.
[imghttps://hosting.photobucket.com/images/v463/Goldgaigar/G100x_Gaiking_Parts105.jpg[/img]

The flight stand for the rear section is to be positioned into the 5th segment of the tail (there are 9 segments in total), it’s the one right in front of the wheels. This is the best way to balance out the tail. 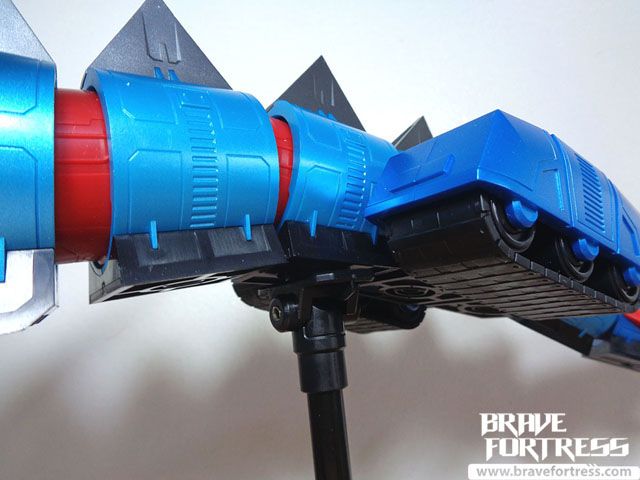 To remove the Daiku Maryu’s feet, simply rotate them to the counter-clockwise. You’ll hear a click when done right. The same goes for BOTH feet.

With the drills equipped, the Space Dragon becomes really long (almost 3 feet). I think collectors will be hard pressed to display this facing diagonally on a shelf.

First appearing in episode 19, the cutter is created with the help of Dr. Kijima in order to cut through the indestructible “Golden Concrete” spun by the Dark Kaiju “Kaikon”. The Golden Concrete was so strong, not even the Miracle Drills could break through it. With the Giant Cutter deployed, it could easily cut through the substance even when the Daiku Maryu was completely engulfed in it. 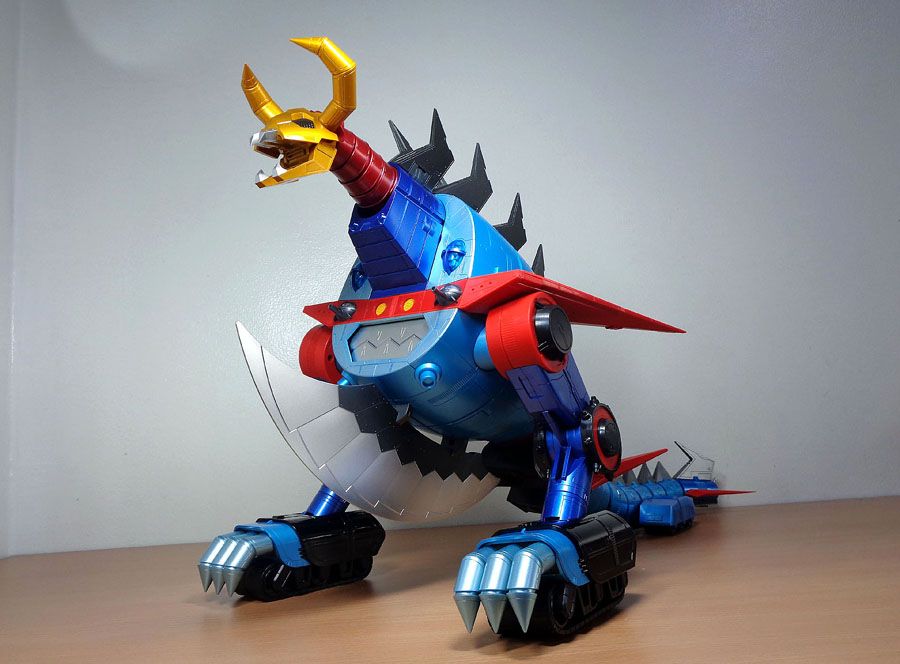 The Giant Cutter simply plugs into the ports underneath the Daiku Maryu’s belly. It’s not a smooth, easy attachment to work in due to the shape and tightness of the ports, but it will fit in if you slowly wiggle it into place.

In episode 41, Gaiking carried the Daiku Maryu with the Giant Cutter deployed and used it as a giant melee weapon. The attack is called the “Giant Cutter Upside Down Slash”. Heh, I dare not attempt to recreate this here, for fear I might end up dropping the Daiku Maryu and it smashes into bits. 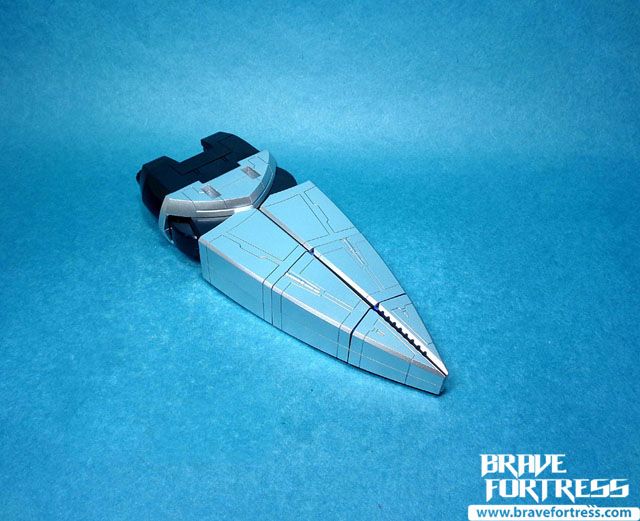 Appearing starting episode 21, the Big Horn is launched from Daiku Maryu’s main hatch. Its main function is to act as a giant pincer to grab or crush the Daiku Maryu’s opponents.

The Big Horn features ratcheted joints when you split it open. Cool!

Appearing in episode 43, the Vogue Eye is usually used in conjunction with the Big Horn to form an alternate head for the Daiku Maryu when Gaiking is sortied.

The Vogue Eye provides new attacks for the Daiku Maryu:
–Screw Laser – an ultra-high heat laser beam fired from the center protrusion of the head.
–Thunder eye – a powerful magnetized beam attack emitted from the large eyes. Used to immediately cut Dark Kaiju Kamakirin into pieces in episode 43.
–Rapid-fire Missiles – as part of the Daiku’s upgraded arsenal, this new attack is introduced at the same time as the Vogue Eye. Fired from the Daiku Maryu’s dorsal fins.

Powered Up Daiku Maryu and Gaiking 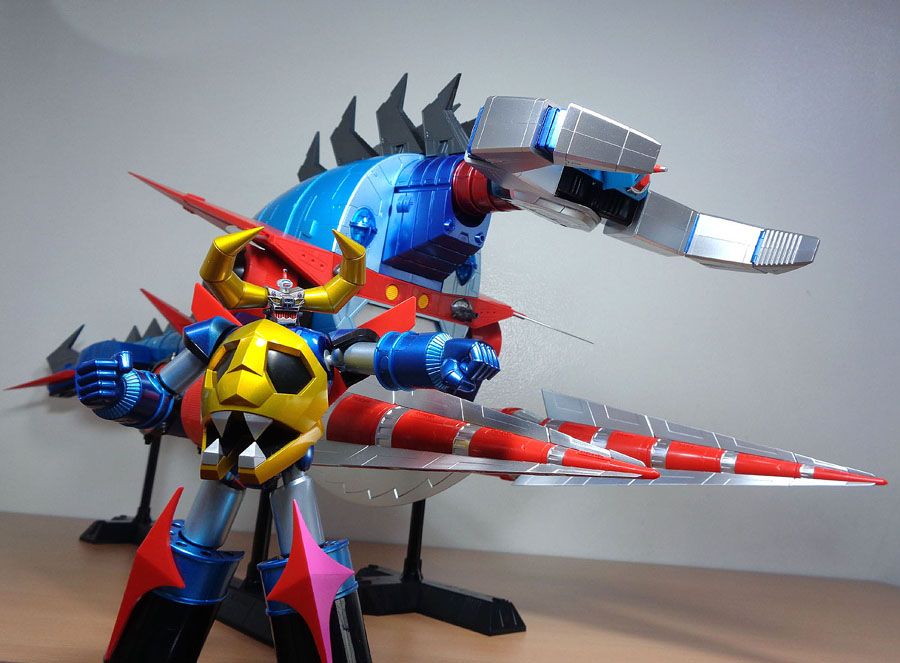 The Good
-Diecast posts for the flight stands! That was a surprise.

-Lots of accessories included. Bandai made this set worth the price.

-The connection for the new chest (Gaiking part 3) feels more secure than the basic one that came with the Gx-100.

-I love the ratcheted parts on the Big Horn. Very solid feel.

-Solid connections for the Vogue Eye pieces. Nothing feels loose or falls off easily from the neck joint, despite the size and weight of the thing.


The Bad
-No actual display platform for showcasing the weapons when they’re not equipped on the Daiku Maryu.

-The huge elbow gaps in the new arms are awkward to look at. I don’t recall having this issue with the old Gx-27.

-Attaching the Giant Cutter can be a bit difficult at times.

-The clear parts on the Face Open gimmick just makes the head look really disproportional. I kind of wish they included a properly-scaled “clear head” with the set.

-While the Miracle Drills are a cool addition, I just don’t see how most folks will be able to display it on a shelf, except facing to the side, unless maybe have a diagonal 3-foot wide center table dedicated to the set? Hmm…


Overall, a pretty good upgrade set. I do wish the optional parts were included by default with the main set, but I suppose Bandai wanted to cut costs down for the main set and make it more palatable to the general public. While the set does have a lot of goodies included with it, the overall price of getting everything together does carry a hefty price tag (75,000 Yen + 18,000 Yen for both sets), it can be considered something for the diehards of the line. For the casual collector on a budget, I think the stand alone Gx-100 set alone would be enough to serve as a display piece without having to spend extra $$$ for the additional parts.

Link to the Gx-100 review gallery.