Beautiful illustrations included in the manual.

When you first get Daitetsujin One Seven out of the packaging, make sure to do the following:

Adjust its shoulders to the proper height by pushing them upwards.

Pull its head up so that there’s added clearance for neck articulation.

Dr. Sawara of the world peacekeeping force Red Muffler creates the world’s smartest super computer, Brain, to protect the Earth from disaster and safeguard the planet’s environment. Brain eventually comes to the conclusion that human beings are the greatest threat to the planet’s stability and must be eliminated. It decides to create an army of giant killer robots to eradicate humanity once and for all.

One of Brain’s first creations, the One-Seven, rejects this logic and vows to fight to preserve the human race. One Seven is deactivated and sealed away, only to be later accidentally reactivated by a young boy named Minami Saburo. The two become inseparable and fight together alongside the Red Muffler forces to stop Brain and his minions.

One Seven possesses an adaptive Super A.I., which allows it to constantly evolve and improve itself. It also has its own internal production facility, capable of manufacturing anything it requires, from Saburo’s electroencephalogram (EEG) helmet, to an internal maintenance robot, to the large Sigcon vehicles used throughout the series.

I really love the paint deco on the eyes. Very good detailing. 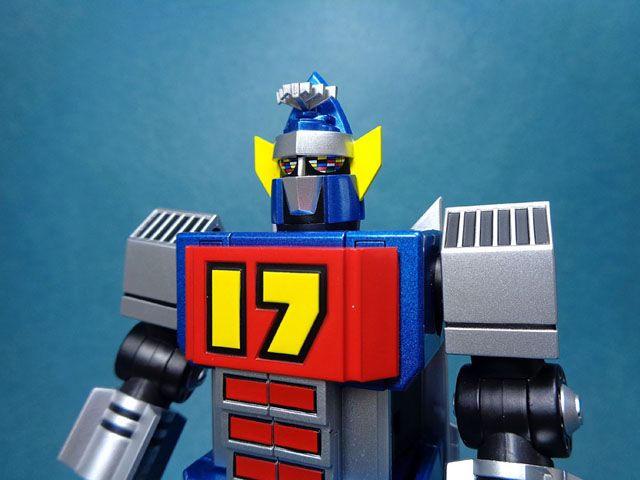 For accessories for One Seven, it only comes with alternate open hands. Uh… that’s it.

The set comes with 4 mini vehicles.

Created by One Seven’s internal forges, it is given as a token of friendship to Saburo starting episode 6 and controlled by the latter’s EEG helmet. One Seven can also control the Sub Machine via remote control if needed.

Yeah, this thing is definitely not to scale.

The land type Sub machine is exactly the same as the flight type, just minus the propeller and wings.

Transforming One Seven into its Fortress One Seven mode requires folding his arms into his chest cavity.

Remember to flip out these connectors on the left foot. It’s a bit difficult to do if you’ve got shallow fingernails. Too bad there’s no tool included to help with this.

Fortress One Seven is One Seven’s preferred form when it’s recharing in its hiding caves in the mountains in between battles.

You can store the Sigcon Tank and Sub Machine inside Fortress One Seven’s feet.

You will have to raise the legs up a bit to create clearance for the hatches.

In the show, the Sub Machine launches from the left foot.

For Flight One Seven mode, simply just close the catapults up top, lower the tower and raise the dorsal fins of the Fortress mode.

You can place the flight vehicles up top.

Back to Battle One Seven
For armaments, One Seven generally relies on hand-to-hand physical combat to take down its foes. It can also shoot rounds of ammunition from its wrists.

It also has Nike-Class missiles located in its shins. Apart from firing missiles, the right shin can also produce fog (smokescreen?) to cover One-Seven’s escape after a battle.

To open the panels up, its best to push one panel down to create a crack for your thumbnail to lift the other cover up.

The power switch is located at the back.

Do note that the 3x LR41 batteries come PRE-INSTALLED. So make sure to remove them ASAP before they leak over time.

To equip the Graviton unit, simply flip up the chest panel to put the it inside One Seven’s torso.

Opening one side of the torso panel opens both. Cool!

Often used as One Seven’s finishing move, this weapon fires a ball of energy that causes its targets to shrivel and implode three times before finally exploding from being crushed. It’s mentioned in the series that One Seven requires 15 hours of charging time in between use of the Graviton. Brain exploits this weakness in one episode by sending two attack machines in succession. One Seven eventually counters this by upgrading itself to shorten the charging time to just 13 hours.

Pressing Button A will activate an attack sound and light up One Seven’s eyes.

While Button B activated, pressing Button B again will cause the eyes to pulse through different colors and generate one of three possible random voice effects.

Pushing A+B together will toggle the program to play on Mode 2.

While Button B activated, pressing Button B again will cause the eyes to go red and cycle through 3 specific sentences by One Seven.

Pushing A+B together again will toggle the program to go back to Mode 1.

Prior to episode 19 of the series, One-Seven could only communicate through the special EEG helmet that only Saburo can use. It later on uses the color pattern of its eyes to communicate “yes” (blue lights) and “no” (red ligthts) to the Red Mufflers. Starting episode 19, One-Seven eventually develops the ability to speak in normal human language. 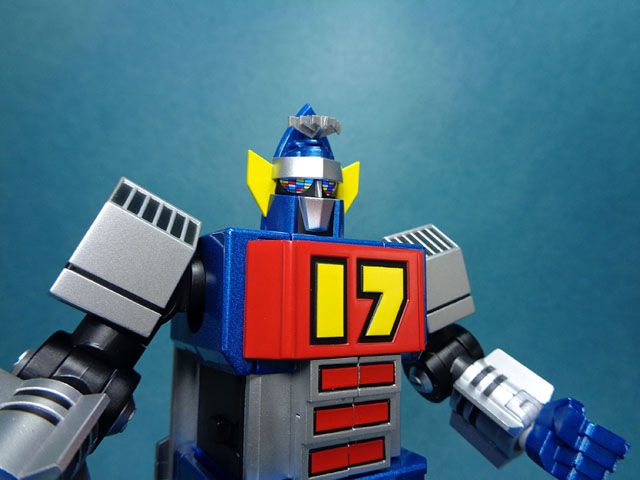 -The first thing you will notice right away is that this guy is heavy! There’s an impressive heft to it when you lift it out of the box. Nice.

-Lots of ratchets on this toy!

-Beautiful paint finish on the toy. Particularly the back of One Seven’s head.

-Great work on the rainbow-colored eyes.

-Electronics are present. That’s always a plus.

-Batteries come pre-installed!! Watch out. Best to remove ASAP before they leak.

-No volume adjustment for the electronics.

-While the electronics are present, using them can be a bit confusing. I think adding an extra button or switch would’ve simplified the process.

-In the series, One Seven has a gimmick called “Mirror Attack”, where the plates on his abdomen flip over to reveal full red panels (episode 31). This reflects energy-based attacks back to its opponents. Too bad this gimmick isn’t recreated in this toy.

-Not much in terms of accessories. Some effects parts for the Graviton attack would’ve been nice.

-The leg joints are super duper tight when you first move them for transformation. They eventually loosen up, but go slow for the initial movements.

Due to the nature of the small size of the box, the manual will definitely come slightly warped.

Overall, a very good release. I was actually pleasantly surprised at how this one turned out. Considering how we just got a heavy hitter release in Gx-100, I thought maybe Bandai would release a lightweight, but nope, they rolled out another impressive figure, chockful of diecast with electronics to boot!

While there are some negatives, it’s generally geared towards lack of certain established features in the SOC line (no display base for one, no styrofoam tray for another) and not something caused by failure of design or production (except for maybe the curled-up manual, but I’ll let that slide). I think we’re off to a good start for a post Gx-100 series.

ADDENDUM: Be mindful when posing Daitetsujin’s feet, as they do tend to scrape against the lower legs. Special thanks to Getterboi over at Robot Japan for the heads up on this.

Funfact: One Seven takes his name after the “Autodiode One Seven” chip in his body.

Funfact 2: The number 17 is a tribute to Tetsujin 28, with the tens and ones digits subtracted by 1.