Take note of this clear connector piece on the tray.

Sigh…. I miss the days when an SOC release came with booklet separate from the manual, containing tons of images of the toy in action. Too bad Bandai pretty much stopped doing this.

STORY:
After the survivors of the planet Beal escape the destruction of their homeworld by the invading aliens known as the Gaizok, they head to Earth to find a new home. Splitting into 3 families across Japan, the survivors create a powerful, combining robot called Zambot 3. It, along with the families’ space ships are sealed away over a period of 150 years in preparation of stopping the Gaizok’s Mecha Boost army, should they ever come to Earth.

Piloted by the hot-headed Kappei Jin, a 12-year old boy hailing from the Jin Family, the Zambird is the only unit that can transform into a humanoid form.

When in Zambird mode, make sure to equip the chest plate with the hinges to properly tilt the dorsal fins up for Anime accuracy.

C0ckpit canopies open up to reveal Kappei and his faithful pet dog, Chiyonishiki (Kappei’s the red one).

Bird Guns – 50mm Vulcan cannons that can be clipped above the canopies.

Treble Horn- A sonic weapon that fires from the Zambird, this attack actually only appears once in the entire series, in episode 6. The Tremble Horn can be clipped onto the top of the chest plate of the Zambird.

So many optional chest and wing parts for Zambird..

The only Zambot 3 unit that can transform into a humanoid mode, the Zambo Ace was the show’s primary mecha until Zambot 3 first combined in episode 3. 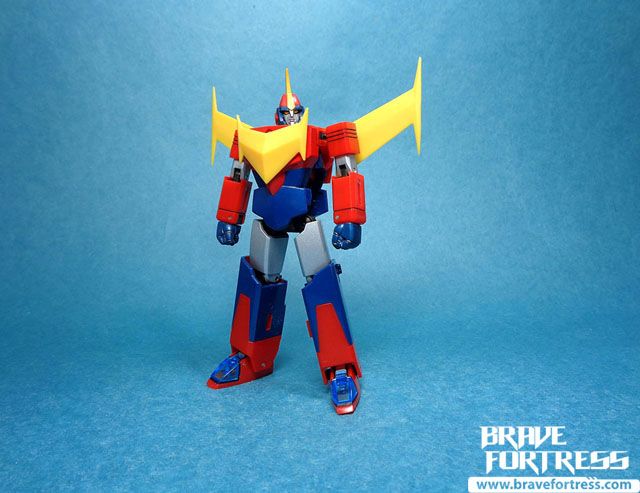 CRITCAL WARNING!
Be mindful when transforming Zambird. Gently slide the legs down and AVOID using excessive force. The hip joint pins are actually VERY thin plastic. I ruined my first Zambo Ace while rapidly transforming it and pulling on the legs too hard and fast, tearing the entire hip pin out and now it cannot be repaired. Sigh… Luckily Zambot 3 never really became hard to find so it was easy to get another set, but still… Grr…

Originally having not much in terms of weapons in its arsenal in robot mode (except for the Bird Guns on its feet), the Zambo Ace mostly only relied on physical attacks to take down enemy units. It was only later when it received the Zambo Magnum that it had more firepower at its disposal. 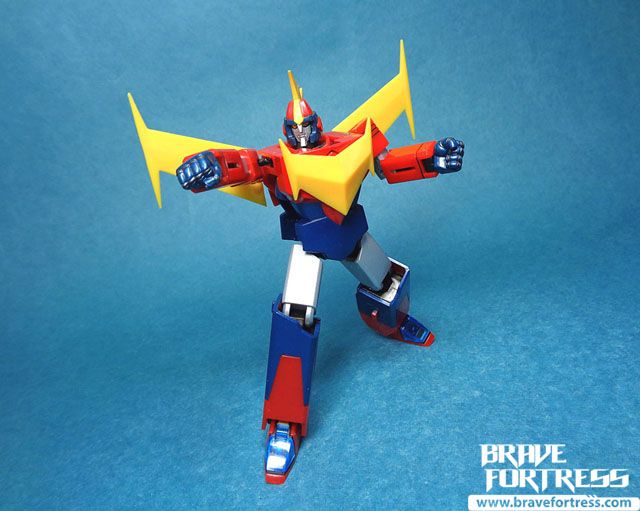 The Zambo Magnum along with the Holster Jet Gun Belt with optional parts. 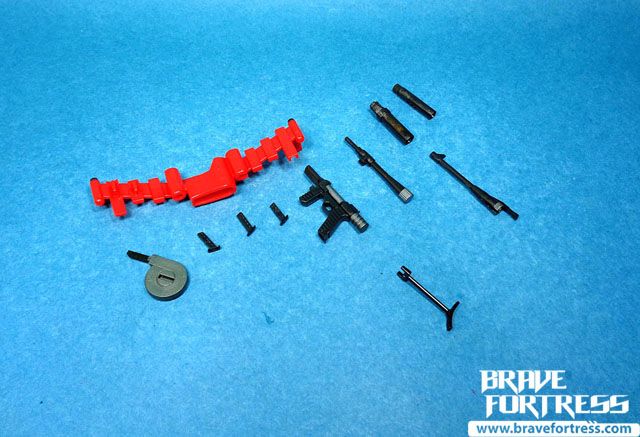 Launched from the Jin Family ship, the Beal I, the Holster Jet has boosters on it to allow it to fly into battle and then wrapping around Zambo Ace’s waist.

Everything the Magnum needs is on the belt, from the silencer, to the under-barrel grenade launcher and even extra ammo clips and an ammo drum.

The Gun Belt leaves a very big gap exposed on its left flank. 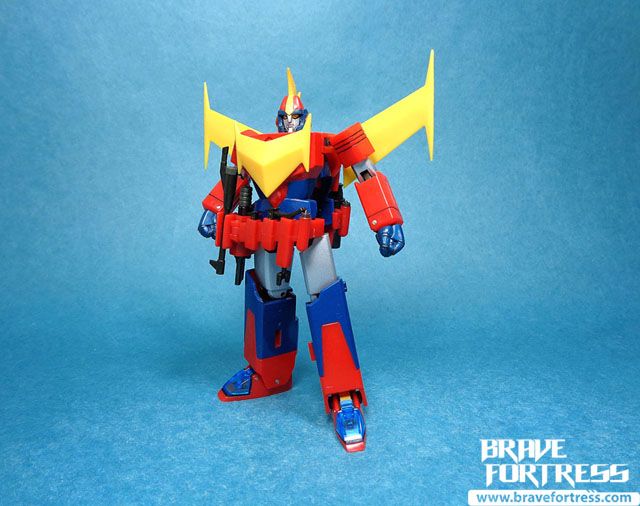 You can opt to equip the standard ammunition clip onto the Magnum, or go with the larger-capacity ammo drum.

You can also attach the silencer part onto the Magnum.

Other optional attachments for the Magnum include a gun stock, an under-barrel grenade launcher and even a targeting scope for sniping. Feel free to slap them all onto the Magnum all at once for some serious weapon customization.

Piloted by Uchuta Kamie of the Kamie Clan, Uchuta is a 15-year old who is a bit more mature than Kappei, but still shares the same attitude towards charging into battle head first to stop the Gaizok. He also secretly envies Kappei, whose family is devoted to stopping the Gaizok and protecting the Earth, as the Kamie Clan never shared such interests in fighting the Gaizok.

Armed with the giant “Crusher Drills”, the “Big Missile” and the “Big Cannon”, The Zambull is a heavily-armed fighting machine. The unit can also fire Zambot 3’s Arm Punch attack even when not combined. In the original concepts, the Zambull also had the ability to transform into humanoid unit, but the idea was later scrapped.

For better proportions, Bandai included an optional, larger add-on “chassis” for this unit.

Piloted by Keiko Kamikita of the Kamikita clan. Keiko is the only female member of the team and is very strong-willed, even at just 14 years old. The Zambase functions as both an attack and support vehicle for the other units, providing reconnaissance intel as well as transporting the Holster Jet for Zambo Ace when it’s not in battle and away from the King Beal. Keiko also oversees power balance distribution for Zambot 3 once it’s combined.

Take note of the missiles on this unit, mine had missiles that were not glued in properly and fell out. Good thing I noticed it as it fell out. It would be a real pain to have to find something so small after the fact.

In the series, the Zambot machines can only be optimally piloted by youngsters, due to their fast reflexes. Each of the 3 pilots also underwent sleep learning for 6 months (without their knowledge or consent, lol), giving them each the technical skills needed to operate their units, despite being inside the actual c0ckpits for the first time. 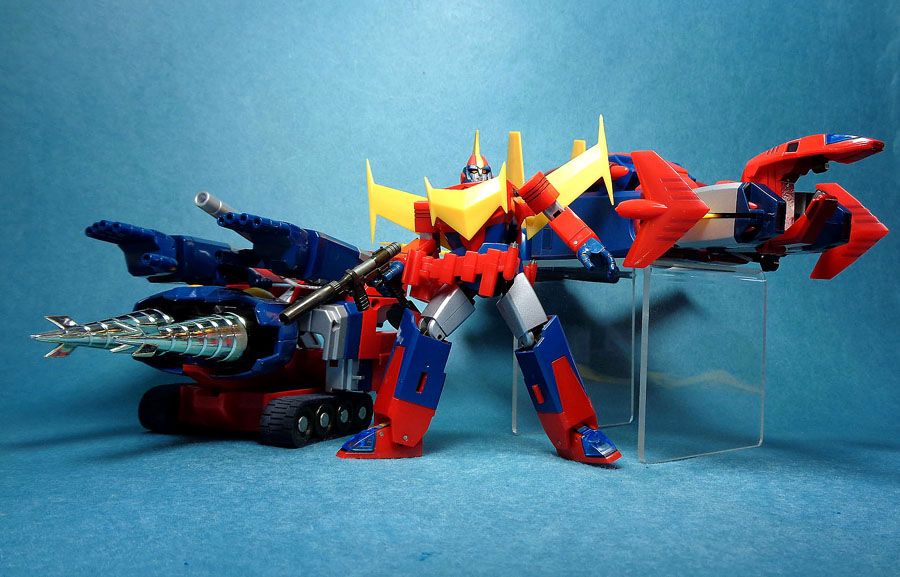 Created by the survivors of the planet Beal, The Zambot is meant to be the Earth’s best line of defense against the coming Gaizok invaders.

Unfortunately, the legs have almost no functioning articulation. Grrr….

This is mostly due to the lack of clearance or any mobility in the skirt plates. 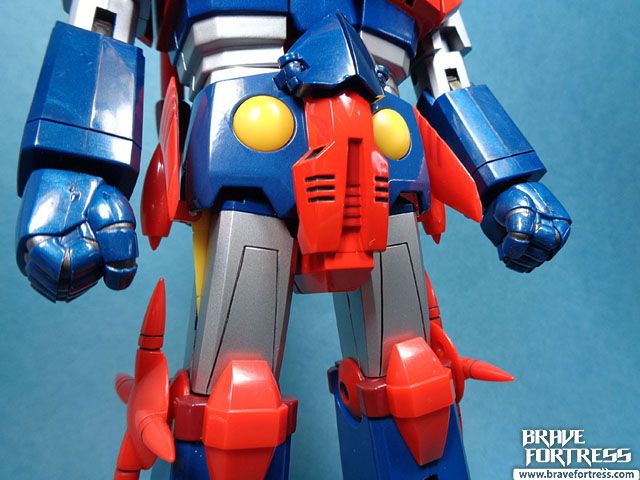 This is as good as it gets for lower leg positioning.

Zambot Buster! – Zambot takes the discs on the sides of the knees and launches them as throwing stars.

Zambot Blow! – Zambot fuses the sais together and they morph into a staffed weapon.

Impressively, the staff for the Zambot Blow is solid diecast metal. Nice!

I think the clear rubbery piece in the tray is used to help Zambot grip this staff better?

Zambot Cutter! – Zambot again fuses his twin sais together to form an alternate bladed weapon similar to a sword.

In order to combine the two sais together, use this pin and then change one of the blades on the sai into the longer sword version.

MOON ATTACK!! -Zambot 3’s finisher attack, it generates a crescent moon beam from its forehead that blasts a hole through its opponents.

Ion Cannon! – Launched from the King Beal mothership (a combined ship using Beal ships I, II, III), Zambot collects this weapon and proceeds to connect it to its internal power reactors to use it as a deadly, wide-area beam attack.

The display base of the Ion Cannon is actually a section of the King Beal ship, it should be yellow, not black though.

Accessories Tree – Instead of a display base, all of Zambot 3’s weapons and accessories can be “merged” together into a single platform. Pretty smart.

-Rolling rubber tank treads for Zambull. Bandai also made the rubber treads thicker, so they won’t break apart over time as easily as Gx-06’s Getter 3.

-Impressive execution of the Zambo Magnum and all of its attachments! This was fun to handle.

-Thanks to the individually articulated fingers, Zambot can pull off some fancy poses with his various weapons.

-Various parts are optional included for better proportions on the Zambird and Zambull.

-I love that the Ion Cannon is included.

-All 3 Zambot units each have their own impressive design merits to stand on.

-No real display base to put Zambot 3 on.

-No light up effects for the Ion Cannon.

-Connecting the Zambot Grapple requires using a dual peg connection, however note that the pins are really thin and there is a possibility of breakage, so don’t plug the pin all the way in to prevent this.

Zambot 3’s legs. Oh the legs….. how could the Bandai Engineers at the time let this happen? The limited articulation is really bad. It nearly completely ruins the entire experience with what could have been a terrific Chogokin set.


Overall, this could’ve been one of the solid releases. Instead, Bandai really let fans of this series down with one of the worst design fails in a modern toy Chogokin toyline (in my eyes anyway). I still keep hoping that Bandai will revisit this set as an “R” version with improved legs, the Super Mini-Pla Zambot 3 kit showed that an improved, combining figure is very possible, but as the line progresses on, I think the chances of it happening get slimmer every year.

The huge negative aside, the set does offer some really great stuff, from the transforming Zambo Ace with the highly customizable Zambo Magnum, to the really good articulated fingers and weapons of the Zambot 3.

If given the choice between this or the Full Action SOC version, I think I would have to go with both. This would probably be best displayed uncombined, while the FA would be the Zambot 3 that would be displayed with actual decent poses, each would have their own function.

Funfact: The series lasted only 23 episodes. Probably one of the shortest Super Robot series ever.

Funfact 2: Zambot 3 is the brainchild of Yoshiyuki Tomino, who would later proceed to create the Mobile Suit Gundam series following this very show. The large number of deaths at the end of this show would set the trend for his usual approach of killing off a large number of protagonists as well as antagonists (this would be even more prominent in later projects, like Space Runaway Ideon), would earn him his eventual nickname, “Kill ‘Em All Tomino”.

Funfact 3: As a different take on the classic Super Robot genre, the series went with the human race actually really hating our heroes instead of showering them with praise. Due to the repeated battles with the Gaizok, most of Japan is left in smouldering economic ruin, even with the intervention of Zambot 3. The populace at large blames the Beal survivors for bringing their war with the Gaizok to our world. Things take an even darker turn when the Gaizok begin using humans unknowingly planted with bombs to attack the King Beal. Even when the heroes win, they feel like they lost. The biggest shock for a lot of folks at the time was the death count at the climax of the series, where pretty much every hero except Kappei got wiped out in the final battle, not even his dog survived. Brutal!