I can’t believe after 52 SOC releases(counting the repaints, 53 if you count the Iron Castle to be true) it’s finally here!

Freight box each one houses 6 units of Voltes Five

..Because you can’t say Voltes without the “FIVE”

For the curious, the box is actually the same height and length as Gx03 Combattler V, the only difference is the Voltes box is thicker by 30% due to the accessories tray(their styrofoams are of the same size, too..)

Also, the “Popy styled” windows are just cut-outs, hehe no celophane/acetate windows glued to them.

Crewzer One has the following gimmicks
-Opening c0ckpit(“Steve “/Kenichi is just painted red though)
-attachable Crewzer Cutters(those are really sharp!!! No Joke.)
-the white”gatling gun ports” on each side of the c0ckpit slide in and out
-retractable landing gear(wheels don’t roll though)
-best of all – magnetic connection joint to Bomber Two

Bomber Two
-Magnetic connection joint to Crewzer One
-retractable front landing gear
-built in Voltes Bazooka
-ratchet joints in Voltes’ shoulders(none in the elbows though)
-retractable dorsal fins
-attachable diecast landing gear(x4), be warned though, 2 of the landing gears have rubber washers to hold them in place, I’m not sure if frequent playwear will wear them out of tear them badly

Panzer
-retractable pincers
-Laser Sword compartment
-there’s also a part in the c0ckpit that opens up, I’m not sure what it’s for.

Lander
-Balljointed Voltes ankles
-chrome plated Lander Drills
-wheels have “shock abosorbers” in them(press them down they spring back when released ) nice..

A note about “Volting in”
-Make sure the Bomber wings are in the right position, there’s a nub and hole system in the wingslots, that’s where the wings are supposed to lock in.

-make sure the Frigate’s.. uhh.. groin pieces are retracted into the “shorts”, it’s going look like Voltes is having a bad case of chodenji Hernia if those stick out

”We’ll show you the power of Voltes!!”

BTW it turns out the whips/belt doesn’t actually retract, the front belt is a plastic piece that just comes off. 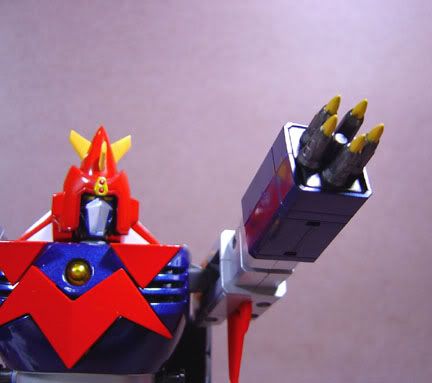 Display stand (what? no sticker? Drats…)

Tank mode(yeah, I know .. it’s a bit of a stretch and it really wasn’t included in the instructions.)

With his “elder brother” Combattler V

Diecast parts
-Crewzer- mostly the entire ship except for windshield, wings and fins
-Bomber – diecast shoulders and c0ckpit
-Panzer – almost everthing but the c0ckpit, treads and tank legs
-Frigate- everything except c0ckpit, wings, towers and connection ports
-Lander-all the red parts(blue parts are plastic) and the ankle ball joint

things to watch out for when handling
– Connecting Panzer and Frigate, I can’t shake the feeling that there’s a paintchip waiting to happen(it’s pretty tight with all the parts coming in contact with each other)

-posing the legs, be careful not to pose the thighs to the extreme, I think I saw chipping in the corners of the the thighs near the “blue shorts” area but nothing major

-Voltes’ head can’t turn that much(which made it hard for me to do action shots.. he just mostly looks forward)

-Connection of Frigate and Lander.. snap on slots.. although the pieces are made of very, very tough plastic.. give it a decade or so and by then who knows, maybe it might get brittle..? I miss the spring release triggers on the Popy.

Also for some strange reason the Panzer tank legs’ pin can be pulled out on mine(one side only), not to mention the “hubcaps” on one of the Panzer wheels also came off(not enough glue used?) anyone else encounter this?

Finally as a parting shot. Voltes was in this pose(I modified it a bit) when I saw him for the first time 23 years ago in the opening sequence on a Betamax tape(the US English dubbed one with 5 episodes).

Thankfully Voltes can support the heavy sword. You just have to carefully balance it right and not abruptly release your supporting grip on the sword otherwise the arm will come swooping down(regardless of the shoulder ratchet joint, given the right momentum).

Please also note that in all the pics, Voltes is slightly tipped backwards to balance his center of gravity, no way can he hold the sword forward and not topple over from the weight.

The fist seems to hold the diecast sword’s weight

He can also do the “lighting” pose while holding it.

Hehe, Combattler’s not the only one with the dual blades anymore now is he?

Finally, a box comparison shot with the Gx03 “legit” diecast twin lancer, the “Soul” Tenkuken box is bigger and thicker.