A wad of styrofoam padding is included. This is to make the box wider, so it goes well with the new S.H. Figuarts (Japanese) Spider-man.

The Spider Machine is actually has diecast, ala Hot Wheels or Tomica cars. Nice.

The set comes with a mini Spider Machine GP-7 for docking with Leopaldon/ Marveler.

Also included is a mini Spider-man figure to pair with the Marveler.

“I am the emissary of hell!”

Personally, I think he should be smaller to be in scale with the Spidermachine. 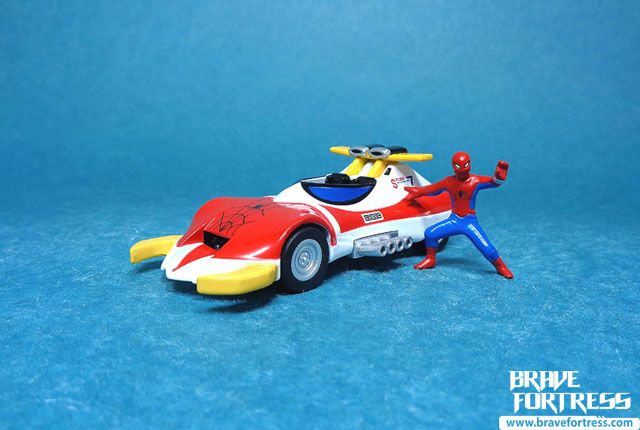 In the series, the Bracelet ejects the “Spider Protector” costume that instantly wraps around Takuya, giving him the powers of Spider-man, along with the ability to summon the Marveler and transform it into the mighty robot, Leopaldon.

The bracelet also functions as a webshooter for Spider-man, shooting “Spider Strings” (a rope made of webbing) and “Spider-Net” (a web-like, wide area net)

The Bracelet is in 1:1 scale, so you can wear it on your wrist, all thanks to the handy use of velcro straps. 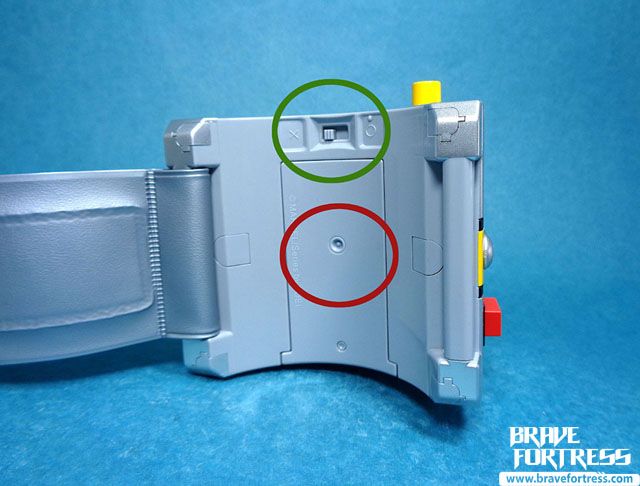 The electronics run on 2x AAA batteries. Batteries NOT included.

Interestingly, the manual has English translations for how to work the electronics (just the electronics section is translated.. sigh.. ). I really hope Bandai keeps this up for all future releases with electronics, usually they’re inconsistent. 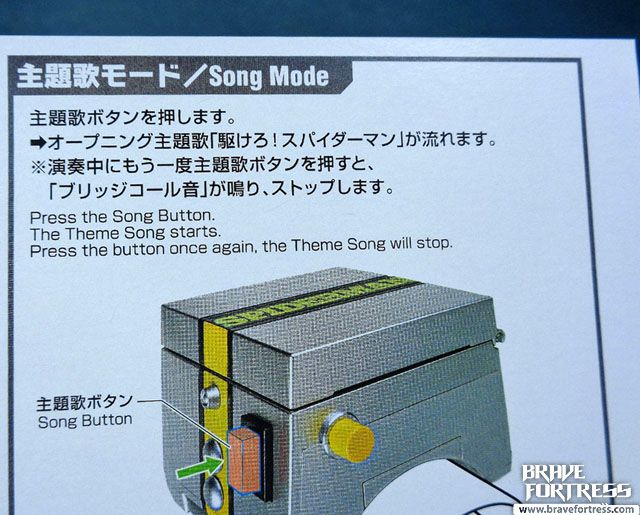 The way the electronics work is, open the cover, and after 3 beeps, the music will play. If you want to hear Takuya “summon” Marveler, you have to press the yellow button again before the third beep, otherwise, if you push it after third beep, it will turn off all the electronics.

It’s… tricky to get the timing right. I wish they didn’t incorporate everything into just one button (the yellow button is the only button you can press out of the whole panel).

The console also has blinking LEDs.

Mini Spider Machine GP-7 docks into the back of the lion head.

When Takuya Yamashiro and his space archaeologist father discover a crashed spaceship, the Marveler, Takuya is bestowed the Spider Bracelet by the last survivor of planet Spider to become Earth’s Spider-man. Armed with new powers and the mighty robot Leopaldon, Takuya fights against the invading alien forces of the Iron Cross Army. 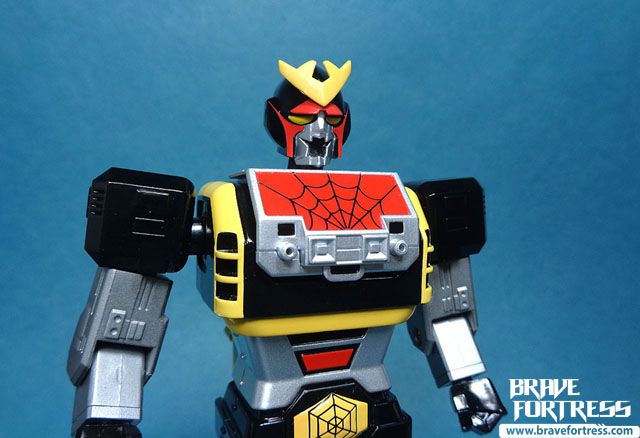 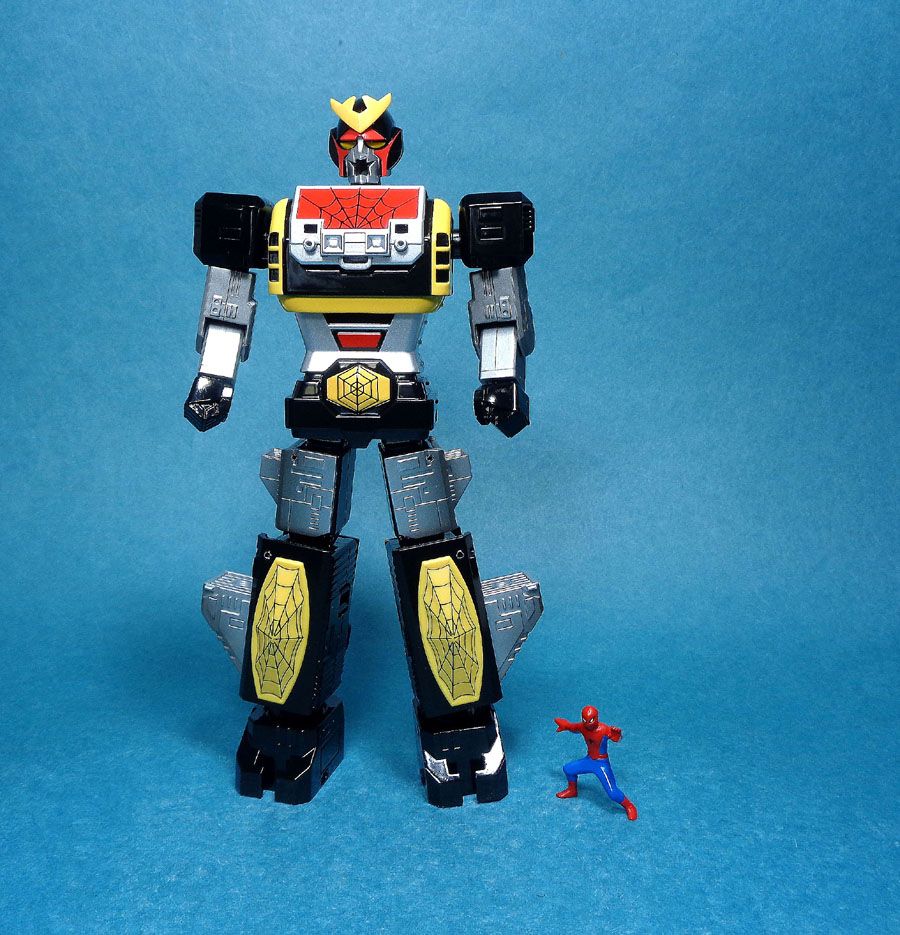 The fists can be swapped out, but it’s a huge pain to do, thanks to the inner pin being hard to grab hold of. I usually plug the whole assembly with the fist into the arms, then push upwards to pop the fists free of the ball joint to make the swap.

When connecting the shoulders, do note the orientation of the slots. 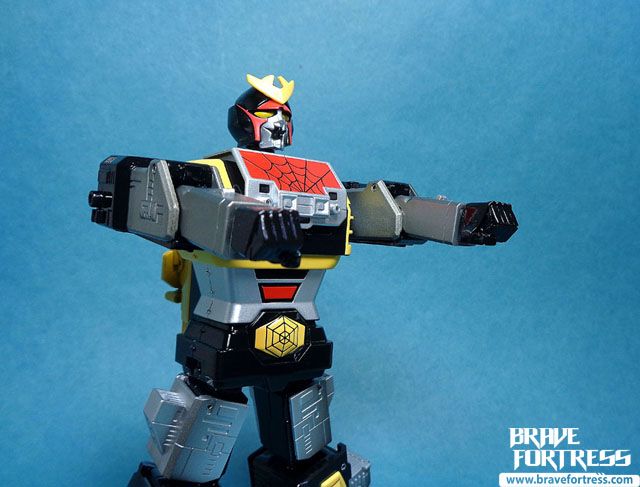 Swapping in the weapon-holding fists somewhat solve the problem of the forearms being too short, I guess.

The base can be opened up (similar with how it was with the original Gx-33). 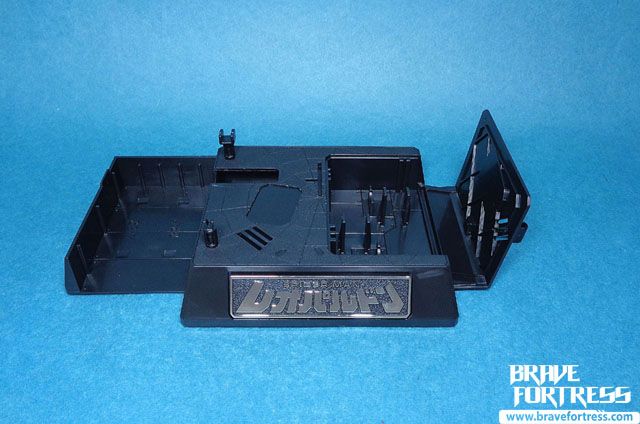 “Parking” for the Spider Machine GP-7, it even features grooves to keep the car in place.

Display base can be set to display either in Leopaldon or in Marveler modes.

Mini Spidey has holes on the surface of the base to hold him in place. 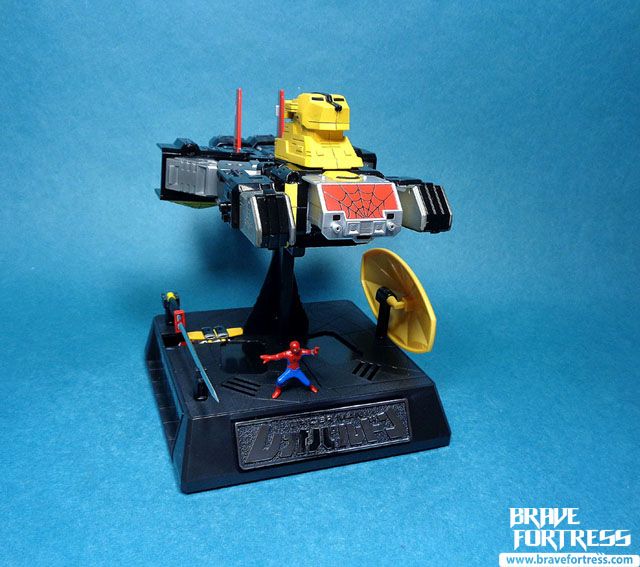 Marveler is a bit tricky to clip onto the attachment arm, since you’re worried you might chip the paint, but once it’s clipped, it’s very secure and won’t fall off easily.

I was hoping to do comparison shots with the original Gx-33 Leopaldon release, but it seems I’ve stored him somewhere and forgot to list down exactly where (same box with the old Gx-29 Black Ox, most likely). I will have to revisit this post again down the line and do an update for the comparison shots.

-This little piece folds in neatly. I wish all of Bandai’s SOCs have this (looks at Tryder, SMH).

-Hidden mid-torso articulation is a nice touch. It was present on the original Gx-33 too.

-Thanks to all the diecast, there’s some real heft to the figure when you hold him.

-Arc Turn still works on a hair trigger, so be careful!

-Same as the original Gx-33 design for this guy, the thigh and waist articulation are all very, very limited.

-The backpack tends to spin 360 degrees when the Leopaldon head isn’t in the backpack (just like in the Popy toy), can get a bit annoying. Wish there was a locking mechanism for it.

-No “Soul of Sofubi” 6-inch vinyl Spidey here, with the original release came with one.

-No new improvements on the actual toy from the original release.

-Waaay to pricey for something that just adds an electronic trinket to the Gx-33.

Baby arms… I was reeeeally hoping Bandai would address this. How in the world is this even acceptable? Worse, it’s now happened twice??

Overall, not bad, but not great. It’s still really heavy, lots of bonus features and this guy was heavily featured in the recent Spider-man “Spider-verse” comic crossover events in the US Marvel Comics back in 2018. Plus the toy is still fun to handle.

Though, for an “R” release I was really wishing they retooled some of the things with the actual toy (those baby arms!), plus for the prices they are charging for it, they really still should have included the old Sofubi Spider-man that came in the original Gx-33 in this “R” set too.

Sadly, it’s pricey for what it is. We’ve seen Bandai release the “Dragon Ball Z Dragon Ball radar” and other electronic goodies as a candy toys for less than what they tacked onto this release just for the Spider Bracelet. The good news is, it’s on deep clearance right now as of this writing (Jan 2021) on certain sites, like Amiami. With the discount, it more or less comes in at the same SRP as the original Gx-33 and I think that makes it worth checking out.


Funfact: The Leopaldon suit was actually stolen in the middle of producing the later episodes for the show, with lack of budget and time to make a spare one, the producers went with reusing stock footage with heavy editing to wrap up the final battles of the series.