Walker Machines, they require assembly and aren’t pre-painted like the Xabungle and Walker Galliar. Comes in black and beige, you can mix the colors up.

The chest panel opens up to reveal a Hangar (complete with retractable steps for human maintenance crew, there’re also two versions of the cover panel for the back of the hangar, I have no idea why).

Bridge (there are two vesions of the face plate cover, I’m not sure why that is since I’ve never really watched the Xabungle series, if anyone can shed some light on this it would be greatly appreciated). 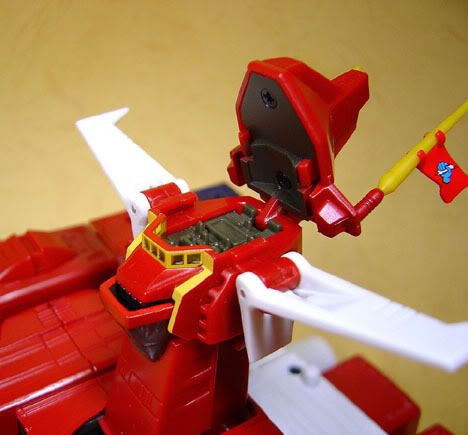 Hidden cannon in the hip area.

Comparison with the SOC Xabungle and Walker Galliar.

Comparison with the SOC Ideon (Iron Gear is the tallest SOC now standing at 11.5 Inches)

Action! (the leg articulation is limited to only one click at the thigh and knee level. Still, it beats not having anything there at all.)

The Good
-The Iron Gear is good to go right out of the tray, the only minor assembly required is maybe the flag and the faceplate cover accessory (for Landship mode) and the panel for the chest hangar.

-A lot of Walker Machines to help “populate” the Iron Gear perimeter. The Goven Class ship is also a nice addition.

-Opening maintenance hatches (again another nice bonus, instead of just a simple toy they went and added something extra).

-Given that it doesn’t really have any feet, the toy still stands up pretty well, even when posed.

-Limited leg poseablity but there is some (unlike say… the Zambot 3. That was just sad).

-Ratchet jointed thighs, knees, shoulders (none in the elbows, however).

-Diecast parts mostly in the chest (except hangar hatch), lower section of the hips, the bar used to shift the upper body around, the whole thighs and back half of the lower legs (front half is plastic).

The Bad
-Some additional fists would’ve been good.

-It would’ve been nice if all of the Walker Machines came pre-painted, but I guess that wouldn’t have been cost-effecient.

-A display stand with a shiny nameplate is sorely lacking.

-Some of the connection ports are plastic, it might break later on (?).

-The hip level locks for the holding the legs when in Landship mode don’t seem to hold up very well. I didn’t dare try to lift the landship by only holding just either the front portion or rear portion for fear of something breaking. I recommend holding it at both ends when lifting up the Landship.

-Not much else in terms of negatives. I didn’t encounter any messy paint applications (even on the tiny Xabungle figurines) or missing parts. It would’ve been cool if they put in some electronic light gimmick of some sort maybe, but that’s just me. 🙂

The Ugly
-I can’t really find anything wrong with the toy. Hehe Bandai quality control must be really improving.

Overall, I’m pleased with the Iron Gear, it almost makes up for the Xabungle and Walker Galliar (sorry but those two are at the bottom of my SOC list, due to the size and fragility of some of the parts). As far as the Iron Gear goes, it’s pretty solid, no real quality defects and it’s a great addition to the big SOC group.