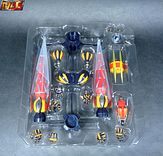 These little pieces are the connectors for the Mach Drills.

Bike wheels can bee seen in the back.

In the old 1970’s series Jeeg’s moves were primarily wrestling based (grappling and such). 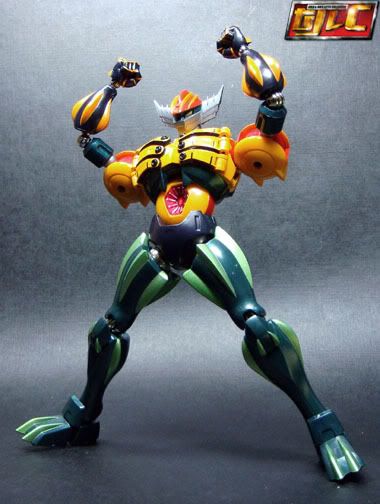 The bazooka attaches not just by the magnets but also a secondary peg is present for extra support.

As big as the Jeeg Bazooka is, it should actually be bigger.

Everything can be neatly displayed.

The Bad
-Plastic feet (this was a turn off for me, with Reideen it was okay since if the feet were diecast then the “God Bird” would tip backwards, but with Jeeg, I don’t see any reason why the feet should be plastic)

-Plastic “Spin Storm” tummy, what’s up with that? I was really hoping at least the whole torso was diecast.

-Changing the fists are a chore, make sure you have a pair of pliers on hand. Grip the peg at the joint (make sure to wrap the joint with something to prevent tool marks) and pull.

The second part is the bicep and elbow joint, note that the bicep can be “unsheathed” to reveal the inner diecast rod.

-The “Jeeg Crusher” spikey shoulder accessory is very loose, there’s no clicking lock on mine (it clicks perfectly on the normal shoulder), it just sits there in the pic. Did anyone else encounter this?

-A minor quibble, I think it would’ve been really cool if the display stand had optional props to hold up Jeeg in “build up” mode like how they did King Joe.

-Another minor quibble, while the Mach Drills do spin, the columns don’t spin in unison (you have to spin each segment manually) . It would’ve been cooler if it could spin in opposite directions per segment, per column, in unison, like a regular multi-layer drill bit.

-The thighs! Although I know this is the fault of the toon design, it’s still a bit difficult to get the legs to come close together to fit on the display stand feet grooves due to the thick thighs! Likewise, the awkward groin joint (magnet) makes the double jointed knee pretty useless since the leg can’t really go up to “crouching” level.

-Elbow joints are a too stiff, elbow connectors too loose. I found it easier to pop off the forearms, then bend the joint and reinsert the forearm to do poses.

The Ugly
-While the magnets do hold tight (very tight, which is good) the other joints are terrible! No ratchet joints in sight, and since Jeeg is a bit top heavy, it tends to fall over (weak knee and ankle joints on my unit).

Case in point, I went to answer the phone while doing the photoshoot, this is what greeted me when I came back. lol!

Better make sure not to leave Jeeg in awkward poses on your display shelf. He can stand, just don’t leave him in action poses (*Note that this could just be a problem limited to my unit though, mainly due to a weak left knee joint)

In conclusion, while I was initially really excited for this toy when it was first announced, it left me somewhat disappointed.

There are good things about it (great detail, really solid magnets), but the negatives are really somewhat disappointing for an SOC release (a few simple ratchet joints would’ve fixed the biggest problem IMHO).