Please click on the thumbnails if you want to view larger images.
Box 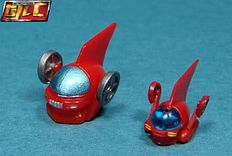 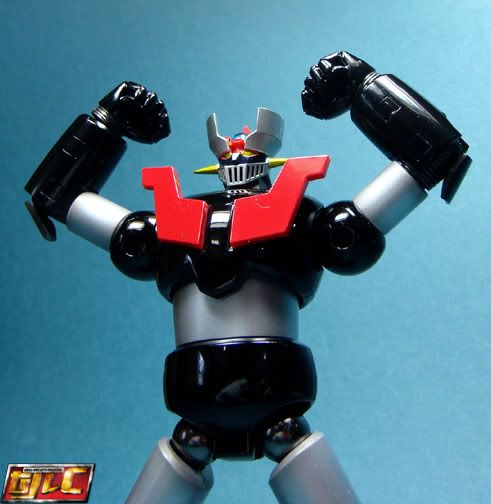 Scrander sides slide up and down.

There’s no sliding gimmick for the Scrander unlike the previous SOC Mazingers. To change the wings’ position, you have to manually disconnect the wings and reattach them. 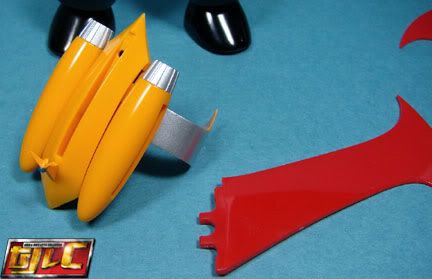 Adjusting the support arm will make the stand able to support Shin Mazinger in “Flight mode” pose. I forgot to try this with the Gx-01R though.

Display base comparison with the Gx-01R base (Shin Mazinger on the left).

Extending the ankle and thigh sections will increase the Shin Mazinger’s height by roughly half an inch.

With the rest (Hehe, I forgot to include the Gx-07 OVA Mazinger Z. Doh!)

The Gx-45 gloves set. Supposedly these are limited(?) to first batches of the toy (or so I’ve read on some Japanese review sites). They are packed separately from the Gx-45 Shin Mazinger Z.

The Good[/b]
-Weighs 320 Grams. This figure still maintains a good deal of weight, given it has scaled down a bit compared to the Gx-01R (the GX-01R also roughly weighs 320 Grams).

-“Breast Fire” chest pieces are stuck in place (the falling pieces off the old ones annoyed me to no end).

-Good improvement on the wrist joints, making them ball-jointed adds a lot of playability.

The Bad
-No God Scrander. I would love to have one even if Maz doesn’t transform into a fist.

Although the elbow plates are articulated, they can only go so far, so the plate tends to stick out like a sore thumb in some poses. I fail to see the reason for this, since it’s not as if the elbows are double jointed. It’s not toon accurate either since we never see an elbow plate like this separated from the forearm in the Anime. Strange.

-Super SHARP POINTS on the Scrander. I literally stabbed myself by accident from minimal contact on the yellow tips, so be careful.

-Possible scratch points? I’m not sure but these marks appear on mine when I pop out the extension joints.

The size, unless the joints are extended, the toy looks significantly small compared to the other Mazingers in the SOC series. The weird part is, the ankle joint is pretty useless unless it is extended, you can hardly move the ankle unless you pop out the joint first. I don’t see why Bandai didn’t just release the toy with the ankle joints as is, no need to extend out.

In conclusion, while this is a good toy, the size really is a let down. Bandai pulled off a great posey modern Tetsujin Go in Gx-44/S without having to compromise height, so why the change a winning formula?

I suppose one could pose it solo, away from its SOC brethren as a means to make the height difference not so apparent.

On the plus side, the articulation is really good and you can do a lot of fun poses with it. Admittedly, I really did have a lot of fun posing this one more than most non-combining SOC (I personally think the ball-jointed wrists really added a lot to the toy). The display stand for posing Mazinger in flight mode is also a nice bonus. It’s definitely worth checking out if you’re a fan of the new Anime.