The box is nicely done, in that it’s a mirror image of the Gx-45 Shin Mazinger Box (Shin Mazinger’s box is thicker though).

*Spoiler* It also should be noted that in the show, Energer is actually the same color as Mazinger, it only later changed color when it was about to go into Full Photon Meltdown.

Hmm.. guess the scale is off?

Being of the same body as Gx-45 Shin Mazinger, this figure can basically do all of the same poses.

For those curious, the Hover Pileder can’t fit into the Energer Z receptacle.

Essentially, Energer, even not yet in Photon Meltdown mode, kicked Mazinger’s Gokin butt. 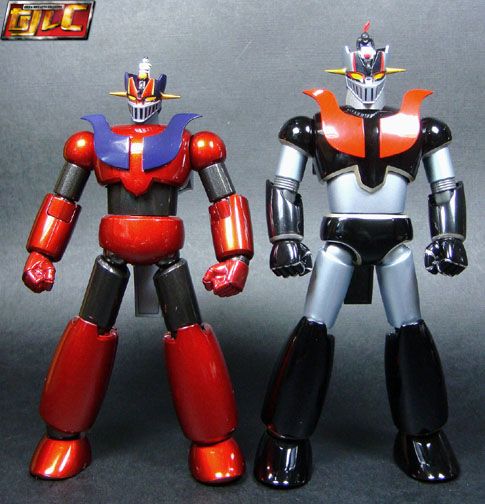 The access ramp is different from the Gx07e Energer, it’s now lacking the joint, likewise, don’t believe the promotion pictures, there’s no way to make the Tetsuya/Kenzo bike “stick” onto the ramp.

Overall, a decent toy, at first I hated the color scheme based on the promotional images but seeing the toy first hand quickly changed my opinion of it, it is somewhat eye-catching on any shelf and given the choice, I would have prefered this color scheme as opposed to Bandai releasing a straight up black colored Energer Z (again).