The manual is actually a bit thicker this time, it comes with pages full of illustrations from the Anime.

Chains for the Moby Dick Anchor are underneath the display base.

Chain placement orientation on the tray.

Not much has changed from the original Griffon, it’s still plastic and still does not have wheels to roll.

The underside is painted though (same as the original Gx-48). 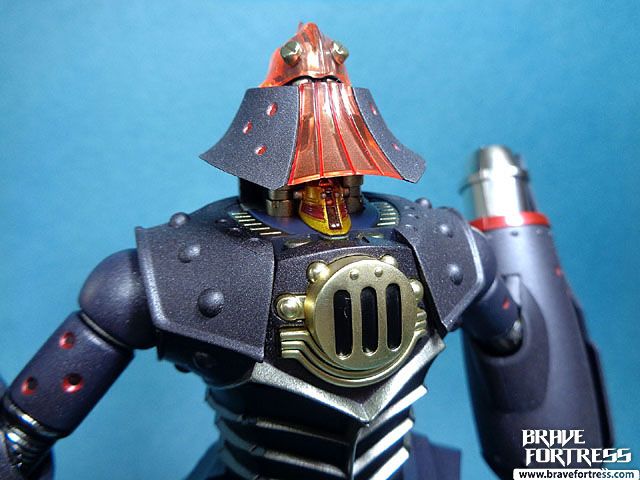 Originally released almost 10 years ago (2009), Bandai decided to rerelease this figure in the SOC line, this time sporting an new “matte finish” paint job on most of its body, along with the Web Exclusive weapons pack from back in the day, all in one tidy package. 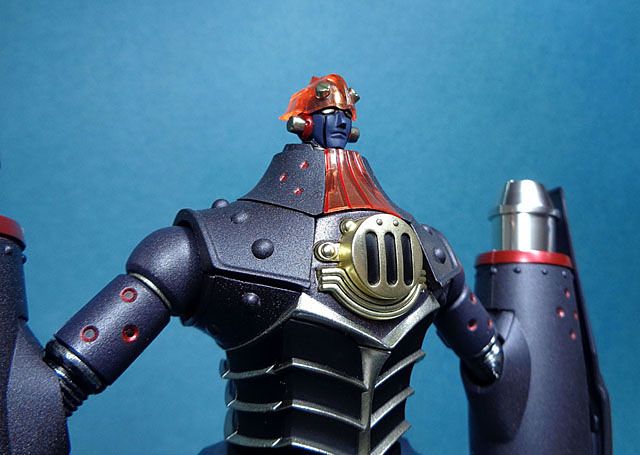 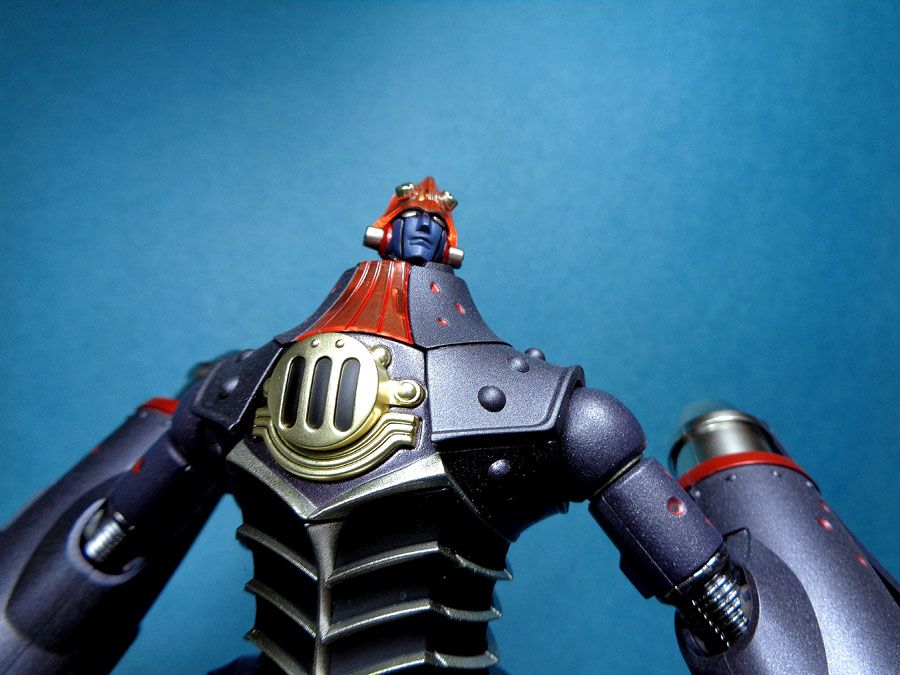 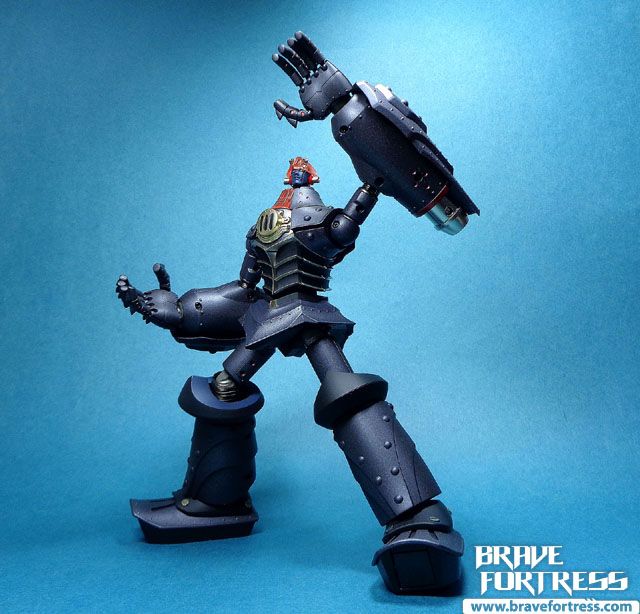 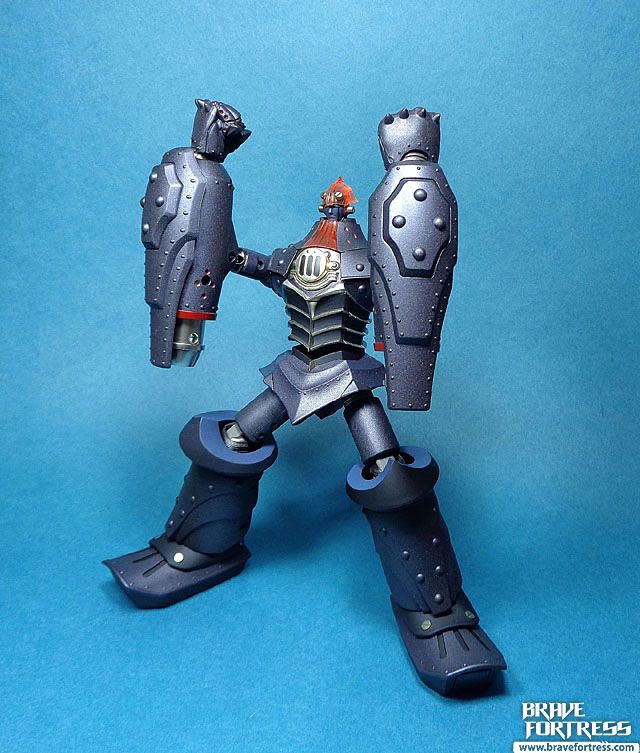 Same as the original, Big O still comes with 2 spare heads, one is the archetype head (as seen in a flashback in the Anime) the other is a bigger, more proportionate head. Be warned though, the bigger head won’t allow you to do “c0ckpit access” mode (head won’t fit into the collar).

Big O’s knees and groin joints can be hyper-extended to add to his range of motion. This will also increase his height by roughly an inch.

Both arms can do Sudden Impact.

Attaching the “sunken” hands may be a little tricky, depending on which arm, the wrists needs to be rotated either clockwise or counterclockwise for the wrists joint neck to be inserted or removed.

To attach the hands to the O Thunder arms, you will need this adapter plug, which is already plugged into the “open palm” accessory by default in the tray layout. 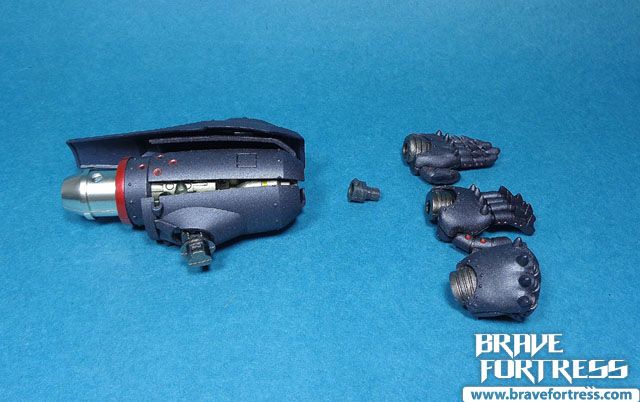 The O Thunder arms don’t have any action this time for the Sudden Impact, the “Strike Pile” only functions to help push out the cannons. 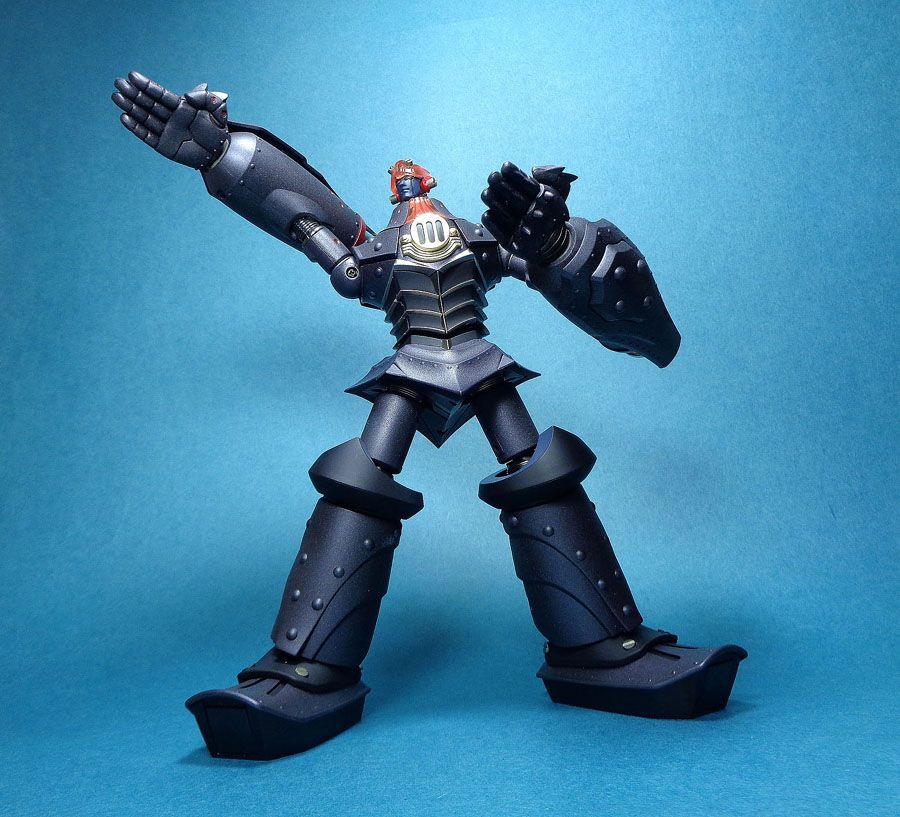 Different types of anchors to attach.

I found it easier to remove the skirt plugs by rotating them first and then pulling them out using the newly exposed edges, as opposed to directly pulling on them, as you don’t have much surface contact to grip.

Do note that the skirt plugs are position specific. You can’t arbitrarily just plug them anywhere when returning them to the skirt.

Moby D!ck Anchor in action! ( I really, really love the musical score of the Big-O series. 🙂 )

Under side of the base says “Cast in the Name of God, Ye not Guilty”

The name plate is also now regular silver instead of shiny chrome.

Original display base configuration of Gx-48 (without weapons pack accessories and display base).

The corners of the default display base have to be removed and re-plugged into an inner section underneath the base to accommodate the parts for the chain plugs. Note that the corners are location specific when you’re returning them to the original configuration.

Both versions of the display base cover are included. One is from the original base design (before the weapons pack was released) and the other has a parking slot for the Griffon (Griffon was only available with the weapons pack). 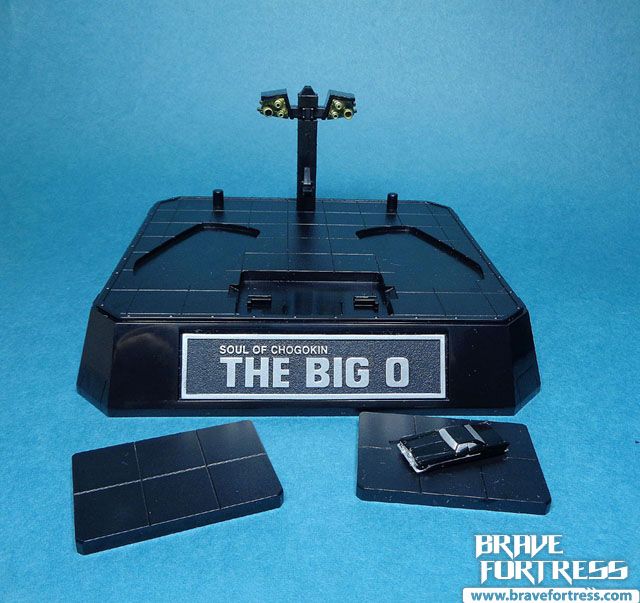 Comparison with the original Gx-48 set

Display base color is now black vs ebony (?) on the original

Brighter pink and the plastic is more opaque on the new O Thunder effects parts (left).

Everything is now on a tray, back in the original, the parts for the expanded display base are just packed in a baggie.

Be mindful of how you pose Big O’s feet. Thanks to the matte finish, surfaces tend to show scratch damage more visibly. I found this out the hard way after doing the photoshoots. There’re some scuff marks on the foot plate from contact with the leg armor. Sigh…

-Big O weighs roughly 544 Grams and stands rough 8 inches tall (9 inches if you extend his knee and groin joints). By comparison, the original Gx-48 weighs 539 Grams. So I guess the Kurogane finish adds 5 grams of weight to the toy?

-Pistons in the legs (you can see them when you lift up the toy).

-Groin and knee joints shaft out for wider range of articulation.

-Strike Piles are now repainted regular silver instead of chrome to match the matte finish on Big O.

– Can’t really do the “blocking” pose like in the Anime due to limitations with the arm design.

-The Kurogane finish, while cool, was already a concept that Max Factory already cooked up with their Max Gokin Big O release a few years back. So it’s not really a “fresh” concept. Sorry Bandai.

-Nothing new is added to the toy, it’s a straight up redeco.

The price, ouch! Folks were really disappointed when they rolled out the original additional parts set a while back as a Tamashii Webshop Exclusive. The set got really pricey fast. Fast forward to today and Bandai doubles down on the concept and releases the FULL SET as a Webshop Exclusive. C’mon Bandai….

Overall, it’s okay. I would totally love and recommend this if it was a mass retail release, since the Big O Anime is cool and has a lot of appeal especially in the US where it was a hit back in the day (compared to how it fared in Japan), but as is, it’s too darn pricey due to it being a Tamashii Webshop Exclusive. Someone once told me that the “Kurogane” matte finish process costs more to do than regular paint, which then increases the base cost of the figure. I don’t know if this is actually true, but if that was the case then I would’ve rather Bandai just rereleased the whole set without the Kurogane finish just to give folks who missed out on the original set a better deal. I guess this is one of those figures that’s meant for completists. Too bad.