Bakuryu’s box is the biggest among the three released.

Background on Zerokage:
Planet Lodario is invaded by the Zaboom forces, the Princess Romina escapes aboard the Elshanc/Xenos 5 with the three mechs (with the Tobikage revealed to be the secret forth mech hidden inside a secret chamber in the Elshanc, unknown to all).

She escapes to Earth in search of ancient warriors called ninjas, whom here people encountered centuries ago. For whatever reason, the ninjas are the only ones who can pilot the 3 mechs (even though the mechs were created using Lodario science). On Mars colony, the Elshanc encounters Joe Maya’s group. In the heat of several battles they each discovered they are in fact descendants of the ninjas and can operate the mechs (what are the odds, eh?)

Ylbora Saro was a member of the Lodario forces (a general, in fact). He later turns traitor after becoming jealous of Joe Maya’s victories in battle and the Princess Romina’s growing affections for Joe.

In a battle with Joe, Ylbora is defeated while piloting the Skeleton. Zerokage (I’m not sure if it was created by the Zaboom army or found by the Zaboom army) becomes active and merges with Ylbora, it’s later theorized that somehow ninjas got onboard the Lodario exploratory ship from centuries ago and mingled with the Lodarians and Ylbora is a descendant of one of those ninjas.

The ending isn’t exactly clear whether Ylbora did actually die or if he was saved as a mysterious light flashed on both Joe and Ylbora and both of them “merged” with the Elshanc’s main computer (?) and the Elshanc then auto teleported back to Lodario, to save it’s people from the remaining Zaboom forces. It’s not shown either whether Joe and the group come back home or who he eventually chooses, Renny or Romina.

Giant Shuriken can be attached to Zerokage’s back via optional peg.

Makibishi Launchers (fired from the chest, no gimmick for it in this SOC) 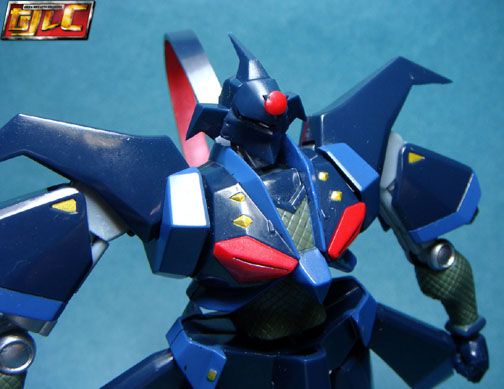 Twin daggers (scabbard can also be attached to Zerokage’s back)

Zerokage’s katana differs from Tobikage’s in design. Strange though Zerokage’s long katana doesn’t have a scabbard. 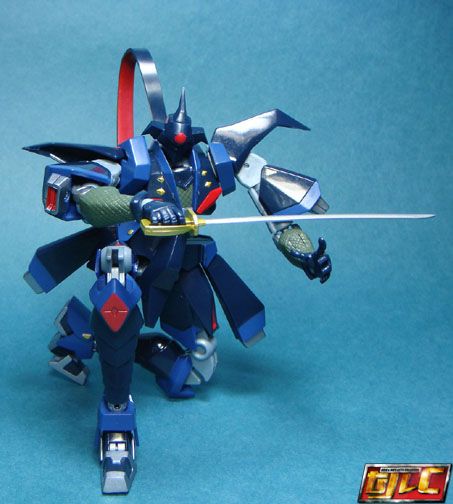 The Bakuryu changes into Kaima (Sea Demon) mode when combined with Tobikage.

As you can see, using the Gx-54 Transforming Tobikage might not be the best way to do it, it’s very small and does not seem to look right when attached, there’ aren’t any problems with it per se, as it locks in place very well. It just looks disproportioned with the Bakuryu.

Comparison with other “Tobikages”. I forgot to try it but I don’t think the Gx-56 dummy piece will fit in the Gx-54 (it’s too big).

Bandai included an optional smaller Kaima head (default head is bigger, for robot mode). The smaller head actually does seem better proportioned than the default head, but not an absolute necessity for aesthetics (unlike, say, on the Gx-46 Aussenseiter), you can hardly tell the difference unless you place both heads side by side. Both heads can open their maws, too.

The Good
Diecast parts include:

Bakuryu:
–Toes (front only)
–Claws
–Most sections of the torso
–Some of the main joints

-Bandai improved the packaging, this time there’s an internal cardboard shield to prevent the box from denting at the corners(about time).

The Bad
-Swapping Zerokage’s fists can be a pain, I found doing it harder to do here than on the Gx-55 (Action Type) Tobikage, I recommend popping out the entire forearm at the elbow joint to give you an easier time. Likewise, removing the block for the wrist-mounted chain launcher is harder to do here, I had to use mini screwdrivers to wedge it out.

-Parts swapping required. Particularly the “backpack” and having to remove the fists when transforming. 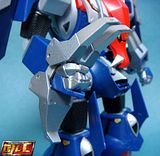 -Zerokage falls over waaaay too easily, I don’t know if it’s the relative lack of diecast in the legs or the top heavy shoulder armor, but sometimes he tips over with minimal force, compared to the Action type Tobikage. Something worth considering if you plan to display him close to the edge of a shelf.

-Bakuryu leg armor transformation seems kinda floppy. It doesn’t fall down too easily but somehow it feels that it could’ve been better.

-Hollow front toes on the Bakuryu, what’s up with that? Bandai could’ve just slapped on plastic cover plates on it.

The Ugly
Personally I really had a tough time folding out the Bakuryu torso for Kaima mode, the joints were super tight on mine! It was harder than it had to be.

Well, overall, the Gx-56 is a decent release, nothing exceptional, but you will need to get it for completing the set. I find I still like the Gx-55 Houraioh better compared to the other two (Kurojishi’s outrageously tight joints, lack of a “dummy Tobikage piece” really dragged it down IMHO).

Funfact Bakuryu in Kaima mode seemed to be the most powerful of the three, thanks to it’s insanely powerful thunder attack, strangely, the Kaima mode only appeared twice in the whole series. If they wanted to, the heroes could’ve easily won every battle by just spamming the thunder attack, without even having to deploy the other two mechs. Guess the heroes wanted a challenge…?

Funfact 2 In the original “unedited” series, we actually get to see Renny in a shower topless scene. LOL. Censorship can be a funny thing in Japan.