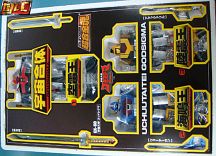 Kurai Ken (generates from Kuraioh’s forearm in the Anime) 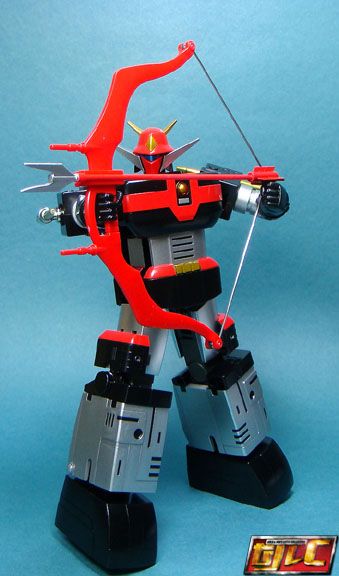 Aside from the Kurrai Kyuu, Kuraioh also has a forearm-mounted crossbow that’s also called Kurai Shot and he is the only mech that can launch his fists from the wrists (Kurai Punch)

Kaimeioh’s arsenal also has knee missiles and Ice Blizzard attack that can be vented from his chest.

Kaimeioh also has repair capabilities as shown in one episode.

Rikushin Hammer (pops out from his chest)

All three mechs are impressive together due to their size, the first time I opened the tray seeing the actual size of the figures really gave a great first impression. Here they are next to the GX-01R Mazinger Z.

Apart from the standard weapons, God Sigma has on occasion use several attacks from his component units (like the Kurai Shock, Ice Blizzard and Double Chain). 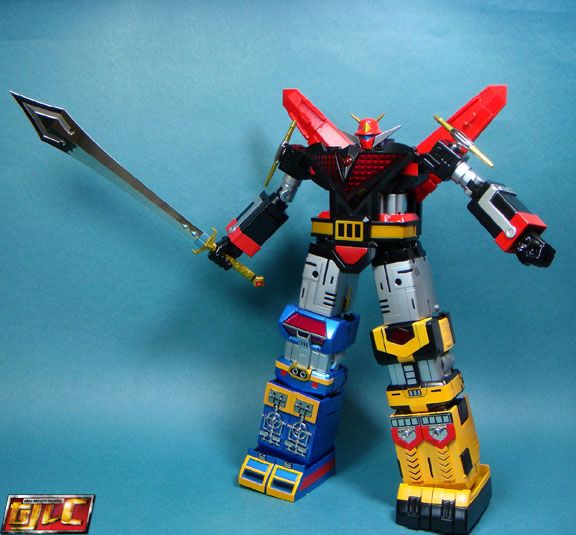 God Sigma has various finishing “slices” in the series.

With the arrival of Commander Gagaan and Colonel Mes, the Eldan Cosmosaurus armors get upgraded in episode 27. God Sigma’s Musou Ken is broken and he nearly gets defeated. In the following episode, Professor Kazame upgrades the Big Wing to have a new attack to weaken the enemy armor– the Sigma Breast. 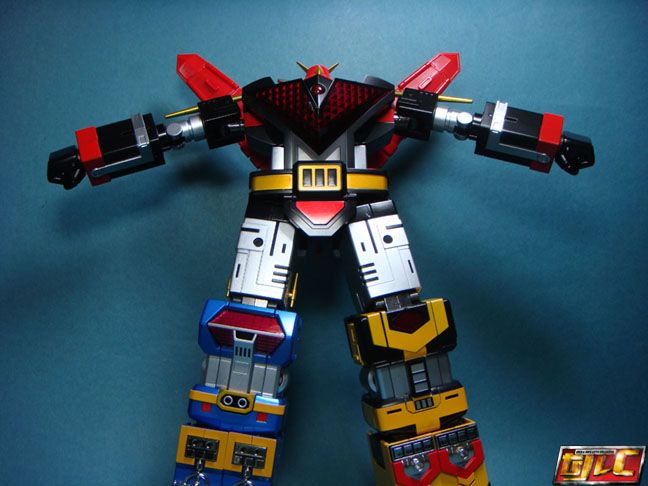 Big Wing Attack:
God Sigma only used this attack twice in the show. The first time was to take out a huge ship. The second time was in the final battle against Gagaan. With all of it’s attacks useless, a badly beaten God Sigma used all of it’s remaining Trinity Energy stores and used the Big Wing in a final “all or nothing” attack on Gagaan’s final Cosmosaurus. It succeeded but it smashed the God Sigma as well, the pilots had to abandon it and fight on foot.

Things to look out for!!!:
-Kuraioh’s legs

When transforming into God Sigma, you will need to “eject” this block from Kuraioh’s legs. when returning, do take note of the orientation of the block.

The knees only bend one way. If you inserted the block facing the wrong way, Kuraioh’s knees will no longer bend due to the wrong orientation and you will have to eject the block again, only this time, if you did insert the block wrong, it will be stuck so you will need a Philips screwdriver to help eject it. Not fun, I learned it the hard way….

I STRONGLY recommend plucking them out entirely as opposed to bending them and leaving them on God Sigma, as the joint is EXTREMELY tough to bend.

Seriously, try pulling out the feet and then bending the metal at the joint with your bare thumbs, now imagine that applying that kind of force on the socket you just pulled the feet from… I think most likely repeated bending of the joint while plugged into the slot holding the joint will cause the plastic break eventually. So just to play it safe, don’t bend the joints during transforming, just pull them out.

When attaching the Big Wing to God Sigma, take note of the front plate, there’s a notch there that needs to be folded down (I missed it in the instructions), be mindful of this.

-When Ejecting Kaimeioh and Rikushinoh, remember to use the ejector buttons found on the back of Kuraioh’s legs.

The Bad
-Fists don’t stay on the display base. I guess the pegs are too small compared to the pegs on the robots.

-Missing Weapons : God Tomahawk. God String, Spin Saucer, these weapons were shown as early as episode 6 and 12, it’s too bad that Bandai didn’t include them in the SOC set. Though I suppose you can use Gx-50 Combattler’s Choudenji Yo-Yo parts if you really need to do the God String effect. Would’ve been nice too if they threw in some Kurai Cutters, and the slingshot/crossbow version Kurai Shot for Kuraioh.

-Swapping the fists out on Godsigma is hard, the holes for the pegs are a bit too tight for comfort.

-Limited diecast sections… most of it is in the joints (which is a good thing) and the only thing that’s diecast and not a joint would be God Sigma’s feet plates and Kuraioh’s thighs. But the combined weight is still impressive (better than Daltanious). I think maybe it’s due to thick concentrated metal joints rather than thin long plates of metal?

-Getting the Musou Ken into God Sigma’s fists is hard!!

The Ugly
No major qualms here, the designers did the best they could in terms of making God Sigma poseable I suppose (since that does seem to be the biggest gripe around I think) but I do really wish they included the missing weapons for God Sigma, there’s certainly a lot of space for a third tray in there. I dunno… maybe Bandai was trying to keep costs down ? By not releasing a saucer and a pair of axes….? Right! ;D

All in all, a decent release, it’s big, but a bit lacking in some departments (articulation, accessories, obvious exterior diecast sections, bigger shield). I think Daltanious still gets my Toy of the Year vote so far.

Good luck trying to get a good box though, unless you get a “case fresh” unit, I think it’s going to be hard to get box that’s not creased or crushed on one corner due to the relatively thin cardboard they used here.

Oh, and if you’re going to watch the Anime, well.. don’t expect awesome stuff from it. The animation is very, very bad at the start of the show (I was surprised at how bad it was), it was like watching G1 Transformers Season3, badly proportioned drawings, clunking movements, lack of detailed backgrounds.. wow.. Given this cartoon aired in 1980, this is a step back from the Super Robot shows that preceded it (Voltes and Daimos). It was about halfway through the show that the animation improved (a lot!).

The battles were also very anti-climactic, like Voltron, once God Sigma formed up, the Musou Ken almost always followed next and one slice later, it was all over, no sense of suspense or danger once God Sigma was on the scene.

Fun notes:
-Professor Kazame, the inventor of the Trinity Energy and creator of God Sigma (not to mention Megaman’s Doctor Wily’s look-a-like) starts out as one of the good guys, but in a surprising twist not usually seen in Super Robot Anime, the creator of the main bot goes totally insane and joins the bad guys!

He slowly becomes obsessed with Eldan time travel technology (it was revealed that Eldans’ are from the future where Earthlings have invaded their home planet). Kazame even keeps preserved corpses of Eldan soldiers who died under his interrogation in his secret laboratory. His true nature is revealed in episode 38, after his secret lab is accidentally discovered. Kazame is ordered under house arrest and confined to his quarters. It’s near the end of the show (episode 47) when he fully defects to the Eldans to gain access to their technology and even goes as far as killing members of the Trinity ship crew in a raid, he is ultimately killed by a Eldan soldier who shot him in the back by mistake.