Soul of Chogokin Gx-68 The King of Braves Gaogaigar

Soul of Chogokin Gx-68 The King of Braves Gaogaigar. 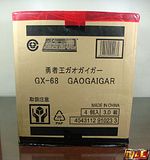 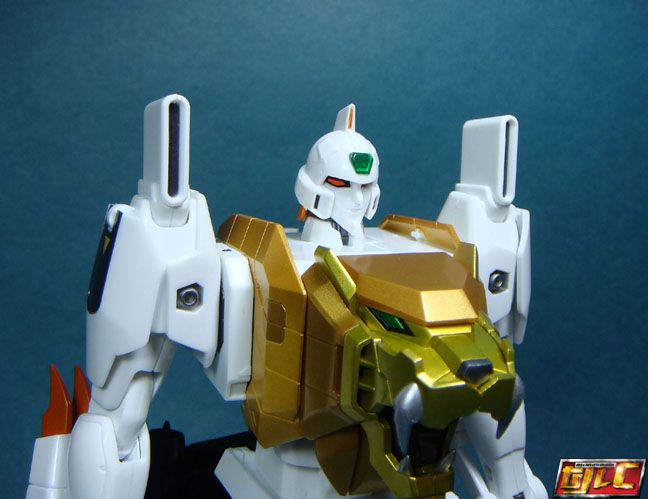 The track treads are now plastic links! No more worries about rubber “melting” away. .

Attaching the Drill Gao to Gaigar.

Gaigar’s shoulder joints are super tight so he doesn’t have a problem holding this pose.

TRANSFORMATION NOTES – There are a lot of nifty bells and whistles when transforming Gaogaigar, plus some other things to look out for.

-Gaigar’s lower legs extend (or shafts when in Galeon mode).

-GGG’s skirt plate can be a bit tricky to fold down in Gaigar mode, it should look like this:

-In Gaigar mode, remember to push the torso to the back, this creates the proper alignment for the figure. 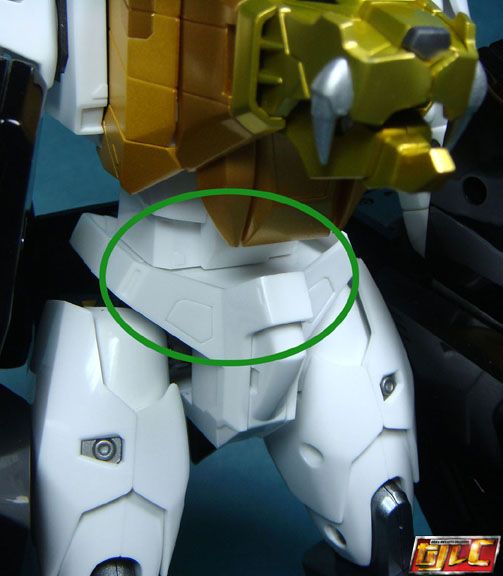 -When doing S.D. Gaigar, there’s an option to put in a support piece into the Stealth Gao to help it attach better to Gaigar.

-Display base for Stealth Gao can be modified to support the S.D. Gaigar, personally though I didn’t use it and the figure stood just fine without it, I guess this helps if we’re talking long term displays.

-When transforming into Gaogaigar, remember to extend this plate on Galeon, it helps perfect the look of GGG.

-When lowering Gaigar’s legs, remember to unlock the crotch first.

-Before attaching the Drill Gaos, make sure the shafts are aligned up right and that the runners are locked in place.

-Gaigar’s arms should be rotated properly into an angle and not just simply facing to the back.

-Take good notice of the orientation of the Linear Gao before inserting it in. There’s a right way and a wrong way, kids!

-Collapsing the panel into the cavity instead of removing it, genius!

-The oversized fist do not fit into the forearm cavities

-Release button for the Drill Gaos (I can’t help but think Bandai learned this from toying around with the CM’s version).

-Watch out for this, it’s a really cool gimmick, when you press down and lock in the helmet, the G-Stone “emerges” . . I totally geeked out when I saw it.

-To eject the forearms, just simply press into the wrist cavity with your thumb.

-When returning the covers, remember that there’s a notch there that should be aligned with the slot on the forearms.

-When disassembling Gaogaigar remember to unlock the Linear Gao by lifting Gaigar’s head to the front.

-When forming Gaogaigar, you have an option to use a support bracket for Stealth Gao. To open up Gaigar’s “sides” for plugging in the support bracket, use the tabs inside the shoulder cavity where Linear Gao goes. I almost used a screw driver to pop them open. Good thing I didn’t (Thanks Ricky ). 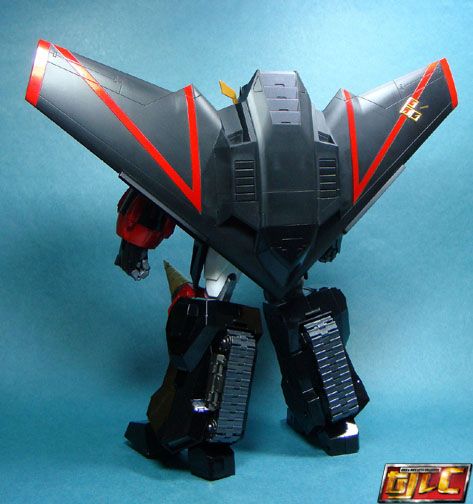 I’m really impressed with how you can clearly see Gaigar’s eyes through the GGG helmet.

Even though Gaogaigar is big, it’s surprising to know that the size is all thanks to Gaigar being big and detailed. 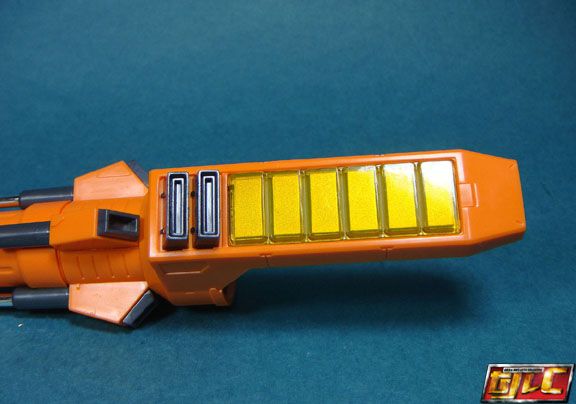 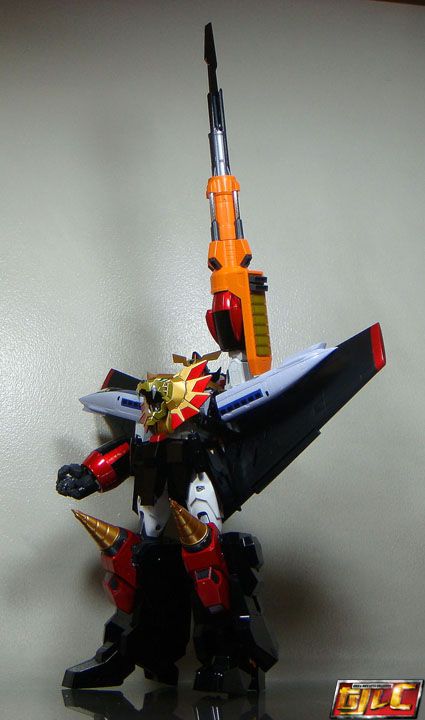 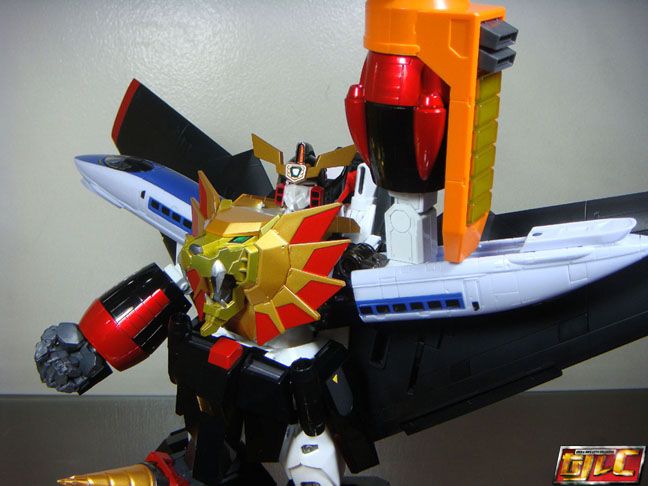 Remember to fold back parts of the chest plate.

Some fun with the super poseable fingers.

You can slap on the Space Boosters from the CM’s Corp. Brave Gokin Star Gaogaigar, but it looks a bit awkward, they should be a bit bigger.

Unfortunately, you can’t attach the Goldion Hammer from the CM’s Corp figure, the bicep on SOC GGG is too big. I think you can attach the Hammer from the original Takara or the Yujin DX Gaofighgar set. Those should fit fine since the scale is roughly the same (I forgot to take a pic of this in all the excitement.)

From my old files (for visual reference) 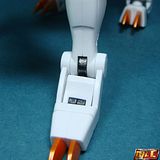 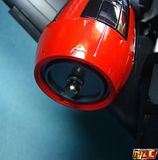 -That “spin out fist” effect when plugging in the forearms! Smart engineering!!

-The pick. Perfect for plucking out some of the panels, likewise, perfect for demonstrating the “spin out fist” effect if you can’t see it happening when combining GGG. Just slowly push in the pick where the bicep would go in and watch the fist rotate out of the cavity. .

-See through c0ckpits on all the Gao Machines!

-Great sculpting work all around, it’s like Gaogaigar walked right out of the TV screen.

The back of the styro box made me smile…

-Those super poseable hands, they’re perfect! I cannot emphasize this enough, they practically can do whatever you can expect them to do and not fall apart (didn’t have any problems with mine). It’s insane. Strange but when SOC Franky came out I was hoping Bandai would do that level of hand detail for SOC GGG and here it is. Wow…

The Bad
-I would love it if they included a mini Mamoru or Guy with this set, but alas.. maybe in the possible “upgrade” kit?

-Lack of a hinge joint on the Stealth Gao wings. I loved that feature on the SRC GGG. This would’ve made for some more dramatic action poses IMHO.

-Limited range of waist joint rotation on GGG. Actually, we can’t really do dramatic action poses like we did with the SRC, but I guess that’s the price of a transforming GGG.

-Setting up the Linear Gao to pop out the GGG biceps is a pain! I really wish there was a simpler way.

-I was hoping that the Dividing Driver would be diecast (like with the Kotobukiya Sozetsu Gokin GGG), no such luck.

-No Effects parts for the Protect Shade.

Well, that’s it, this figure is really super impressive, I can’t help but think the design team poured a lot of heart into engineering this figure. The level of detail and gimmicks to capture the look of Gaogaigar is insane (heck, Bandai even released a video on the “how to’s” for this figure).

Sure, there might be a few misses (limited waist rotation for one) but with the messy design of the Gaogaigar I can’t really blame them. They made a perfect balance of aesthetics, transformability, functionality and durability with this toy. Something I don’t think that’s ever been accomplished with any GGG toy so far. If I knew who or where to send a thank you letter to, I would totally do it.