Filed under: SOC - Soul of Chogokin, The King of Braves Gaogaigar
Share This Page

The manual is a reprint of the Gx-69 for the most part.

The tank’s barrel can be elevated.

Remember to flip out the sole panels on his feet.

Properly extend the arms to reveal the bicep swivel joint.

The default fists are small, you can swap them out for the bigger, more proportional ones.

Physically, the most durable of the GGG Mobile Corp mecha units, Goldy Marg was built to withstand almost anything. Unfortunately, this is also the same for his super AI programming, which makes Goldy’s personality incredibly stubborn and hard-headed. Still, he never fails to assist Gaogaigar to save the day when the need arises by forming the invincible Marg Hand/ Goldion Hammer unit.

I really love the new shiny metal vents on his shoulders and chest.

Due to the massive hammer on his back, make sure to use the handle as a post to help prop Goldy up.

I really wish Bandai reworked the forehead piece for Goldy, it doesn’t go quite as high as I would’ve liked (same as with the original Gx-69), you can’t really make out his eyes that clearly thanks to this.

Display base for the Marg Arm mode.

There’s also an optional piece to plug into the Marg Arm to connect to Gaogaigar more securely as well.

Be careful not to lose the mags on Goldy’s tires (for the energy “nail”). They tend to fall out quite easily,

Pressing on the center piece releases a spring mechanism that expands the hammer by a half an inch or so (same as with the original Gx-69).

Use of the alternate, more proportional hand is recommended. Both can hold the hammer but using the smaller one is more difficult as you’re supposed to align the hammer handle to a clip on the small hand’s palm to get it hold securely. There is no need for that on the bigger hand.

Depending on your choice of the stand attachments, you can choose two ways to display the arm, on its belly or on its side.

The purpose of having the arm lying on its side is so you can execute the fork move for “removing” the nail. 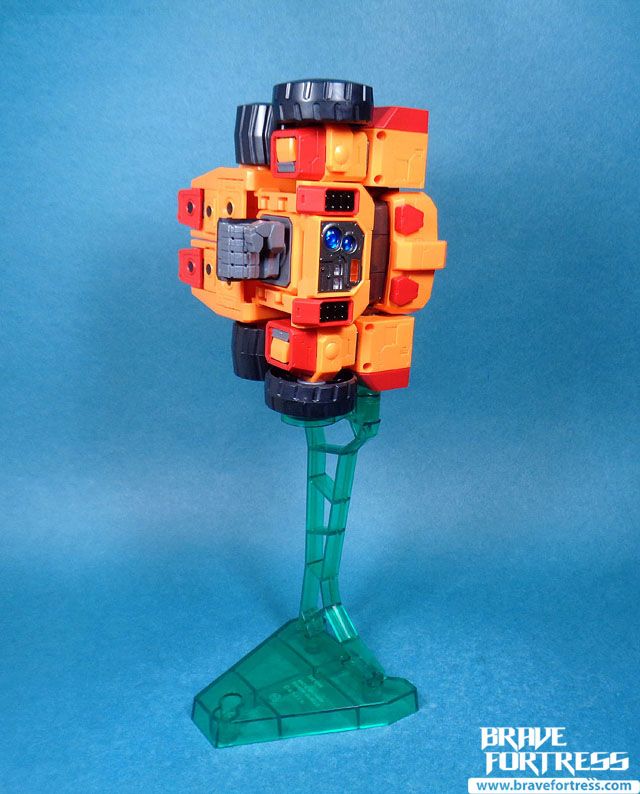 Optional attachments for the energy nail plus the Zonder core. 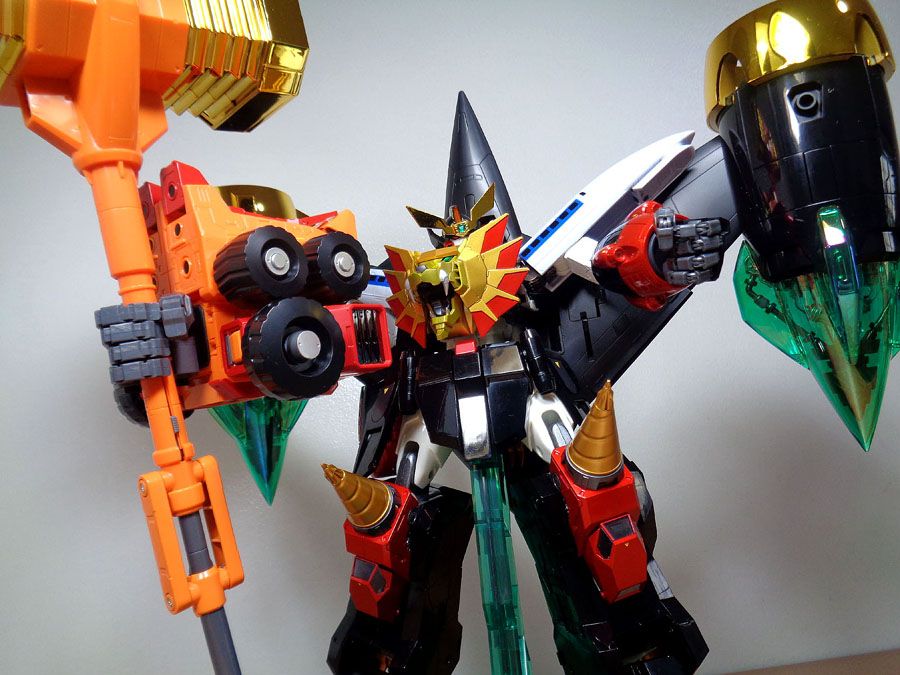 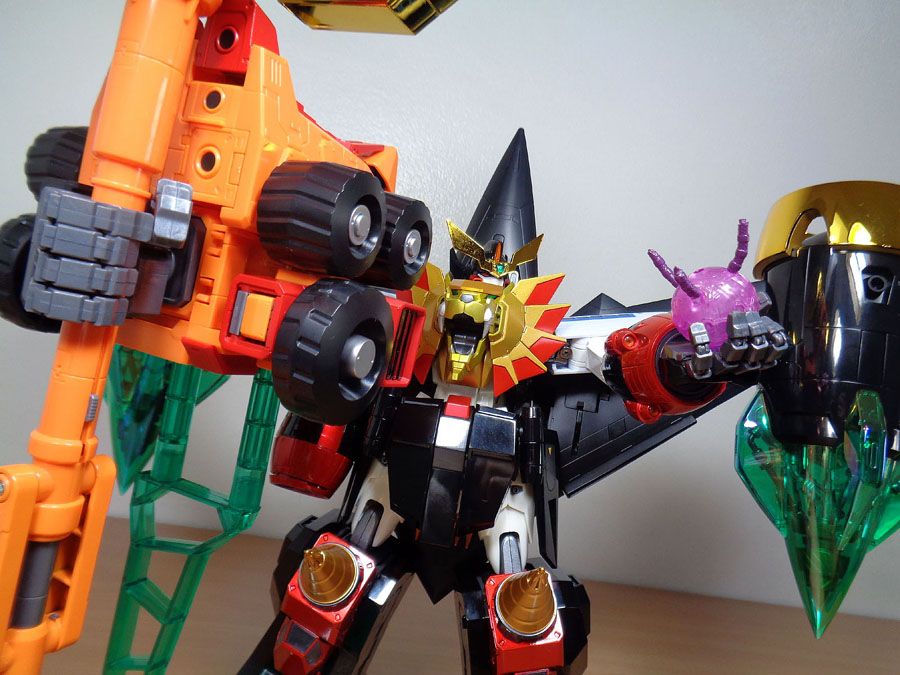 Fully assembled, it is an impressive piece, but it will eat up a lot of real estate on a display shelf. It spans roughly 16.5 x 13 inches (height and depth, I forgot to measure width).

You’re supposed to cheat a bit and lift GGG’s head off his shoulders so that you can see his face more when displayed, that’s how I did these shots. 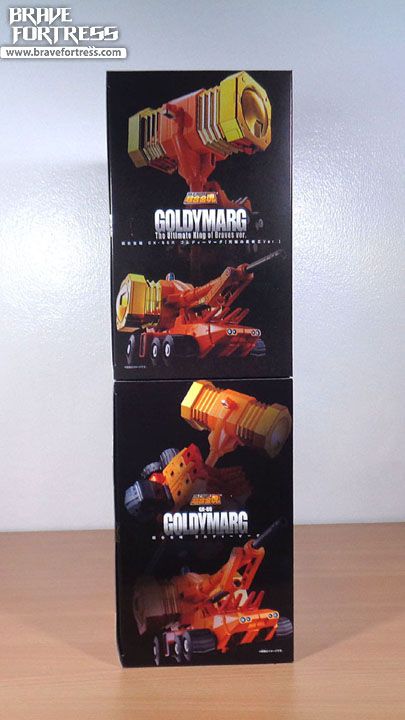 -The spring-gimmick cover panels for the wrists during transformation is clever (but can be annoying).

-The new, beautiful, shiny parts really make the figure stand out compared to the original.

-“Ultimate King of Braves” GGG really looks amazing and eye-catching on any shelf.

-Spring gimmick for expanding the hammer is still cool to see.

-Better, tighter joints on this version than the previous release.

-The optional support piece for the left arm is still included.

The Bad
-Due to the design of the transformation, this guy does NOT have a waist joint.

-No cover plates for the back of the legs in robot mode.

-Essentially a repaint of the Gx-69 Goldy Marg.

-Forehead piece still covers too much of Goldy’s brow, you can barely make out his eyes in a lot of poses.

-Mags on the tires tend to fall out way too easily.

-Unlike the original Gx-69, this set is released as a Tamashii Web/ P-Bandai Exclusive, making it a bit more pricey.

Overall, it’s a vastly aesthetically-improved release over the original, but that’s about it. No real additions or modifications made here. It looks great and I do believe the joints are tighter here than on the original Gx-69 release too.

I am, however not too crazy about the price as this carries a heavier price tag due to it being an online exclusive (same as the Star GGG parts) and that does take away the “bang for the buck” component. Nothing new has been added in terms of accessories and the toy itself does not have any new modifications other than a new shiny deco to match the reissue Star GGG parts set.

Given the choice between this and the older release and if you have neither yet and if price is not an issue, I would have to go with this one as the completed “Ultimate King of Braves” set does look incredibly good and is visually superior over the previous set in terms of shelf presence. But if you already have the previous release Star GGG and Goldy and you’re on the fence as to whether to spend a whole lot of bucks again (and them some) for this set, then no, I don’t recommend going for it.