As it usually is with the SOC line nowadays, the base contains another accessory tray inside.

The set comes with a damaged Jet Pileder, and 2 Brain Condors (for D.C. Great Mazinger).

Well, it took Bandai around dozens of Mazinger redeco releases, but they finally made one that I actually wanted since Gx-01. A battle damaged, butt-whupped Mazinger, based on his final appearance in the “Mazinger Z vs. The Great General of Darkness” film from way back in 1974.

What really impresses is that this set is very heavily retooled. I was expecting minor cosmetic changes, paint weather at least, or at the most 50% modification on parts. I was very surprised to see the final product practically was remolded from the top down. With only the neck, abs, hands, feet and joints carried over from the standard Gx-70.

Even the hips were remolded and not just simply repainted with “weathering” (See? Butt-whupped!).

I’m glad Bandai included the right arm, since in most promo shots it was often shown not to have the arm (a result of the arm getting destroyed early on in the “final” battle).

Shish kebab damage from when Mazinger was impaled on a rock wall with a trident in his “final” movie, amongst many other things they used to inflict damage on our intrepid hero.

Just like in the move, the Jet Scrander suffered heavy damage as well. 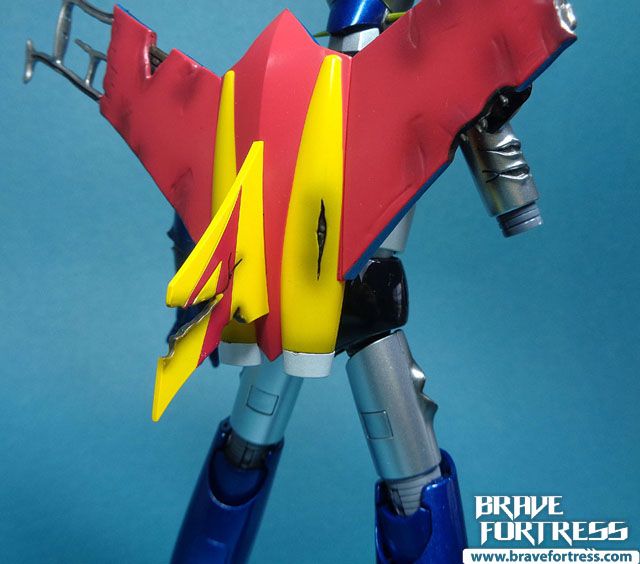 The right heat sink / chest plate is still removable. The left… uhh.. no.

With the standard Gx-70 we got optional hip plates that allowed for higher range of movement for both legs. This time around, only the left leg can be raised. To recreate the pose of Mazinger Z kneeling down.

Spoilers(? lol)
Great Mazinger shows up at the last minute out of the blue to save the day.

The Gx-70D comes with parts for Great Mazinger, too (you know, since the whole movie was all about debuting Great Mazinger). The parts here are based on how he appeared in this movie, before certain designs were “tweaked” for the TV series.

The forearm “fins” are black in the later versions, but here in his debut they were originally entirely blue.

As Mazinger Z struggles with his new opponents, Great Mazinger pretty much “one-hits” everybody and doesn’t even take damage. Makes you wonder if Tetsuya was running with cheat codes or something…. 😀

Mazinger ends the battle by skewering and landing the finishing blow on General Juuma of the Mikene (with a setup assist by Great Mazinger). Before doing a dual Breast Fire/Breast Burn finale on Juuma.

If you look closely, the display base nameplate actually has “battle damage” effects too.

Like with the standard Gx-70, the display base support arm can only plug into Mazinger’s back directly, you can’t plug into him when he has the Jet Scrander equipped, which really kinda ruins the aesthetic here as you can clearly see his “no damage” belly.

Worse, the base doesn’t come with a catapult arm for the Scrander this time, well…. it’s understandable I guess, considering there’s not much of a Scrander to put on there..

-Everything that was diecast in the standard Gx-70 is the same here, that’s major recasting and it’s impressive. Take for example the forearms. They’re still diecast despite requiring all-new molds.

-Exceptionally captures every bit of battle damage Mazinger Z got from the “Mazinger Z vs. The Great General of Darkness” movie.

-Added parts included to recreate how Great Mazinger appears in the film.

-Jet Pileder shows Koji inside. A welcome improvement over the “empty” pilot’s seat that came with the standard Gx-70, coz it would look really weird if the c0ckpit was still empty.

The Bad
-My unit came with the yellow diamond on the Jet Scrander “belt” unglued (fell off easily) I’m not sure if this is an isolated quality control issue? Easily fixed with glue though.

-Catapult for Scrander no longer included (though I can’t say I blame them, displaying the Scrander separately will reveal the non-damaged belly on Mazinger ).

No major issues here, but it does seem like this item is a bit harder to get compared to the usual exclusive? I’ve only seen a handful of these arrive locally in Manila for some reason. I guess this means it’ll be even more expensive and harder to backtrack for folks later on?


Overall, I love it. Though I may be biased since it’s something I’ve waited Bandai to make since… 1997 (geez… 21 years already), but it’s very nicely done and it captures all the great details on Mazinger as if he walked right out of the movie and into the room. I really recommend this guy if you love the Dynamic Classics SOCs. The figure’s way too iconic to pass IMHO. I just wish it was more accessible.

“You should see the other guy.”