Same as the Gx-75 release, the Pileder doesn’t directly transform, instead, an alternate unit for docking into Mazinkaiser is included.

Just as with the Gx-75 and the Dynamic Classics Mazingers SOC releases, we get optional “sleep mode” eyes included with Mazinkaiser. To change up the alternate faceplate, you have to take off the head off the ball joint first.

Secretly created by Koji’s grandfather, Juzo Kabuto, after he faked his “death” at the hands of Baron Ashura at the beginning of Mazinger Z, Mazinkaiser is the most power Mazin created by Juzo to fight against the minions of Doctor Hell. Outfitted with the new Super Alloy New Zα (Chogokin Z Alpha), Mazinkaiser’s power output and durability are increased severalfold from Mazinger Z’s original Chogokin Z Alloy.

The figure is a redeco of the Soul of Chogokin Gx-75 Mazinkaiser figure released back in 2017. This time around, the figure is given a new, shinier finish and now comes packed with an electronic display base to commemorate the 20th anniversary release of the original OVA back in 2001-2002.

Chest heat sink plates can be rotated upwards to give more clearance for the arms to pose.

Previously there were issues with the pins of the heat sink plates breaking off while still in the box for the original Gx-75 back in the day, this was supposedly mostly due to poorly designed packaging. I’m not sure if the fins have been thickened or reinforced this time around as I never tried plucking the fins off my copy of the original Gx-75 for comparison, but here’s how it looks like for this version (it came off while I was fiddling it).

While there is mid torso articulation, be mindful of the sharp sections of the upper chest when doing ab crunch poses. These can dig into the torso if you push the chest too far in.

Also be mindful of the sharp fins on the forearms, they’re really sharp! Pulling them off for the “Turbo Smasher Punch” poses can really hurt your fingers (unless you’re wearing gloves). Likewise, be sure not to flex the arms too much past 90 degrees, as this will dig the fins into the paint on the biceps and possibly chip Mazinkaiser’s biceps.

Glacial Beam! -Freeze beams fire from Mazinkaiser’s antennae. The figure’s antennae can rotate down to recreate this. But be warned, as the antennae can easily fall out while you’re rotating them.

Giganto Missile – Mazinkaiser launches a highly destructive missile from its naval area. To recreate this attack, simply remove the belly button cover to reveal the head of the missile. There’s no firing missile gimmick here, though (same as with Gx-75).

The forearms can be easily removed from the biceps by just giving it a good, hard tug. Just be mindful of the sharp points on the forearms.

Fire Blaster – Mazinkaiser’s most destructive ranged attack, melts even enemies who are close enough to the edges of the beam. This move is said to be powerful enough to burn through the Earth’s core.

Kaiser Blade/ Shoulder Slicers – Blades that can be drawn from Mazinkaiser’s shoulders.

To recreate the scene where the Slicer’s handles pop out from Kaiser’s shoulders, just remove the top cover and replace the default pieces with the longer handles.

Before plugging in the Slicer’s handles into Mazinkaiser’s fists, remember to remove the pommels of the swords first.

Be sure to note the proper orientation for the left and right Scrander wings. To distinguish the right from the left, one of the peg connections on the backpack is bigger, so if the connection won’t go in, don’t force it, try using the other wing instead (it can be hard to tell which is which unless the peg won’t go in).

Same as before, the wings can be rotated and even folded backwards thanks to the various joints in the wings.

The set comes with alternate “flight mode” wing pieces for the Scrander.

The Final Kaiser Blade is much, much larger than the Shoulder Slicers.

To recreate the scene where Mazinkaiser pulls out the Final Kaiser Blade out of his chest in the OVA, simply remove the handle from the sword and plug it into the alternate, “cratered” Z logo in Mazinkaiser’s chest.

The Mazinkaiser logo nameplate easily tabs into the base platform.

On/ off switch is located at the back of the base.

The base requires 2 AAA batteries (not included) to operate the electronic sound chip. It only features one track – the “Mazinkaiser” theme, performed by iconic Super Robot theme song vocalist Ichiro Mizuki. The theme song runs for a total time of roughly 3 minutes and 6 seconds.

I find this protrusion of the display base arm really awkward.

You can mount the Kaiser Scrander on the display base thanks to the attachment post.

To “quake-proof” Mazinkaiser, you can opt to use this attachment instead of the pincer clips and peg the base arm directly into the back of the figure. It’s much more secure than the pincer clips.

Make sure to place this attachment piece into Kaiser’s lower back first. This piece is only for Anime accuracy. I personally prefer using the actual peg from the Scrander and connect it into Mazinkaiser, it’s much more secure.

Additional images with the display base

Sadly, I couldn’t do comparison shots with the original Gx-75, since I kinda messed up my arm from a bad fall and couldn’t lift boxes for a while to dig it out from storage. I guess I’ll have to come back to this later on. For now, here’s a reference shot for comparison with this new release. 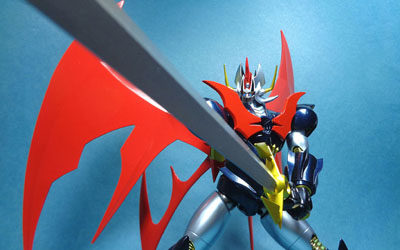 -Electronic sounds included in the display base!

-No packaging issues this time around regarding the Fire Blaster pins (as far as I know).

-The new shiny paint really makes this figure stand out more on a shelf than the previous release.

-Chromed finish on the swords! Thank you!


The Bad
-The electronic base only plays one song. No sound effects or anything else.

-Still no volume adjustment options for playing the sounds. It’s a shame Bandai never replicated how they did it with the Gx-67 Captain Harlock Arcadia (the only SOC release to feature adjustable volume for the electronics).

-Essentially a straight up redeco of Gx-75 Mazinkaiser, with no new real innovations added.

-Still no firing gimmicks anywhere on this figure.

The base color used for the shiny parts? While it may seem “black” in my photos, this is mainly because of the figure being under intense, direct light. At normal room lighting, the figure’s new paint finish makes it seem more chromed silver than actually chromed black. I think a lot of folks were not happy about this. Even I was taken aback when I first opened my copy. It does grow on you over time, but I think this would have been a more solid release had they made the parts black chrome instead of whatever this is called.

Alternately, I would’ve loved it too if they gave us chromed biceps and thighs on the original version’s colors (or shiny, yet non-chromed black) instead.


Overall, it’s not bad, but it could’ve been much better IMHO. The chromed plating just comes out wrong somehow. Given the choice between this one or the original Gx-75, I think the original still comes out on top.

On a happier note, I am glad that this time around, I don’t think there are any issues with the Fire Blaster chest pieces being broken right out of the box due to poor packaging design, at least I haven’t heard of any, unlike when the bad news spread with original Gx-75 release.

The electronic base playing the theme song is a nice touch, but I do wish they did more with it, like add weapon shouts and effects sounds. In this day and age, it shouldn’t be that hard to do, right? It’s a nice “improvement” over the Gx-75 display base but not something that would really get one to purchase the set again if you already have the Gx-75.