It’s a shame the boxes don’t stack up evenly, but I guess it is what it is. 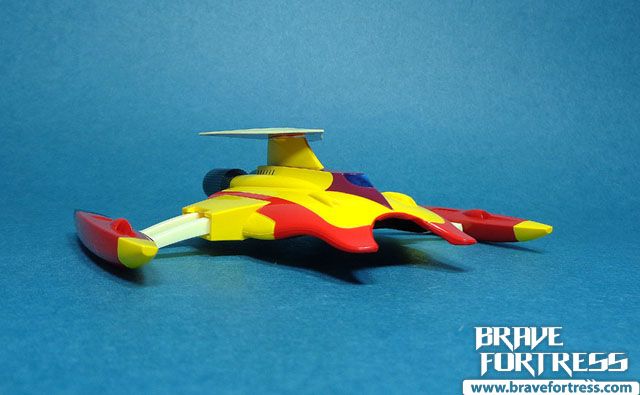 The Marine Spazers armaments include
-Marine Cutter
-Marine Missiles – can carry up to payload of 25 missiles.
-Marine Beam
-Chain Anchor – can fire 2 chains for capturing and towing opponents

Sigh… not only are the tank treads now just plastic, they don’t even roll anymore. What the??

Despite being designed for underground battles, the Drill Spazer can actually fly with a max speed of Mach 4 (same as the Double Spazer). The Drill Spazer first appeared in episode 45, originally piloted by Koji and combined for the first time in the same episode. The series intro and closing credits were changed once Maria Fleed was introduced into the show starting episode 49, now showcasing all the Spazers together in the opening credits. Maria Fleed took over as pilot for the Drill Spazer starting episode 51

The center of the Drill Spazer can split.

The set does not come with its own display platform but piggybacks on the existing Gx-76 bases, with just the addition of new display arms. The new display arms require extra add-on attachment for some reason. Why not just make the connection block already molded in by default? Is it for the TFO? Curious.

Be mindful of how you hold the new display arm attachments, as this will cause the base tops to flip open if you lift it while holding the arm.

Using the torso protector from the Double Spazer set, you can mount the Drill or Marine Spazer Grendizer on the display base.

Comparisons with the Gx-04S version. 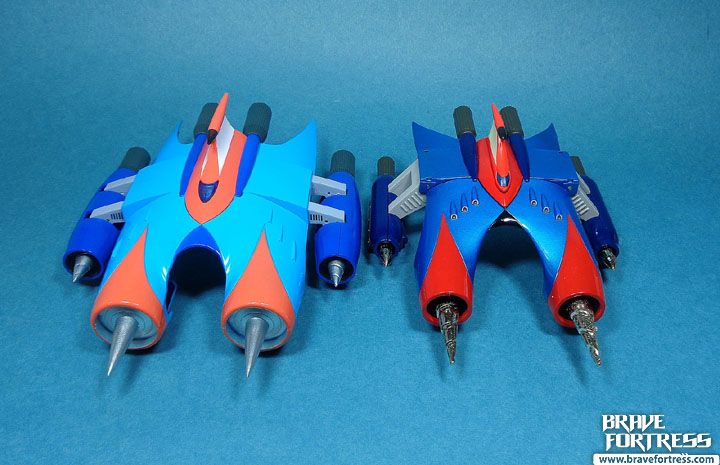 I think I prefer the old Gx-04S Spazer display layout better. The Spazer being stuck there in the back and obstructed from view seems like a poor design choice.

-Good sculpting details and is very show accurate in terms of looks, more than the original Gx-04S versions

-Drill Spazer treads do not roll.

-Grendizer’s forearms need to be removed before you can plug him into the Drill Spazer.

-No firing gimmicks but I guess we all expected that at this point.

-No display base of its own.

-Pricey due to it being a Tamashii Web Exclusive. Ouch.

Again same issues with the other Spazer set, this set is all plastic.

Overall, wow, I really hope this does not become a regular thing with the SOC line. The set again comes with Spazers that have zero diecast. Worse, the higher SRP due to it being a Website exclusive feels like highway robbery. Don’t get me started on the non rolling Drill Spazer tracks too. I gotta say I am very disappointed with this release. It could have been better but it seems like Bandai didn’t put their best foot forward here and just went for the quick cash grab. I wouldn’t mind paying more for this set as long as they at least gave us working tank treads, but it didn’t happen. Sorry, I really can’t recommend this one. If you’re on the fence with this release, skip it. Just get the first Spazer set so Grendizer has a ship and call it a day.

Heh, it just dawned on me one would wind up paying almost the same amount as a DX SOC if he gets the complete Gx-76 set. That’s just evil. 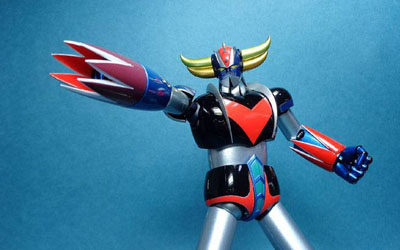 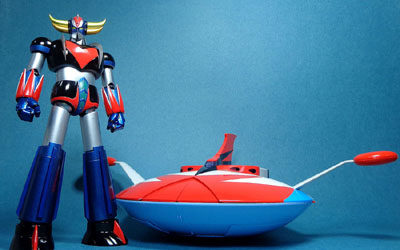