Piloted by Kappei Jin, a 12-year old boy, Kappei is a descendant of one of the families that survived the destruction of the Planet Beal. The Zambird is “co-piloted” by his dog, Chiyonishiki.

Similar to the Gx-23 Zambot 3’s Zambo Ace, the canopies for the c0ckpits open up, revealing the little pilot figures inside.

Not exactly top grade paint jobs on the pilot figures, but I guess due to their size, it’s acceptable.

The Horizontal Stabilizer for the Zambird can be replaced with a transforming version, thanks to the optional parts.

Optional cover for the bottom of the Zambird.

Similar to the Gx-23’s accessories, here, we also get weapon attachments for the Zambird.

Tremble Horn- a parabolic dish that deploys on top of the Zambird that shoots out lasers. First appears in episode 6.

50mm Vulcans- Deploys from hidden compartments behind the canopies of the Zambird. First appears in episode 1.

The alternate form of the Zambird, the Zambo Ace is the only Zambot 3 solo unit which can transform into a humanoid form.

The Zambo Ace actually features no weapons unless it has the Zambo Magnum, so it mostly relies on melee attacks to get the job done. Kappei is a trained martial artist.

The set comes with an alternate face plate for the Zambo Ace. Having a robot have “awkward facial expressions” is a running theme for Yoshiyuki Tomino I guess, he did the same thing with Daitarn 3.

In the early episodes, prior to the arrival of the other heroes, the Gun Belt which carries the Zambo Magnum was launched from the King Beal ship, which meant it had to travel some distance before it could arrive by Zambo Ace’s side. With the arrival of the other Planet Beal families starting episode 4, the Gun Belt could later be launched in the middle of the battlefield from the Zambase unit.

There’s an optional skinner faux “drum magazine” ammo clip for the belt, as the actual one is too thick to fit onto Zambo Ace’s side.

The attachment of the Gun Belt isn’t as solid as I would’ve liked (comes off a bit easily), but I guess it gets the job done. 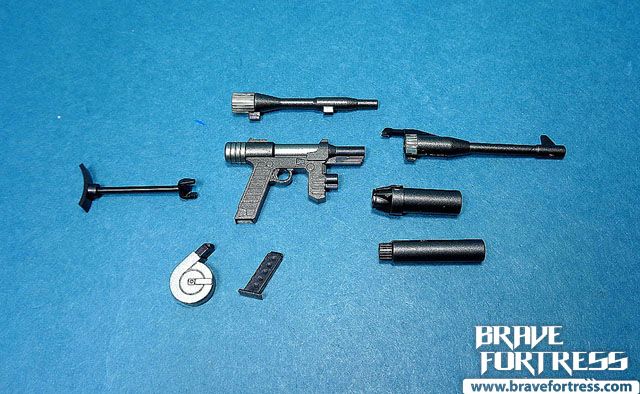 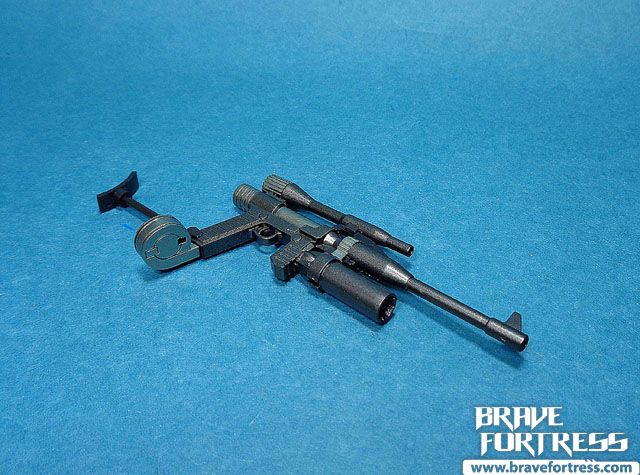 You can choose from several attachments for the Zambo Magnum, unfortunately, you can’t use them all at once (EG. you can only choose either the silencer or the long barrel, you can’t equip both).

You can choose either the standard ammo clip or the drum magazine.

Thanks to the addition of the Full Action mid-torso joint, we get a lot more cooler poses for this guy.

The Zambo Magnum also has a grenade launcher attachment, you can either plug it into the port below the barrel or you can plug it directly into the barrel itself.

Lastly, the Zambo Magnum also has a silencer attachment option, for some reason I cannot fathom. A giant robot the size of a building carrying a huge gun doesn’t exactly spell subtle….

The pilot seats flip up to hide the pilots in Zambo Ace mode.

Optional hip plates are included for the Zambo Ace. 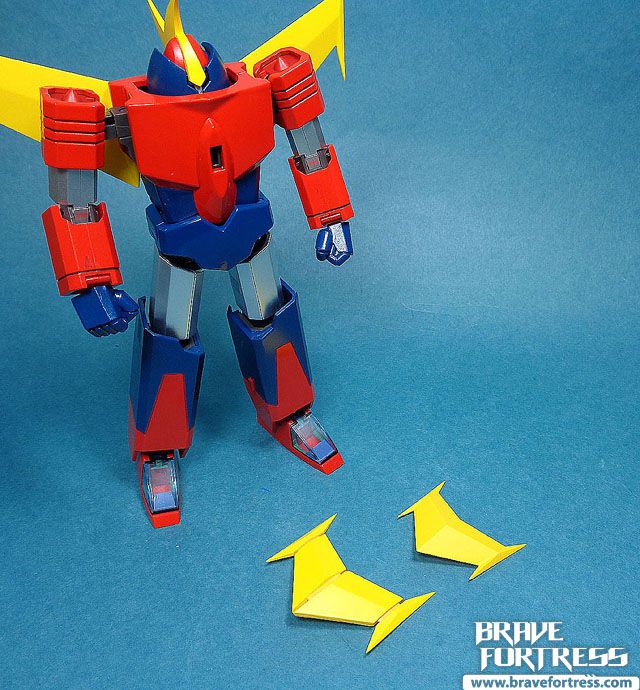 Make sure to pull the head all the way out, so that the “collar” collapses properly around the neck of the figure.

Likewise, make sure to pull out the shoulders all the way, as this will block the “collar” from going all the way down if the shoulder joints are not fully deployed.

The wrong way – (before I figured out the shoulder joints were blocking the collar).

The right way- shoulder joints are fully pulled out, not blocking the “collar” from going all the way down.

An optional “block” is included to “hold” the neck of the display mount for better stability for displaying the Zambird mode.

Removing the “block” will give wider mobility to the mount to allow better poses for the Zambo Ace mode. 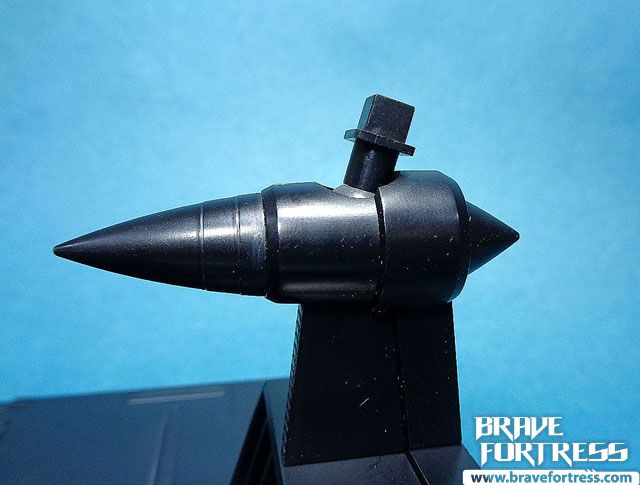 The display base is actually designed after the top section of the Zambot 3 mothership, the King Beal. 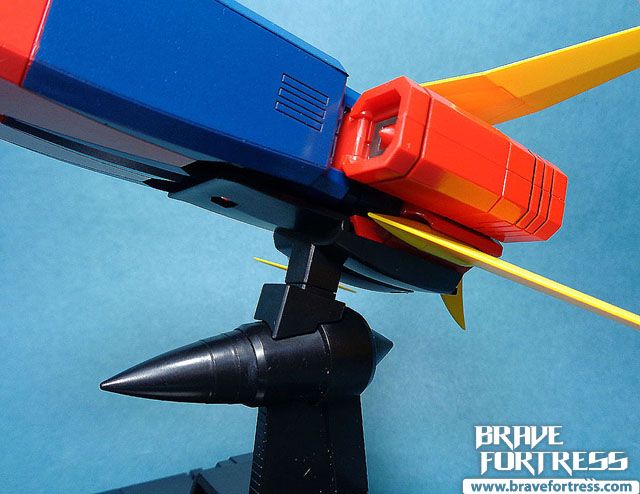 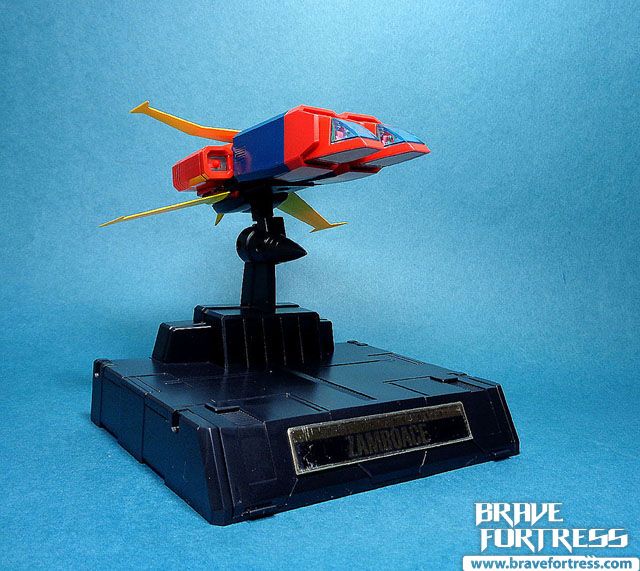 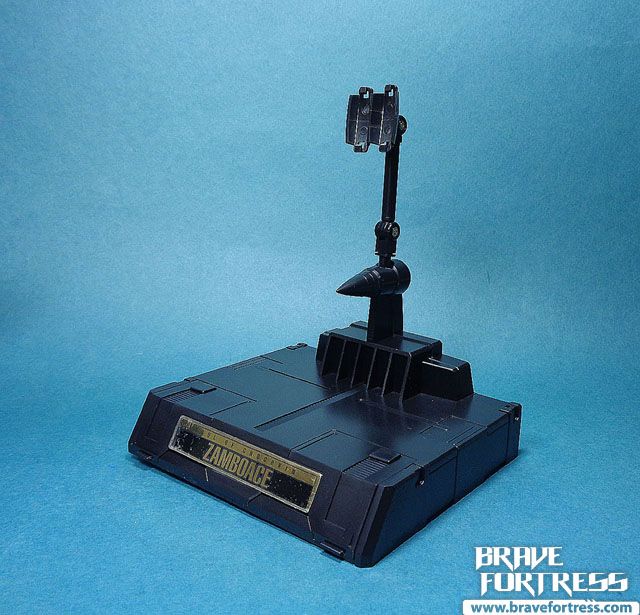 Thanks to the redesigned arm for the display base, we can get more dynamic poses out of this figure.

Comparison with the Gx-23 Zambo Ace and Zambot 3 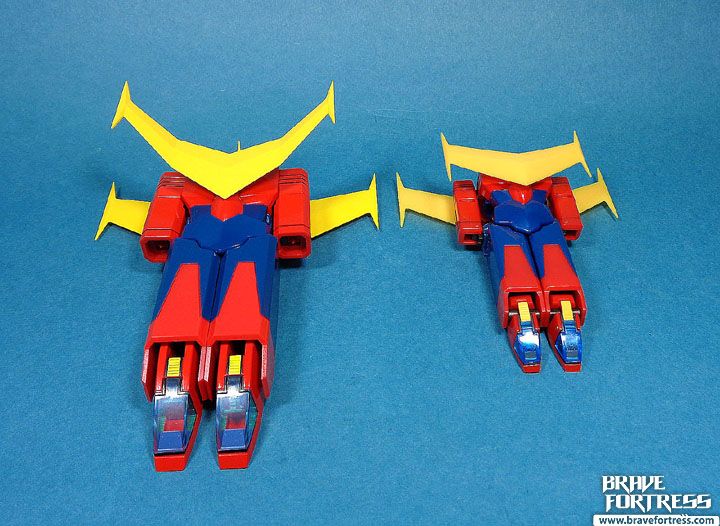 The Good
-Zambo Ace weighs 240 Grams and stands roughly 7 inches tall. Original Zambo Ace from Gx-23 was only 77 Grams and Zambot 3 was 755 Grams.

-Awesome redesign on the display base mounts. I really love how the “DISPLAY BASE” is actually more functional now compared to how it was done with the SOC FA and Dynamic Classics figures.

-Great articulation, fun to pose! Thanks to the incorporation of the Full Action joints.

-No real issues with transformation.

-Attachment of the Gun Belt isn’t quite perfect. Comes off a bit too easily from Zambo Ace.

-Paint apps on the pilot figs were a bit messy on my unit.

-Be mindful of the gun stock on the Magnum parts, it can come apart and can easily get lost.

-Lack of diecast in the lower legs is kind of a let down.

Strike 1: Paint transfer on the fist.. What the..?

Strike 2: Slightly Mis-aligned paint on my Zambo Ace’s alternate face’s right eye (you can make out the outline of where the eye sculpt is supposed to end, the paint went too far).

Ok, seriously, if Bandai’s going all “we’re slapping Tamashii Nations Quality” on their newer stuff, they need to do a better job of actually ensuring the “quality” part qualifies. Not cool. lol… I encountered less quality control issues BEFORE they started bragging about their “quality”. Talk about ironic.

Overall, despite the paint issues (hopefully it’s just localized to my unit), the figure is well built. I love they used the FA joint system on this guy and made it loads of fun to pose. It looks great, fun to handle and feels solid. I recommend this figure, it’s a definite step up from the previous Gx-23A Zambo Ace release.

On a side note, there was some rumor that Bandai was planning on releasing the other two Zambot 3 machines (Zambull and Zambase), but it all hinged on whether the Zambo Ace sold well or not. I think it didn’t happen, sad to say, at least not in the numbers Bandai wanted it to be to justify spending the bucks into R&D into making the other units.

Plus, to get the Gx-81 Zambo Ace to be able to combine with the others would require this unit to come with already have the Zambot 3 head included inside its torso from the get go (unless they planned to cheat the design process and just release a swappable head for the Zambo Ace to Zambot 3 with one of the other units). But that’s not the case. It’s a real shame though. Given this size and scale for Zambo Ace, a fully combined Zambot 3 would more or less be in the DX scale. Ahh… perhaps one day.

Funfact: The Zambot 3 series was written and directed by Yoshiyuki Tomino, aka the father of Gundam. In creating the original Gundam series, he was responsible for shifting the “Super Robot” genre into “Real Robot” genre, which focused more on the realistic approach to giant robots and featured grounded main characters and stories. He also wrote and directed Space Runaway Ideon, Invincible Steel Man Daitarn 3. Tomino is often nicknamed “Kill ‘Em All Tomino” due to the high number of character deaths in his works, starting with Zambot 3.

Funfact 2: Yoshiyuki Tomino also directed the first 26 episodes (out of 50) of 1975’s Brave Raideen and was later a producer on Voltes 5. 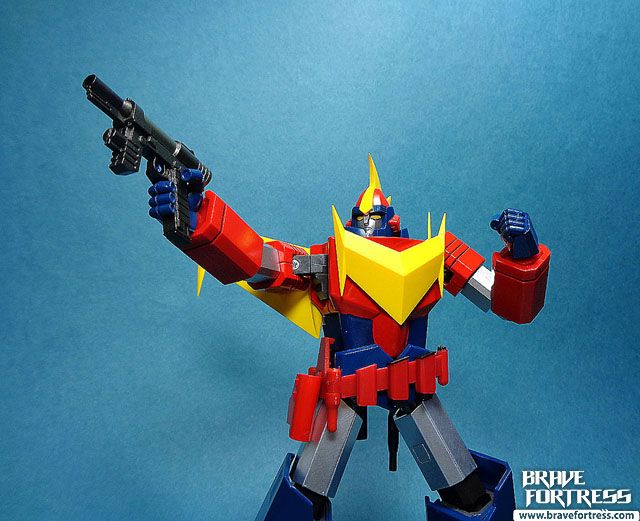