Soul of Chogokin Gx-86 Space Battleship Yamato 2202. Apologies in advance for the thumbnails, but Photobucket is having issues apparently. The links work fine though, so clicking on the non-loading images will still take you to the full-sized image.

Interesting they decided to put on the Starblazers title on the package, it seems like an afterthought though.

Remote control is stored under the Yamato in the styrofoam.

Hmm.. I guess in an effort to save space, they just tossed most of the stuff into baggies? Not really elegant to look at.

Set 3 years after the events of Space Battleship Yamato 2199, the Yamato sets sail again on another voyage. This time, the crew sets off to confront a new threat in deep space, the Gatlantis Empire.

Stabilizer wings. These are attached along with the adjustable display base arms, so you can make it look like the Yamato is doing evasive maneuvers.

Ships – A total of 9 ships are included in this set.

By comparison, the 2199 version only had 6 ships. Featuring only 4 Cosmo Falcons and 2 Cosmo Zeroes.

To prevent the stubs from falling out all over the place, I recommend cutting just one corner of the baggie, instead of the whole top off.

Be careful when plugging the Cosmo Zero I Prototype, the base fin of the plane is quite thin. 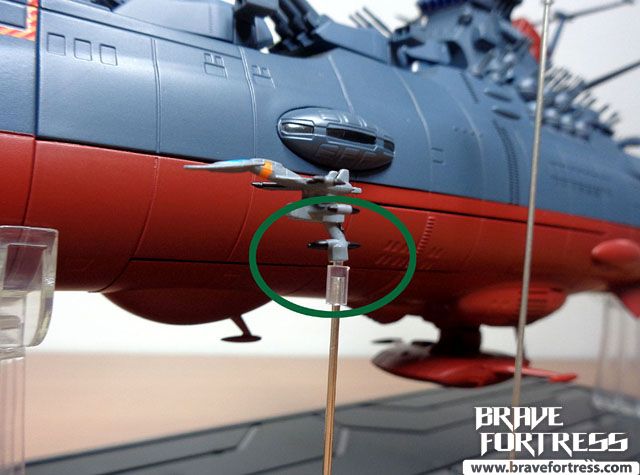 There are 12 slots on the base to display the planes (there are only 9 planes in total), but using the cross or tri adapter, you can plug in multiple ships onto one post, to display all the ships on one side.

Sheesh!! When you first open up the packet that has the Rocket Anchor parts, this is what will greet you. A big, tangled mess.

Now, the good news is that this isn’t the Gordian Knot, so it can be untangled but you have to use pointy tools to get the job done, otherwise, going by hand will be harder, using small screw drivers or toothpicks will do. But still, this should’ve even been an issue. Seriously, not impressing me with “Tamashii Nations Quality” here (yet again) Bandai Blue Team. Get it together!

Once that’s all sorted out (shouldn’t take long with picks) this looks much better. 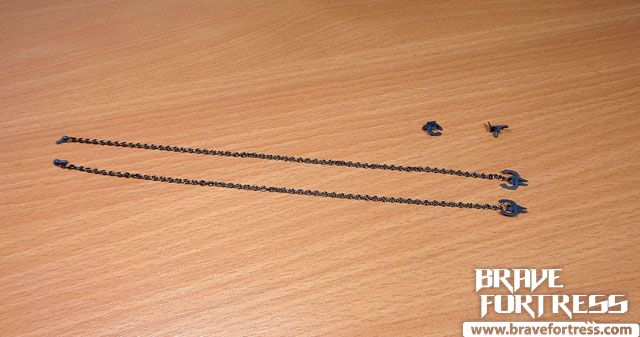 In the 2199 SOC Yamato, the Hangar Bay had an optional “side panel” for you to open and appreciate the details inside, this feature has been removed here.

Likewise, back in the Soul of Popynica Yamato, the Hangar even had an LED inside so you could see. That would’ve been cool to see here.

SAM (Surface to Air Missiles). While only mentioned in passing in the manual, there’s actually a switch on the side to raise the missiles up.

Anti-aircraft Pulse Lasers, sadly there’s no way to make these move. Back in the “Classic” Gx-57 Yamato, there was a dial that you could use to rotate the Pulse Laser turrets.

The main switch on the Yamato is here, but to get to it, you have to remove the small plastic cap, turn it on and return the cap again.

*Note that the radar actually has 16 different dialogue sets, just push the button 16 times to toggle through the various sets.

When you turn on the main switch on the Yamato, the bridge lights up, along with the “bridge systems activating” sound effect.

Wave Motion Engine cycles through various intensities while powering up when you hit the “on” switch on the remote, there will be an audio clip from the Japanese voice actors that will play out.

The remote works only within these ranges.

The IR receiver is actually the window for the ship’s Mess hall / galley I think?

Shock Cannons, as part of the new gimmicks for the toy, the Shock Cannons are now remote controlled and can be turned via the IR remote. You still have to manually adjust the height of each of the cannon barrels, though.

When first activated on the remote, the whole Yamato powers down (just like in the Anime), the lights go off on the bridge and then the Gun powers up before becoming even brighter. It’s a sight to see.

When left idle for 5 minutes, there will be an audio playback featuring Yuki Mori saying something along the lines of “Yamato powering down” and then the Yamato will go into sleep mode. To reactivate the electronics, you will again have to pop open the small switch cover and toggle the switch.

Changes from the Gx-64 Yamato 2199
-Bridge light is now blue instead of green
-Stabilizer wings are now red instead of gray
-Side access hatch for the hangar bay has now been removed
-Louder and clearer audio on the 2202
-Number of “ships” have been expanded from 6 to 9 (only 6 ships on the Gx-64).
-Darker paint finish for the 2202 plus some added paint details on the sides of the ship
-Rotating Shock Cannons via dial on the starboard side has been replaced by the remote control type, giving a cleaner look for the starboard side.
-Audio tracks now included recorded voice and dialogues, not just sound effects (previous versions only had sound effects and music).

Sad to say, I didn’t have time to dig out the 2199 to do a comparison. I’ll try to do it if I have some free time again later on.

With the S.H. Figuarts Yuki Mori.

-New electronics are the main selling point here and oh, boy, does it deliver!

-Audio is good and clear, despite having no adjustable volume.

-The new remote gimmick on the Shock Cannons! That is sooo cool!

-Ports for the stabilizer wings have spring covers, so they close up nicely when you pull out the wings.

-Removing the cap for turning on the Yamato again after it shuts down is a big hassle. I wish there was an easier way.

-I didn’t have the time to do a side-by-side comparison, but it does seem like some parts were reused from the Gx-63? If so, then that would mean this release is basically a retool of sorts.

-It’s dark inside the hangar, I wish it had some sort of lighting.

-Volume for the audio is not adjustable (same as the other Yamatos, but it was adjustable on the Harlock Arcadia)

Nothing really to complain about, the toy is pretty good, the paints are nicely done and there are no major quality control issues with this release as far as I know.

Overall, it’s a great release. The remote control is such a fun thing to toy around with (my son couldn’t get enough of it). Plus the new audio recordings that include the voice over dialogues add a whole new level of wow to the electronics.

I guess the only downside at this point would be what to do with the Gx-64 2199 Yamato, since it seems inferior to this release now. The Gx-64 will become even more obsolete once the Gx-89 Garmillas Warship gets released, as it is mentioned that the Gx-89 will also interact with the Gx-86 Yamato’s electronics somehow. So given the choice, I guess the Gx-86 Space Battleship Yamato is the one to keep. 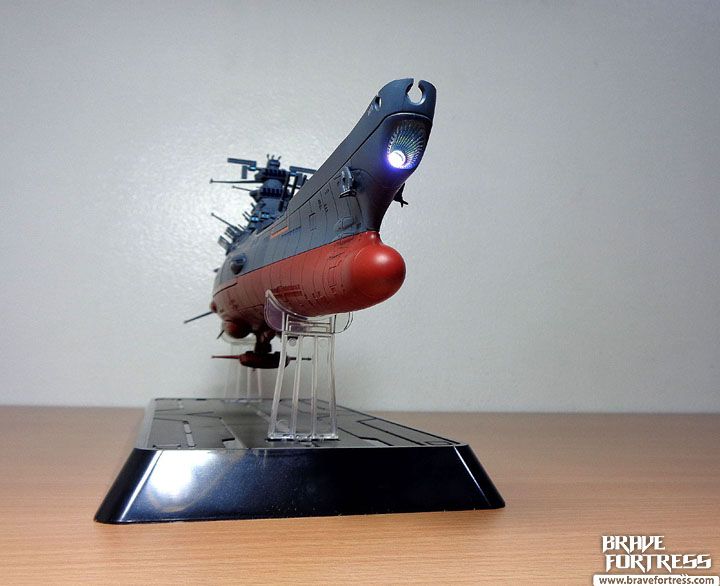