Filed under: SOC - Soul of Chogokin, Voltron -Defender of the Universe
Share This Page

The English outer box sleeve can be lifted to reveal the main inner Japanese text box.

A plastic cover for the trays.

Alternate chopper blades for Ruggers 3 and 4.

While the teams are in their combined fighter modes, they have the ability to perform limited warp jumps as long as the three ships are lined in formation.

Formed by combining all 15 vehicles, Dairugger is the main defensive unit of the Rugger Guard exploration ship as it explores the deep reaches of space to map out the stars. The crew soon encounter the Galveston race who are bent on conquest and finding a new home for their people. The series ran for 56 episodes back in 1982 to1983, and was later aired as part of the Voltron series in 1985.

For better show accuracy, it’s best to remove the propellers on Ruggers 3 and 4.

Dairugger has two ridiculously powerful (dare I say, overkill) attacks, namely “Dairugger Powerful Attack (later called Dairugger Miracle Power)” and “Dairugger Typhoon”. These can literally obliterate fleets in seconds. Why they don’t just spam this left and right in every fight is beyond me.

The Shot Arrow is on a flexible wire, so you can change the position of the accessory how you wish.

In the series, more often than not, the Shot Arrows are deployed as throwing darts, ejected from the sides of Dairugger’s shins.

Utilizing a hidden swing joint on the shoulders, you can make Dairugger hold the sword with two hands.

Similar with the Soul of Chogokin Gx-71 Golion Voltron, The name plate can be swapped with either “Dairugger XV” or “Voltron”.

Fists are stored underneath the base.

To remove Rugger 5, lift from the thruster side of the figure.

The attachments for Rugger 5 involves clips, I really hope these won’t wear down over time. Worse, Since it’s red on white plastic, I hope the red doesn’t stain the white plastic over time as well.

Plugging in the antennae on Rugger 9 and 10 is insanely annoying, since you have to pull up the platforms after, there is no way to do this without using a pair of tweezers, which is not included in this set.

Remember to flip out these tiny wings on Rugger 6 for show accuracy.

Watch out for this double hinge on Ruggers 9 and 10 when you transform.

To push out the fronts of Ruggers 7 and 8, push in the metal block first (marked green) into the slot (marked red), this will loosen up the front of the vehicle so you can pull it back out.

To eject Rugger 1, just press on the red chest button.

To combine Dairugger’s thighs, make sure the connection is pushed ALL THE WAY in, like in the image, otherwise, Dairugger will topple over.

Make sure to fold out the ankle joints properly, to get a wider range of motion, like so.

The back of Dairugger’s head can be removed and replaced with the spare panel for show accuracy.

Make sure to have the wheels on the forearm units folded.

To release the torso from the waist unit, push this button.

There is a hidden ab crunch joint, but you have to fold it out first to use it.

Remember to push the tires in and lock them in place after you combine the legs. This will also lock in the ankle connections for leg and feet Ruggers.

When posing the legs, make sure to lift the skirt plates in this order, otherwise, you run the risk of popping off the skirt plates, which are on a ball joint. Getting them back in isn’t easy so it’s best to avoid popping them off in the first place.

Box comparison for the English and Japanese prints.

Sigh… it seems that the paint quality is not so good on my Miracle Productions Voltron, I’ve started having paint bubbles appearing on my unit. Tsk… 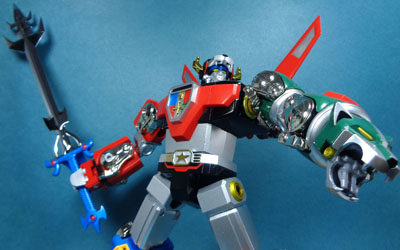 Soul of Chogokin GX-71 Golion (Voltron Defender of the Universe) 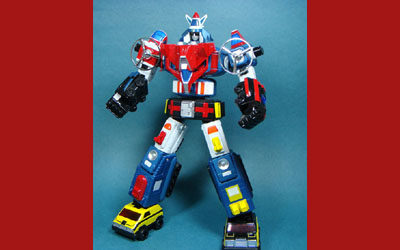 Diecast parts include:
–Every unit has diecast parts with the exception of Rugger 1(the head) and 12 and 13 (the forearms).

-Manual is in full color!

-I think this release has the THICKEST manual ever included in the entire SOC line, thanks mostly to all the little details for the transformation of each unit. A whooping 32 pages! Basically as thick as a standard comic book.

-Optional adapters are included for the Spin Cutters to attach to any Stage Act display base.

-Excellent ankle joint tightness and balance on the combined figure, making it almost impossible to accidentally tip over.

The Bad
-I’m glad Bandai went back to using their old style box (as compared to the Getter Emperor box) but for some reason, I find the box to be a fingerprint magnet. Maybe it’s all the black areas? But You can easily spot smudges on the box this time.

-No locking tabs for the tray insert? This was a nicely done idea for the Getter Emperor tray layout.

-While the treads on Rugger 2 are rubber, they do not roll.

-Getting the Ray Beam whip handle into Dairugger’s hands is a chore, you have to force the handle into the hand. Not something I’m comfortable with.

-Lack of a locking mechanism on the feet wheels. While the toy isn’t prone to falling over, there is some issue with the feet wheels still being able to roll.

No real quality control issues this time around, thankfully. I was honestly expecting some hiccup considering the number of individual units are in this set.

Overall, it is an amazing set! Bandai really knocked this one out of the park! The paint and details are superb and it shows on the overall finish, especially when you pose it next to Golion (they match up) and the Miracle Productions version (aesthetically, the SOC wins by a mile). I will eventually pose the Miracle version next to the Toynami Lion Voltron down the road.

The negatives here for me would be the difficulty of equipping the Ray Beam Whip (have to force the handle into the hand) and the lack of a locking mechanism for the feet wheels. They’re not real deal breakers though, just unexpected.

The biggest issue I suppose for folks would be the price. It costs a lot right out the gate compared to other SOC combiners, due to the rights or because of the multiple number of parts? I can’t say. But I do feel that this beautiful set is worth the actual SRP, just not at the inflated prices on the secondary markets.

Funfacts
-Apparently, “Dairugger means youth”, if the Japanese theme song is to be believed. lol….

-If any of the 15 pilots get incapacitated, all they have to do is just switch on the autopilot and the team can still form Dairugger.

-Dairugger was named after the sport, rugby, it somewhat explains why there are 15 components to Dairugger, as rugby requires 15 players per team.

-There is no “only 5 minutes of Nuclear Operating Power” time limit in the original Japanese version unlike in the US version.

-Throughout the course of the series, logistical support from Earth kept getting blown up almost every time, it’s close to becoming a running joke.

-Considering how many c0ckpit canopies that are readily exposed all over Dairugger’s surface, and how often Dairugger gets shot at by entire fleets of enemies, it’s a miracle that none of the pilots ever get killed or blown up.

-Dairugger can still be combined, even if he’s missing Rugger 1 (The head), with Sea Team’s Keats in control instead of Aki. Unfortunately, it will have all the combat capability of a targeting dummy.

-In the series, even when combined, Dairugger can still be disconnected if a powerful shot hits them directly.

-For the unfamiliar, Golion and Dairugger XV are actually different series. They only came together due to World Events Productions getting the rights to repackage the shows into the Voltron. Due to the popularity of the franchise, WEP even commissioned Toei Productions to make the one-shot, direct-to-home-video Fleet of Doom movie showcasing the two teams working together.