It’s a bit easy to miss, but make sure you securely “lock” the ship into place on the display base, meaning all four(!) hardpoints have to be clipped perfectly onto the base. This will prevent it from falling off in case you hit the table or shelf. It’s plastic on plastic contact so don’t worry about paint chipping here.

The complete official designation for this warship is the “Destoria Class Astro Heavy Cruiser”. This unit is a second class armored vessel and serves as the backbone of the Imperial Astro Fleet. Thanks to its thick armor, beam attacks from most of Earth’s fleet cannot penetrate its defenses. Only the cannons and torpedoes on the Yamato are powerful enough to breach through. It is the equivalent of the Earth Fleet’s Battleship Class in terms of size.

The Destoria Class’ cruise speed may also possibly be faster than the Yamato, as it was able to catch up to latter in the episode “One Man’s War (episode 23)”.

The triple 330 mm positron beam turrets on the ship can be (manually) rotated.

The set runs on 2x AAA batteries. Batteries NOT included.

To activate the electronics, first position which side you want the setting to be on. The one stud is for the Garmillas ship itself, while the two stud setting is for when it will interact with the Gx-86 Yamato. Leaving it in the center “neutral” posiition sets it to the “off” setting.

Pressing on the exhaust vents will activate the electronics. 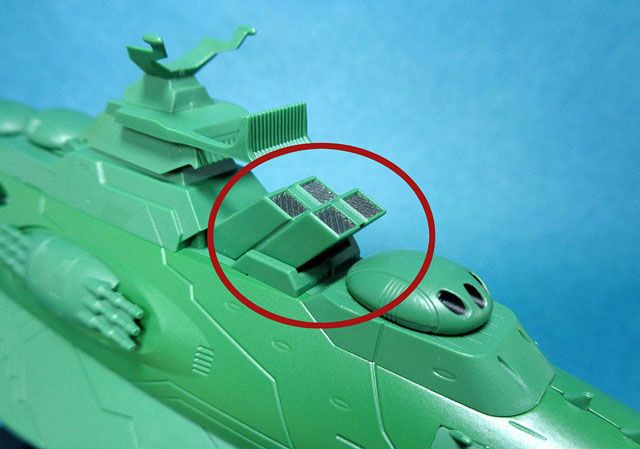 Holding down the vent button:
-Will activate “shutdown” sounds and the lights and engine sound on the toy will deactivate, signifying the Yamato has knocked out this vessel.

The bow of the ship changes color, from green to yellow to dark orange (red?).

With the Gx-86 Space Battleship Yamato

Seriously, it feels like the Yamato is bullying the poor little Garmillas “Warship” at this point. You just gotta feel sorry for the bad guys…

The infra red sensors for the Garmillas Warship are located here. This is for interacting with the Gx-86’s remote control. So this must be facing the remote. I’m not entirely sure, but I think the opposite side of the ship can also receive IR signals. I’ll have to recheck this again later on.

Remember, to make the interaction work, you have to place the switch on the Garmillas Warship on the “two studs” setting.

This is how you align everything, according to the manual.

1. Once you’re ready (the Yamato is already “on”), press the vent button on the Garmillas Warship and it should activate the warp out effects.

2. This in turn will trigger the Yamato to go on alert mode, activating radar sensor sounds and speaking lines from Yuki Mori, the ship’s radar operator.

3. Pressing the any weapon buttons on the Yamato’s remote will activate firing sounds from the Yamato.

5. You can keep pressing all the weapon buttons on the Yamato and each time, it will register as a hit on the Garmillas Warship.

7. Pressing the duct button again on the Garmillas Warship will reactivate everything and we start back at step 1.

8. Alternately, instead of doing step 3, you can also opt to just end the Garmillas right away and just hit the Yamato Wave Motion Gun button to obliterate the poor fools! Moral ethics be damned! Doing so will instantly take you to step 6 (destroyed warship).


Lastly, the electronics on the Garmillas Warship will shut off after 3 minutes of being idle.


The Bad
-Only interacts with the Gx-86 Yamato, does NOT interact with the Gx-64, Gx-57 or the Soul of Popynica Yamatoes.

-I wish it came with some Garmillas fighters to make it look more impressive.


The Ugly
No quality control problems here. It would be really sad if this thing had any QC issues since it hardly comes with anything and doesn’t have any real moving parts.

Overall, a decent release. It’s primary function really is to be just an added accessory for the Yamato. Although it doesn’t really come with much, the interaction gimmick for it with the Yamato is awesome and well worth it! I recommend getting this just so your Yamato can have something to kick the crap out of.


On a side note, as expected, since villains generally do not sell well, this unit was marked down eventually at retailers. With help from a friend based in Hong Kong (thanks Chester!), I was able to get two more Garmillas ships at deep discount to help their present buddy gang up on the Yamato when I (hopefully) one day have a proper place to display them.

Unfortunately, thanks to all the mess the Covid-19 pandemic is causing, it will be a while before I can get the extra ships in hand (they didn’t make it in time for this photoshoot). I guess I’ll have to revisit this post later on and do a proper group shot.

Parting shot – Remember, folks, the Yamato’s battery cover is screwed in for one of the sections, I almost forgot about this and was trying to remove the cover by force. Yikes. Good thing there were no stress marks after. I’m getting old. lol…