Before displaying this figure, make sure his head fin is propped up. This thing tends to collapse down in package if you don’t prop it up right.

Piloted by Alan Igor, son of General Ross Igor, the Blackwing was a late addition to the Bestial Fighter Troop/ Cyber Beast Force (Jyusenki Tai) and Igor would often be at odds with Shinobu Fujiwara, the Dancougar team leader and pilot of the Eagle Fighter.

The Blackwing has a lot of built-in machine guns, beam cannons and missile ports in the Anime, even in it’s shoulders, but it does not have a external weaponry or armament. To remedy this with the toy, you can borrow the guns that came with the Gx-13R set intended for the Cougar and Liger.

Do note that the wings can be swing backwards thanks to a ratcheted hinge system, for added clearance for the shoulders to pose.

I gotta say, I am loving the way Bandai used diecast around all the main joints on this thing, even in the wing joints, plus diecast in the feet. It’s crazy! I was half-expecting this guy to be a lightweight since he does form a backpack of sorts for Dancougar.

The base features a new push-button locking arm mechanism to ensure the whole thing supports the heavy figure properly.

The base features optional nameplates, depending on which figure you want to display. More impressively, it seems that the nameplates are diecast??

Getting the Blackwing to lock snuggly into the attachment piece can be a bit tricky at first. You just have to wiggle it in until you feel a locking snap to make sure it’s secure. Don’t worry about paint chipping, it’s not an issue here since it’s plastic on plastic contact friction.

Beast mode
You need to reposition the display base arm before you can place the Blackwing in beast mode onto it.

Note that you will also need to use the alternate attachment piece that has the moving hinge on it.

When transforming the head into the chest, take extra caution, as the clearances are very tight. 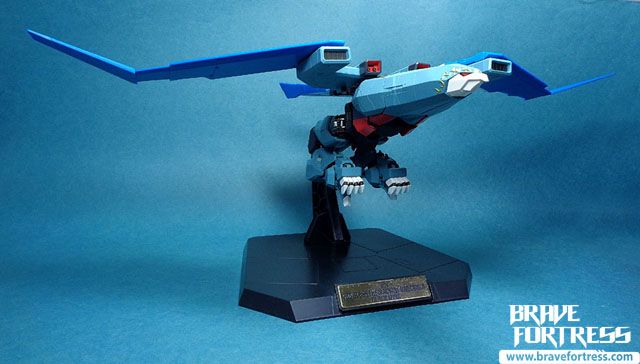 Getting these panels to close up without any gaps is a hard task. Good luck. 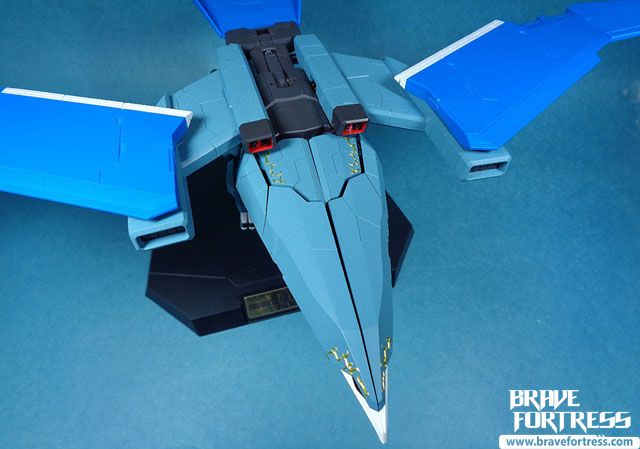 Comparison with the other Jyusenki Tai

OK, seriously, this scale was not how it looked in the Anime. I guess there’s some sort of mass shifting going on with the Eagle Fighter during the Dancougar combination? lol… I really feel bad for Shinobu. I can see why Sentinel decided to release a “big scale” Eagle Fighter, so it can go along better with their Black Wing in robot mode.

There’s an option in the display base to plug in the Eagle Fighter so it flies as a wingman to the Blackwing in their respective beast modes.

Sadly though, the Eagle Fighter is so small next to it, you hardly notice it’s there. Lol.. poor Shinobu… 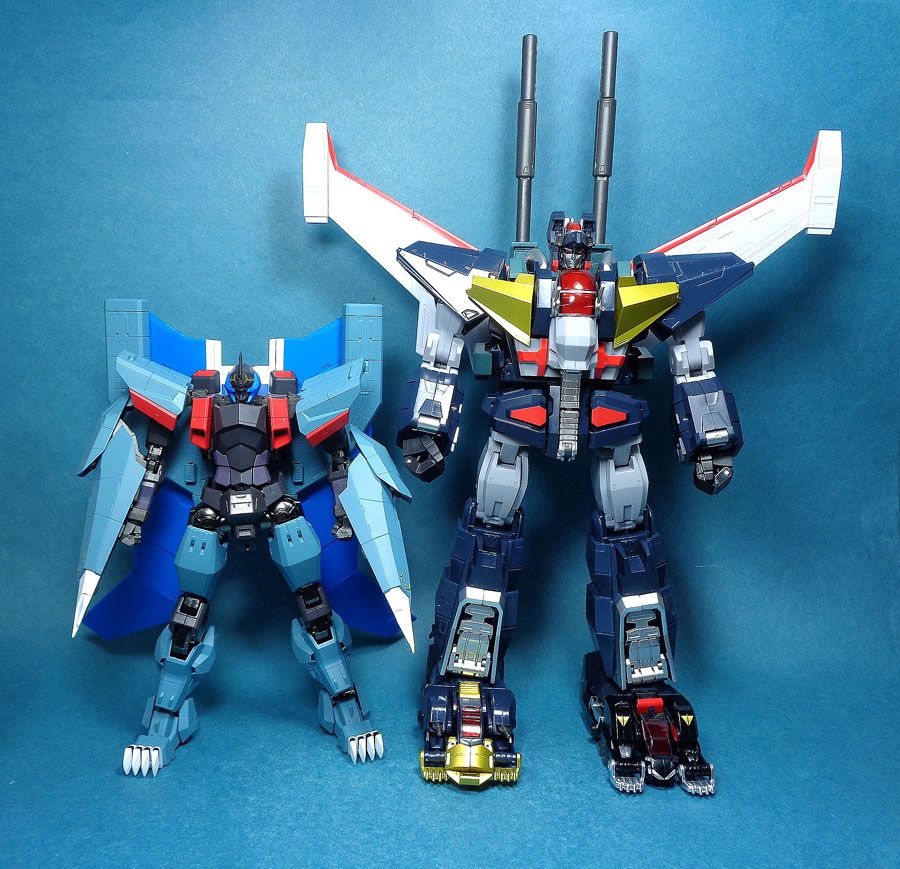 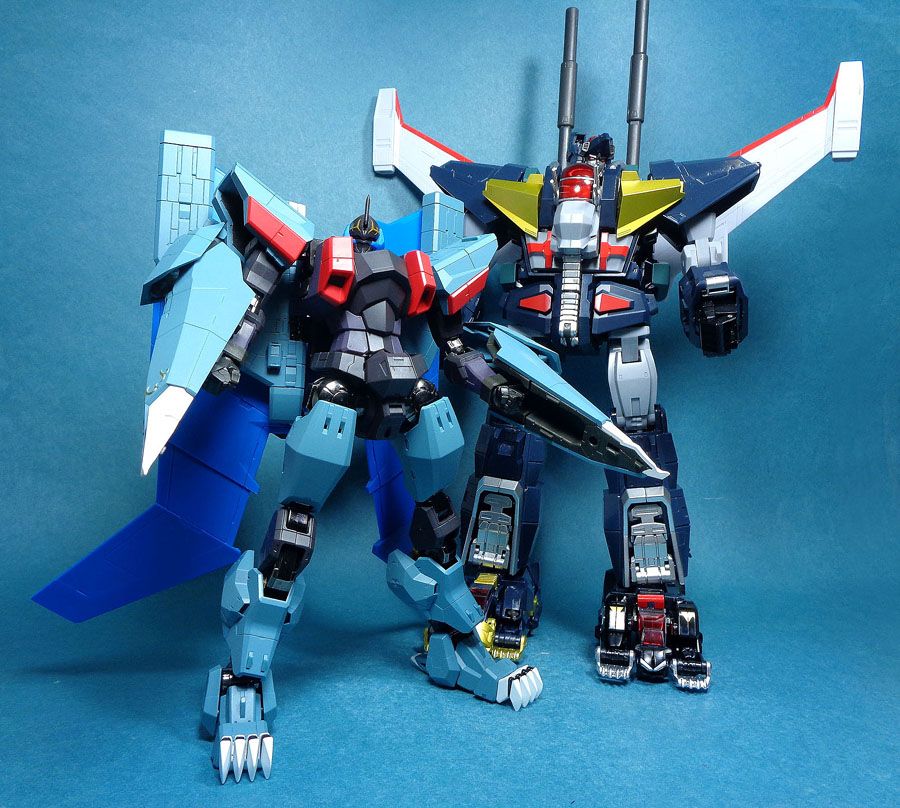 Again, the transformation here isn’t perfect, you need to manually attach the components needed to connect the Blackwing to the Dancougar.

The tail section needs to double-fold up onto itself.

The port plugs on Dancougar’s back also need to be removed. 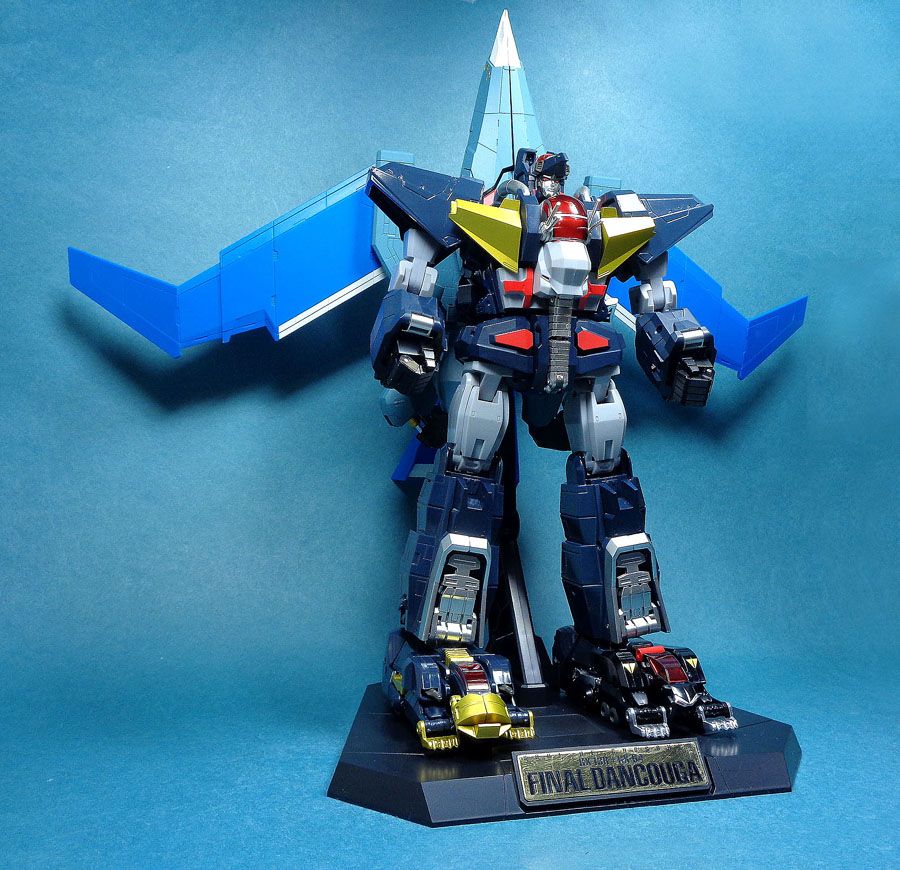 Near the end of the TV Anime (episode 35 of 38), Alan Igor sacrifices his life by doing a kamikaze attack on the Muge Empire’s warship lead by Helmut, crashing the Blackwing into the core of the enemy battleship and unloading all his armaments inside of it to detonate the vessel to clear a path for Dancougar. The concept of Dancougar and Blackwing being able to combine was never even considered until Masami Obari did an illustration for the Dancougar series DVD Boxset release in 2001, featuring “Final Dancougar”, which now presented the Blackwing serving as the new wings for Dancougar on the boxset cover.

FATAL FLAW ALERT!!
While the sets combined form is pretty cool to look at, there is a major flaw with it. Thanks to the original Gx-13 (and 13R) transformation design, the combined Dancougar lacks actual heels to prop itself up. Normally this wouldn’t be an issue with the Gx-13, since the back originally lacks any real weight. But with the addition of the Blackwing, this shifts the weight by a large margin to the back, making the combined form very unstable.

Alternately, if you can find something to help prop up its heels to prevent the whole thing from toppling over, that works too.

FINAL DANKUHOU!
Since the combination requires the Dancougar’s side cannons be attached to the Blackwing, Final Dancougar utilizes as different type of Dankuhou Formation, called the “Final Dankuhou”, using the built-in beam canon in the Blackwing as a new powerful add-on to its all-out ultimate barrage attack.

The Good
-Blackwing stands roughly 7.5 inches (8 counting the tip of the wings) and weighs 450 Grams.

-Diecast parts include:
–Almost all the joints
–Feet
–All the hinges on the wings
–Nameplates on the display base(?)

-Clever use of diecast, visibly spreading it all around. It gives the figure a very classy look and feel.

-Ratchet joints galore!!! I’m surprised even the bicep swivel and the forearm swivel have them.

I love these pistons, they compress when you move the legs. Too bad they’re not diecast.

-The color scheme. What’s up with that? It’s supposed to be based on the source material, but it looks nothing like the Anime short of the blue on the wings. what source material are they referring to? If anything, the Sentinel version of Blackwing got it right. Hmmm… Is Bandai planning to re-release a proper Anime color version of this one down the road I wonder?

-Can’t say I’m a fan of this super tight backpack clearance. Seems like it limits the waist mobility on this thing.

-I wish they used brighter red paint on Blackwing’s eyes. You can hardly make them out in any angle short of directly shining light onto the face.

The combined form can’t stand?!?!? What?? I can understand that Gx-13R may have overlooked that heel issue and it was fine at the time, since it never bothered the Gx-13/R, but at least address the issue now with this pricey set and give folks a pair of heel parts as an option to display this guy without the bulky base.

Japanese Youtube reviewer Wotafa suggests using the unused back ports for the 13R as heels that can plug into the feet units but it’s not really a proper fix IMHO (it’s not mentioned in the manual). I have to say I am annoyed that Bandai didn’t just give us an easy fix with option parts which won’t really cost Bandai much to produce. Sigh…

Regarding the issue with the original Gx-13 mold being unable to combine with the Blackwing, while it is true, you can cheat and still display them together, by having the Blackwing set up in the combined form and mounted on the display base, and then having the Gx-13 just standing un-attached right in front of it. It creates the illusion that the two units are combined. It works since you need the Blackwing to be always mounted on the base to make it all function anyways.


Overall, by itself, the Blackwing is a decent release. The use of diecast all around is a nice surprise and the figure looks really, really good thanks to the “Obari-style” proportions on it.

Admittedly, there are problems with the toy, starting with (1) the choice of color (seriously Bandai guys, are we even watching the same Anime?? gray vs teal??), (2) the parts-swapping transformation and then (3) the issue with the combined form being unable to stand without the base. These can be potential deal breakers for a lot of folks, not to mention the fact that this is a Premium Bandai Webshop exclusive release so it carries a hefty price tag with it to boot.

Bottom line, if you’re on the fence or just a casual Soul of Chogokin collector, this set isn’t an absolute must have I think. Even if you already have the Gx-13R, the combined “Final” form isn’t that big an improvement aesthetics-wise from the base Gx-13R either. The Final Dancougar is nice, but what really draws attention is the finish and colors of the Gx-13R itself, rather than the big blue wings of the Blackwing. I think this set is probably more suited to SOC completists or hardcore Dancougar Fans.

Hmmm… if Bandai ever does do a gray recolor of this set (for proper TV accuracy), I wonder if I would be happy or miffed….

Here’s the link to the Gx-13R Dancougar 2017 version review gallery. 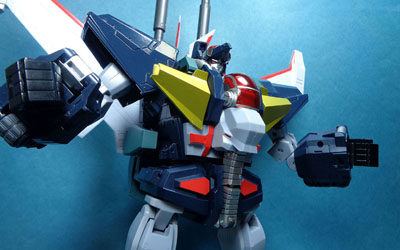 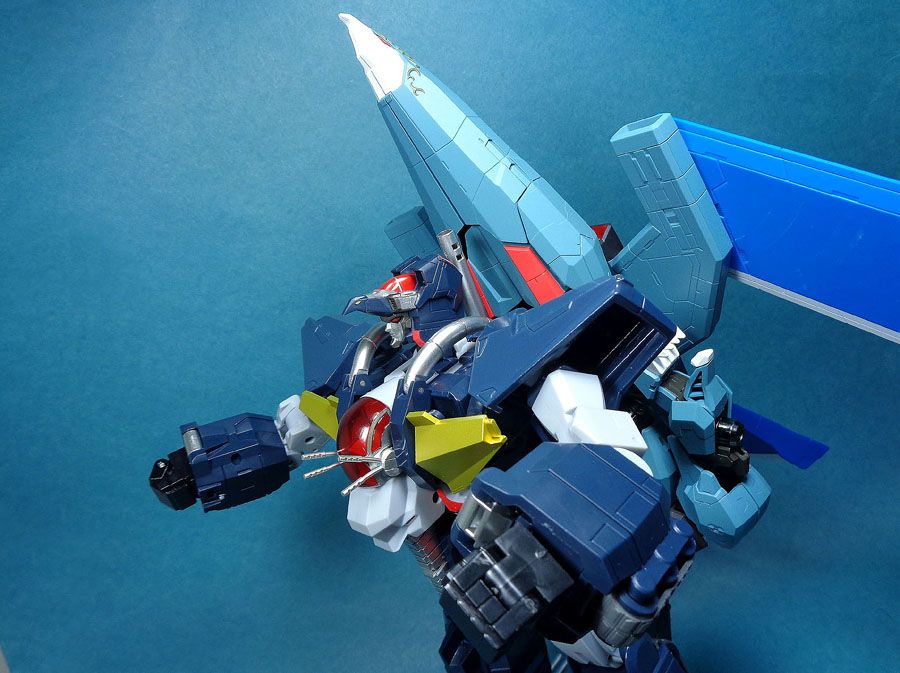