Daigo Otaki, the main protagonist of the series

A young orphan living on a post-apocalyptic Earth, Daigo discovers his late scientist fathers’s creation, the Gordian super robots. He uses them to defend Victor City from the Madokuta Organization.

The panther is a static action figure, so it does not have any moving joints. Clint is shown in the Anime to be so strong, he is able to take out enemy fighter vehicles in space all by himself.

IMPORTANT NOTE!
Protesser, Delinger and Garbin both come with a clear plastic “spinal disc” that is wedged into the back of the figure to help prop it up properly. Unfortunately, these pieces tend to fall out quite easily, so be careful not lose them.

Protesser is the first Gordian robot Daigo jumps into when things get tough. Since the unit is only slightly taller than an average person, it functions more as an exo-suit, augmenting Daigo’s strength and endurance, while adding more weapons to his arsenal.

In case you missed it, Protesser is an American football player-themed robot. Makes you wonder what Daigo’s father was thinking when he designed this before the apocalypse happened.

Naturally, his weapons are footballs.

For some reason, Protesser only comes with an open left hand. So he can’t grab onto the footballs with his right hand.

The “Gordian Bomb” comes apart to allow for various attachment options. Be VERY careful not to lose this tiny piece at the end of the football.

Before combining them together, make sure Protesser’s arms are positioned like so.

The second machine that Daigo combines with along with Protesser to increase his attack abilities. Delinger stands roughly double the height of an average human being in the Anime.

Aside from being used as a melee weapon, the Magnum Punch actually is capable of projecting powerful, wide-spread beams, capable of even stopping an avalanche.

Be VERY careful when getting Delinger’s feet in and out of Garbin. This section is very tight and difficult to move around.

The final Gordian unit that Daigo combines with. Garbin is the most powerful unit amongst the three and has the most weapons and attacks.

In the series, the Gordian mechs get some changes done to their animation models. The change is not explained in the show (I think), so it was more of a studio production reason, rather than a story-based upgrade for the character.

Yeah, I think I prefer the squarish design over this.

To match the proper antennae with this original design, the head had sharper-tipped antennae as well.

Proper orientation of the antennae.

Garbin Hooker! – removing and re-assembling his antennae, Garbin can reuse them as a melee knuckle attack weapon.

In the Anime, his antennae can also be repurposed as a shuriken-type throwing weapon. It’s an entirely different accessory here though.

No firing mechanism here but the forearm can be easily removed and reattached later. The forearm connection holds surprisingly well, considering that it’s diecast.

This stand is not included with this set. I just got a third party display stand.

The Shine Shield and Duke Screw can be combined to form the “Shine Shield Saber Mode” weapon.

The Shine Shield can also open up, allowing for 5 hidden beam gun cannons to fire from the shield, just like in the series.

The tip of the staff can also be equipped with the Garbin Hooker shuriken to be a spear.

The Duke Screw can also be attached to the Mighty Raibo.

Personally, I think it’s a bit of a cheat that the promotional art for this guy all feature the Gordian robots with units inside them, when the actual item looks really empty without anything inside and Bandai did not include any optional parts as gap fillers. To get this shot done, you’d need 4 sets of Gordian.

In the series, all 3 Gordian units can actually function and attack on the battlefield simultaneously, with Daigo only being in the Protesser. The 3 units also have a team-up combination energy projection attack called “Glacial Crash”.

I think there was supposed to be some sort of support post for each of the robots on the display base but the idea was cancelled? Some huge, unexplained holes on the base there.

Daigo is holds well in place thanks to some tiny pegs on the center of the platform.

The purple figure is Saori, Daigo’s sister, she was the first to pilot the Garbin in the first episode, however by directly interfacing Garbin without the other 2 robots, she nearly died trying to save Daigo from an enemy assault.

–Delinger
—Only its heels

-Garbin is pretty heavy by himself too!

-Tons of accessories! I think all of the weapons that appeared on the show are represented here.

-Daigo is incredibly detailed considering how small he is (2.75″). He’s also fun to toy with, not fragile at all.

-Flip out panels on the Shine Shield was a nice touch.

– Hollow recesses on Garbin’s antennae really make it look cheap. These should have been solid, or at least have covers.

-I really wish Bandai included spare bodies, the bigger units look so empty without anything inside.

-No open right hand for Protesser to hold footballs.

-Serious lack of paint application on Protesser and Delinger.

-Inserting and extracting Delinger feet from Garbin’s legs is NOT fun! Be warned!

-Missing/ cancelled support posts for the Gordian units on the display base? The holes are there for something right?

-Lack of “version 1 look” parts for Protesser and Delinger.

-Incomplete “version 1 look” parts for Garbin (torso should be different).

-I seem to have trouble turning Garbin’s head to look all the way to the left or right. There’s real resistance and I don’t want to force it. Is it due to the design of Garbin’s helmet?

-Personal peeve, this guy is just too big for the SOC line. At almost 13 inches, he looks more like a DX SOC. It just throws off the scale when placed next to the other SOC combiners.

Floppy leg joints on Protesser and Delinger!!! The lack of diecast or even paint on these two was bad enough, but giving us super floppy hip/leg joints is just adding insult to injury.

The ribbed area on the back of Garbin’s hands are supposed to have black paint applications, for some reason, the toy does not have this.

Lastly, the price on this thing also shocked me out a bit. Considering it’s roughly the price of either of the SOC Voltrons, we got our money’s worth there, here, not so much…


Overall, I’m not particularly keen on this set. Sheesh where to begin… it’s too big, pricey and lacks a certain level of finish that we’ve come to expect from the SOC line. The engineering hasn’t improved at all, considering it’s been so many years since Gx-39 Baikanfu (released in 2007) and they’re still reusing that concept with no new innovations. Getting Delinger’s legs out of Garbin is also a REAL issue.

There’s also the lack of diecast, plus the lack of paint on Protesser and Delinger, it all feels like a real step back for the SOC line (the CM’s Corp versions pulled it off, heck even Baikanfu’s Kenryu was amazing and had diecast).

This set is definitely for the SOC completionist and/ or Gordian Warrior diehards. But I think it’s an easy pass for the casual collector. It’s definitely one of my lower ranked SOC releases ever, bottom 20, at best.


If you want to check out the series, it’s up on Youtube, but in unsub-titled and compressed screen format. 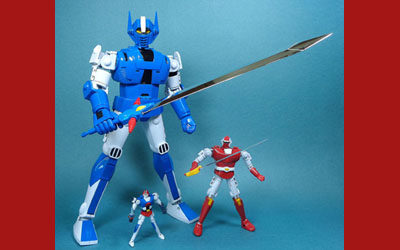 Funfact: The new attacks ( Bomb Drill, Magnum Punch) and use of swords are a part of Gordian’s upgrade (Daigo’s skill awakening?), which started on episode 21.

Funfact 2: In case you missed it, the concept for the Gordian toy is based off the Matryoshka-style doll (a.k.a. Russian Nested Doll).

Funfact 3: In the second episode of the series, after he writes his name in the sand after defeating the bad guys, we get formally introduced to our titular hero. Err, kinda.. I guess Daigo doesn’t know how to spell..? lol.