Box dimension more or less matches that of the Gx-96.

The G-Arm Riser comes separated in the tray, so you will have to do some assembling.

Getting the heel to snap into the foot is tricky, but you’ll be surprised when you get it done.

The feet units then plug in here:

First appearing in episode 32, the G-Arm Riser is usually an unmanned support aircraft that launches armor parts that combine with Getter Go to form Super Getter Go. It can also be used to transport a fully combined Getter Go faster to a battlefield (Getter Go only has limited flight capabilities when combined, unlike Getter Sho). When deployed, the G-Arm Riser is remote piloted by Yuji back at the base.

The set comes with an attachment for the Gx-96’s display base so you can pose the G-Arm Riser together with the Getter Machines on the display pedestal. 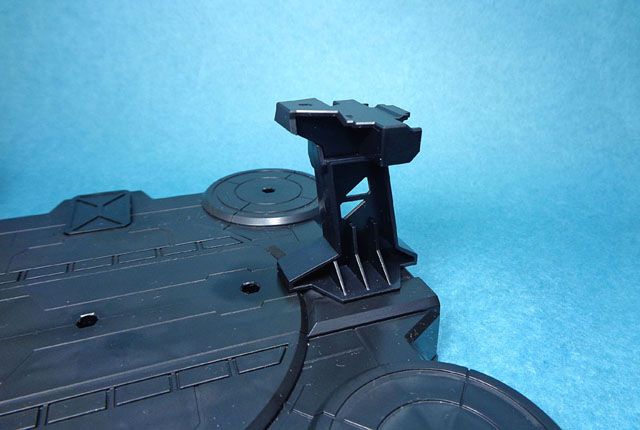 Personally, I find it easier to plug in the attachment into the G-Arm Riser first then into the base, rather than the other way around.

Once all the armor bits are launched at the Getter Go, this is what you’ll be left with. It’s called the “Container Machine”.

To shift the front c0ckpit section to the back, you will have the use the pick that comes with this set to pluck out the tiny connector peg.

Created only for use on the Getter Go, the armor is also made from G Ore, sharing the same powerful magnetic properties of the Getter units in this series, allowing them to link up. The additional energy reactors (presumably nuclear or plasma, not Getter Ray) installed within the G-Arm Riser’s armor pieces greatly increase the Getter Go’s energy output, so that it can now maintain the Sword Tomahawk for longer periods of time.

Once combined, the armor only serves as an additional power source for Getter Go’s Sword Tomahawk, it doesn’t seem to add any new attacks or increase the damage output of Go’s other attacks (I think).

Ugh… prepare to be constantly annoyed by the hip skirts falling off. I am not a fan of how these things easily fall off from the figure.

Serving as Getter Go’s ultimate attack, the Sword Tomahawk’s powerful blade is made up of pure energy (even though it seems solid). When first manifested by Getter Go in episode 28, the Getter’s energy reactors overloaded from the strain. As a work around, Dr. Tachibana creates the G-Arm Riser armor unit which houses additional energy reactors to help stabilize the Getter Go’s output and maintain the Sword.

Optional concepts from Bandai
To give folks more “bang for the buck”, Bandai decided to spice things up with this set by giving us some conceptual options to work with.

Concept gimmick No. 1. – Attaching the Getter Sho’s Drill to the backpack and adding a shield for Getter Go from the Container Machine. This never happened in the Anime and it’s something cooked up by Bandai to minimize “kibble” leftover from the combination.

The shield clips onto the hinge bracket on Getter Go’s forearm.

Concept gimmick No. 2 – attaching the Container Machine’s boosters as an additional backpack to Getter Go and converting them into overhead cannon arrays.

Concept gimmick No. 3 – attaching the remaining pieces of the G-Arm Riser, along with the original Tomahawk accessory from Gx-96, to the Sword Tomahawk to make it truly outrageous.

Putting it all together on the Getter Go leaves no kibble left from the G-Arm Riser unit. Smart.

Even with everything equipped, you can still use the original Gx-96’s display base attachments to secure Super Getter Go in place. 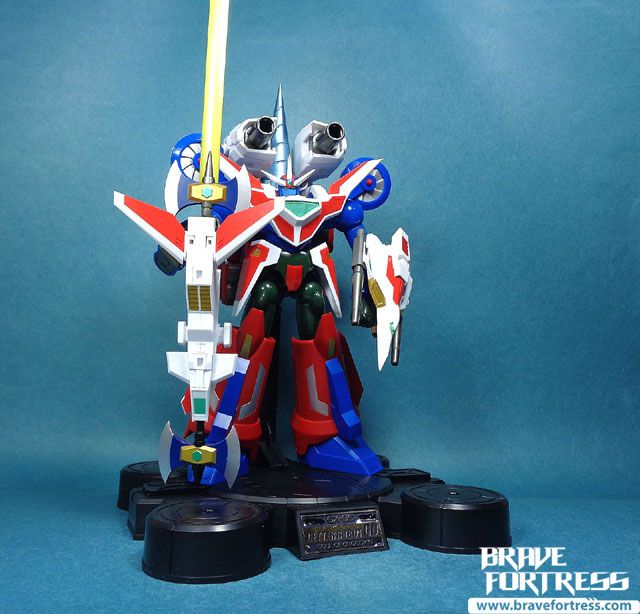 Admittedly, I forgot to take a measurement of how tall this whole thing is with the Sword Tomahawk like that and all, but I think it should be around 14 inches or more.

-The combined form is pretty good, all things considered. Articulation isn’t hampered much in any way.

-For the most part, the connections are solid, except for one spot (see “The Ugly”).

-I’m so glad Bandai included a pick for us to use to pluck out the tiny pegs on the toy.

-No diecast parts anywhere in this set.

-Since everything is white, unpainted plastic, hopefully we won’t see any premature yellowing down the road? Sigh.. Sometimes I wish Bandai just paints everything like Fans Toys does their wares.


The Ugly
-The skirt attachments fall off way too easily, it almost drove me crazy at one point. Lol… I have no idea if I was doing something wrong or if it really is a pain in the neck to keep them attached. It only happens on the right skirt plate for me.

Overall, a pretty good set. If you’ve got the Gx-96 Getter Go, then this thing is a must-have to complete it. I love the new conceptual ideas Bandai added to this set, since everything can now be equipped on the final combined form. Very clever. While it is a bit pricey, considering it’s entirely plastic, I think it is well worth it.


Funfact: The G-Arm Riser and Super Getter Go appeared only in the Anime adaptations and never popped up in the main Getter Saga manga (the Anime happened in a different continuity).

Funfact 2: Even with the armor equipped, the Super Getter Go still cannot fully fly great distances in combat. It still only has limited boost and hover capabilities.

Funfact 3: In case you missed it, despite the titular mecha being called “Getter”, the units do not use Getter Ray energy. I’m not sure if Getter Rays even exists in this Anime, as it’s meant to be a stand alone series, apart from the Getter Saga canon. In the Manga, Getter Go operates via plasma energy due to the now-established deadly properties of concentrated Getter Energy to humans after the events of Getter G (except for Ryoma and Hayato, Michiru Saotome and all of the staff at Saotome labs dropped dead from massive Getter radiaton poisoning).