Stealth Gao II does not come with the left and right Gaogaigar forearms. You will have to get them from the Gaogaigar set. 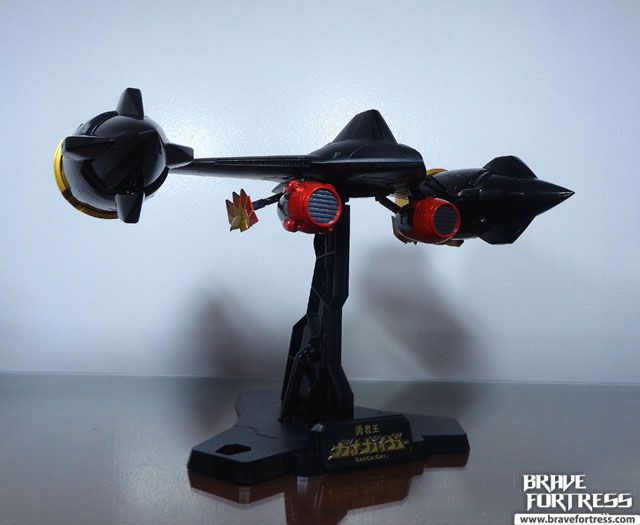 Great details on the “boosters”.

Just like in the anime the 3G logo is now green instead of yellow. 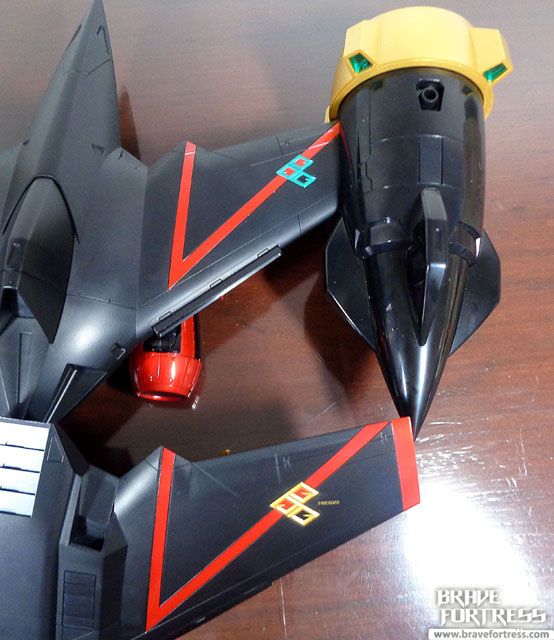 Connecting the Phantom Rings to the forearms requires attaching these clear adaptor plugs.

The Spare Gaogaigar Head
A spare head is included for this set, the head features a “fully formed” Gaogaigar head so that the depth of the eyes are more show accurate, instead of a bit more “sunken” like the default head. It’s a minor bonus but it does require having to remove the default Gaigar head from the ball jointed neck.

There’s also the optional “maskless” face plate, which is based from the scene of 3G’s final battle with the Z Master in the TV series, where Gaogaigar’s face plate was blown off (it’s a staple with the Brave series’ final battles). To equip this face, you will have to do the headswap and attach the new head from this set.

-Not much diecast in this set actually. The metal parts are only
— the Ultech Engine

— the brackets that hold the connectors from the Stealth Gao II to the lion’s mane chest pieces.

-For the “complete” displayed StarGaogaigar with Goldion Hammer setup, the weight becomes a whooping 2562 Grams and 15.25” tall (inclusive of Stand weight and adjusted height).

– The additional struts on the sides of the base are a nice touch. They add more balance to the display base, which is important considering how heavy the overall StarGGG + Goldion Hammer set is.

-Love the graphic design on the back of the box, a real throwback to the GGG TV series visuals.

-Adjustable angles on the boosters

-Nice of Bandai to include this little clear plastic arm to help hold the left arm up for long term displays.

The Bad
-Attaching the boosters to the wings can be very frustrating sometimes. You just have to find the right angle and push it in until you hear the “click”.

-Ultech Engine covers falling all over the place. It can get annoying sometimes. I wish there was a better way to execute the parts swapping from solid black to clear green plastic.

-Attaching the Stealth Gao II somewhat limits Star GGG’s poseability, but it’s still good. It’s attaching the Marg arm and the Hammer to Star GGG that makes it all hard to pose. I guess it is what it is.

For the life of me I cannot attach the Gatling Driver halves together!! I’ve tried everything. It just won’t lock in! Very frustrating. I don’t know if this is just limited to my unit. I tried swapping the orange half with the regular Dividing Driver, still no luck. The problem lies with the new Gatling Driver’s connector.

Overall, it’s okay, but I do find it to be a tad expensive, considering all we get is really just the new wings for the price of something like a full regular Soul of Chogokin figure (Eg. Danguard Ace).

I didn’t really have much trouble balancing Star Gaogaigar and that was quite a relief when you think about how top heavy this sucker is. I’m glad Bandai did an incredible job making Gaogaigar’s legs durable enough from the get go to handle such weight.

Bottom line, if you love Gaogaigar, then this guy looks really great with everything put together. Just be ready to shell out roughly the price of 3 SOCs to complete this whole setup.