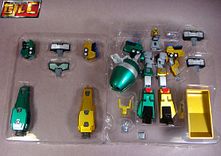 With his older “brother” ChoRyuJin

With Gaogaigar disabled after falling into a trap set by the 31 Primevals, the Twins were the only hope. Separated, FuRyu and Rairyu weren’t able to form GekiRyuJin, with the arrival of HoRyu and EnRyu, bringing with them the new mysterious energy from Jupiter called “The POWER”, new combinations are formed! GenRyuJin and GoRyuJin!

Some minor issues about the set though.

Mine came with some paint problems with the shield. Paint pooling? Hopefully this is isolated.

Also, the set was supposed to come with Climber 1. I guess they took it out as a cost cutting measure.

Funfact: In summer 2011, San Three released a Pachinko game based on Gaogaigar, it’s based on the original series and the Final Fusion sequence was redone ala Genesic Gaogaigar quality.