Despite the huge size of this toy, I wasn’t really impressed with it. The play features weren’t as awesome as that of the old TMNT lair. 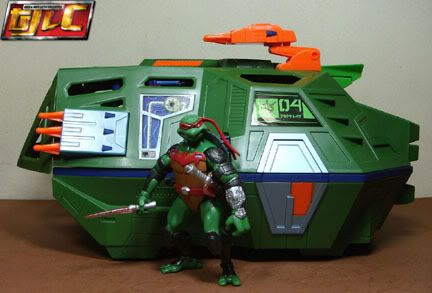 Folds out to become the Turtle Lair of the future.. not..

… to reveal chairs for driving the Hover HQ.

The left section has a Sho’konabo training holo dummy, the scale is way off though….

The right section houses the “computer” station and radar array.

The center area has a booby trap barrel launcher and working elevator and zipline.

Turtles in the Future.

That’s about it. No real wows with this playset. The real cool thing about this playset is that it merges with the Hyper Shell to form the Hover Shell tank.

Vehicles of the Future.

Unfortunately, the Fast Forward series only lasted one season. Too bad we will never knew how the TMNT will get home..