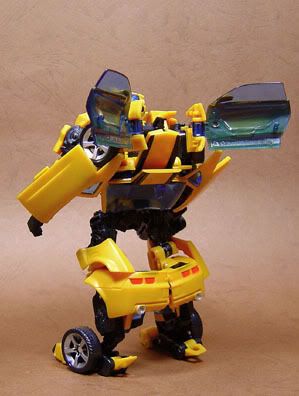 Bumblebee is one of the cooler looking figures in the line and is the coolest and most poseable Deluxe class figure. 🙂

Comes with his “Plasma Ejection Cannon”…

… which also transforms into an energy blade weapon.

Bumblebee and the All Spark

The cube is actually the old Pizza Hut Anakin/Darth Vader “holo” cube toy from a few years back. 😉

Definitely one of the harder figures to transform in the line.

BTW to correctly transform Bumblebee back into his 2008 Camaro vehicle mode the shoulders have to be folded in like this. A lot of people have trouble with this one.

Comparison with the Takara 1970’s Bumblebee

For those who didn’t get the chance to read the TF Movie Prequel comic. It was shown that Bumblebee thwarted Megatron from reaching the All Spark as it was escaping into space back on Cybertron. Megatron “rewarded” Bumblebee’s interference by tearing out the latter’s vocal processors, leaving the Autobot mute and unable to talk.

It was mentioned in the comic adaptation that Ratchet was able to repair Bumblebee’s vocal processors, but at what time during the whole final city battle sequence, I have no idea.