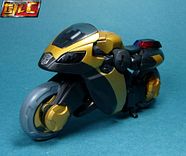 I chose to go with the Prowl without the sidecar and armor since this is the more “toon accurate” version of the character, the Samurai Armor Prowl had a lot of missing paint applications on the toy.

Prowl in the TF Animated-verse is a cyber ninja who is a master of Circuit-su.

The toy comes with a stoplight weapon and ninja throwing stars.