I think they could’ve made the box smaller though, by changing the location of the wings. A lot of dead space in the tray above Omega’s head.

As per norm with DX9 releases, it comes with an 11×18 sized poster.

Optional sticker sheet (I didn’t use it) is included, plus a “credit card” thick plastic character card.

The arms arrive with the connection joint collapsed. There is no way to dig them out without using a tool like a screwdriver. They aren’t too stiff or difficult to dig out, but it cannot be done without a tool to pluck them out first, as there’s no surface for one to grip onto as is. 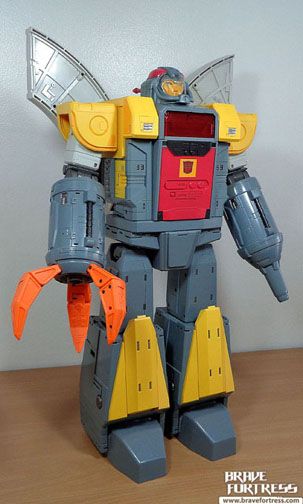 Wow. So my third party Omega Supreme is finally here. This guy is incredibly huge. I was deciding between this one or the Fans Toys Terminus Giganticus. Admittedly, the FT version does have a better body sculpt and I do love the darker red chest on the FT (this one is a bit on the dull red side). But ultimately, after browsing reviews and hearing about the way the FT version’s knees tend to cause the figure to wobble, I decided to stick with the DX9 Gabriel and I have to say I am not disappointed with this figure.

The face sculpt is pretty good. 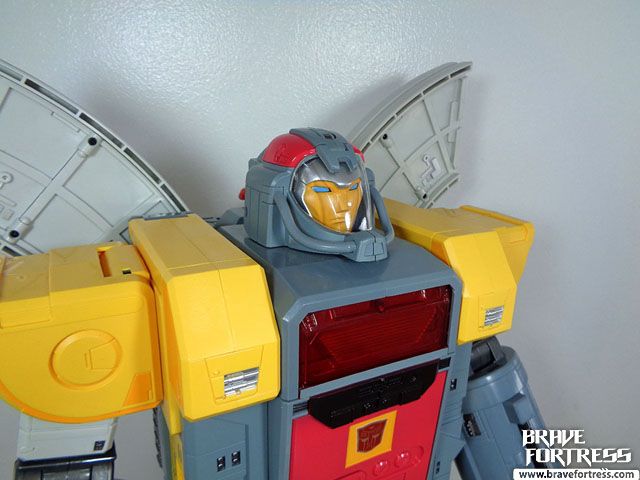 The set also comes with a spare “o-face” faceplate if you want to swap the faces. 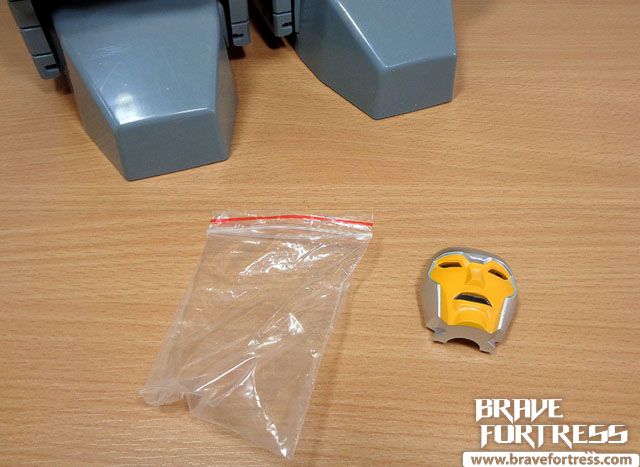 For some odd reason, the crotch section has a panel that can open up, I just opted to toss in the spare face in, which makes it even weirder now. lol…

The face cover opens up.

Lifting the tap up top gives you a grip so you can swivel the computer terminal out. This is actually for the tank mode.

Gabriel comes with an optional neck joint, just pull the head upwards to reveal it, I think this really trumps the FT version since the FT version does not have this joint.

Thanks to this secret neck joint, we can now make Gabriel look up or down. 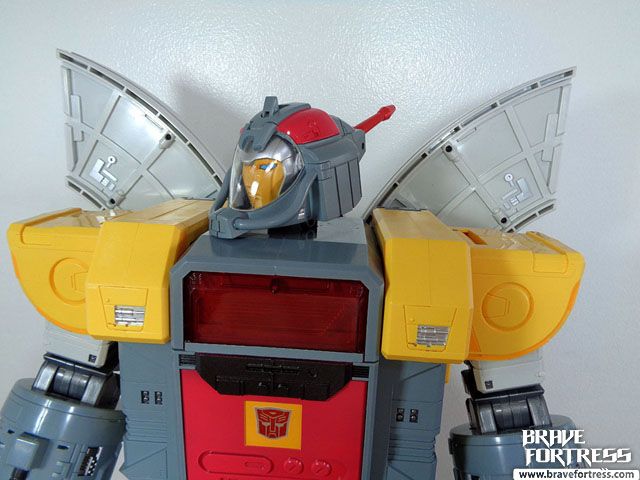 He looks way more dynamic since he can look up or down now.

Knees have “pistons” that come out when you bend the knee joint. The FT version does not have such aesthetics.

Figure comes with a waist swivel. Always a nice addition.

Surprisingly, despite lacking any obvious diecast (I couldn’t feel any metal parts on the outset), this thing is extremely heavy!! It’s actually heavier than the Fans Toys Terminus Giganticus!

Dx9 Gabriel stands about 22 inches tall up his head, but his wings go up to 23.5 inches.

Light up LEDs in the arms. The activation buttons are easier to reach here (it’s right there) as opposed to the FT version which requires having to remove parts to get to the switches. One problem I have here is that there seems to be no way to reach the batteries, short of totally disassembling the arms down to the screws? I hope the batteries don’t leak.

One downside I didn’t like is that due to the size of the figure and the use of Styrofoam tray, the feet wound up with scratches due to friction contact with the styro, wish they put in some sort of plastic liner to protect against scratches.

Disassembling Gabriel is easy, he’s heavy but the pieces don’t require a lot of effort to disconnect.

Another thing that I really didn’t like was attaching these panels to the slots in the skirt plate slot (I forgot to circle it in the pic but it’s those tiny slots at the very top of the image). It is not easy. I just opted to leave them out like so instead, rather than trying to force the connection onto the gap. 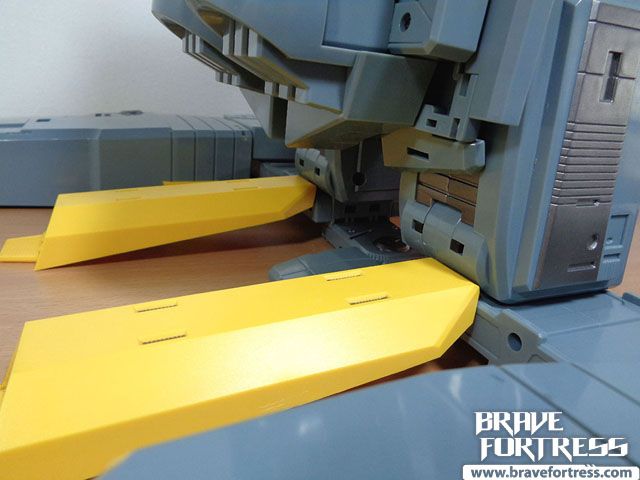 The tracks of the base mode span roughly 42 inches in length.

The tank’s side cannons actually feature a hinge joint so the cannons can aim upwards. Pretty clever gimmick IMHO.

You can put Spike into the control turret for the tank mode. 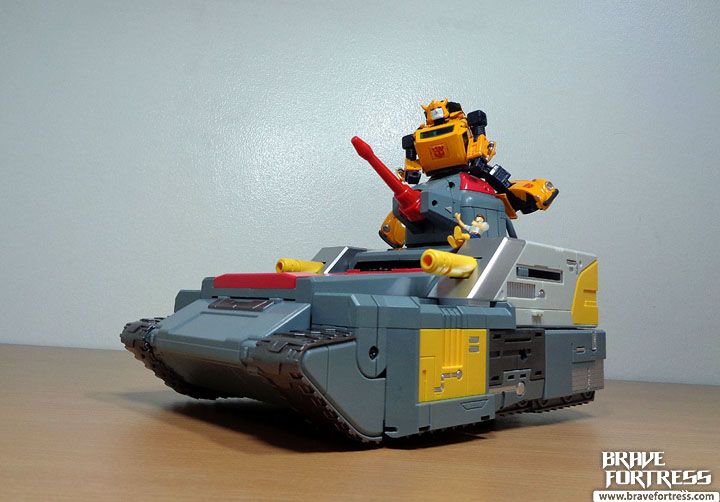 Very G1-ish. I love it!!! It should be noted that the tank is not motorized and does not travel along the track by itself (the G1 toy did). Ah well. 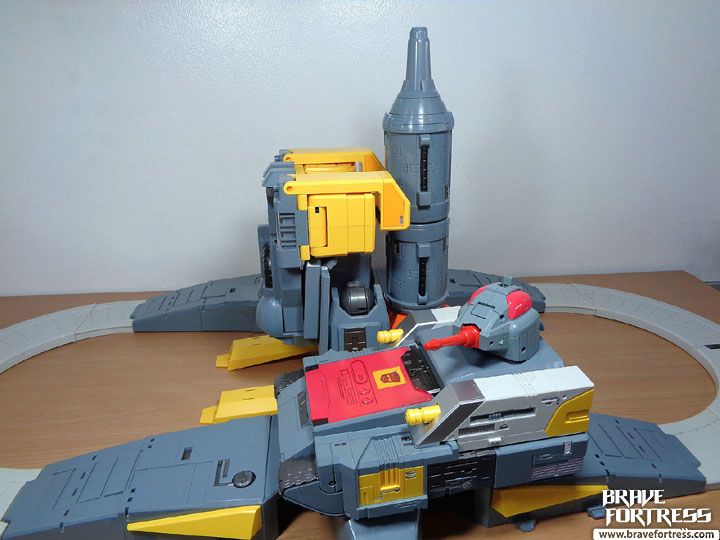 I’m not sure if this was mentioned in the manual (I couldn’t seem to find the page) but you can open the panels on the rocket to reveal an access ramp.

Since both forearms are the same (only the ends are different), both actually have the access ramp panel.

The rocket mode is obviously small in comparison to the other MP TFs, you can put Spike or maybe some Titan Masters into the rocket. In the cartoons he can carry several Transformers inside and served as their primary transport when going to space.

With his former friends, the Constructicons.

The origin of the Constructicons was retconned in season 2, they were now living on Cybertron during the Golden Age, before the war (as opposed to being built by Megatron on Earth in season 1). Megatron had captured and rewritten the Constructicon’s programming, going as far as adding a new mode for the crew, Devastator. They clashed with their old friend Omega Supreme since then. 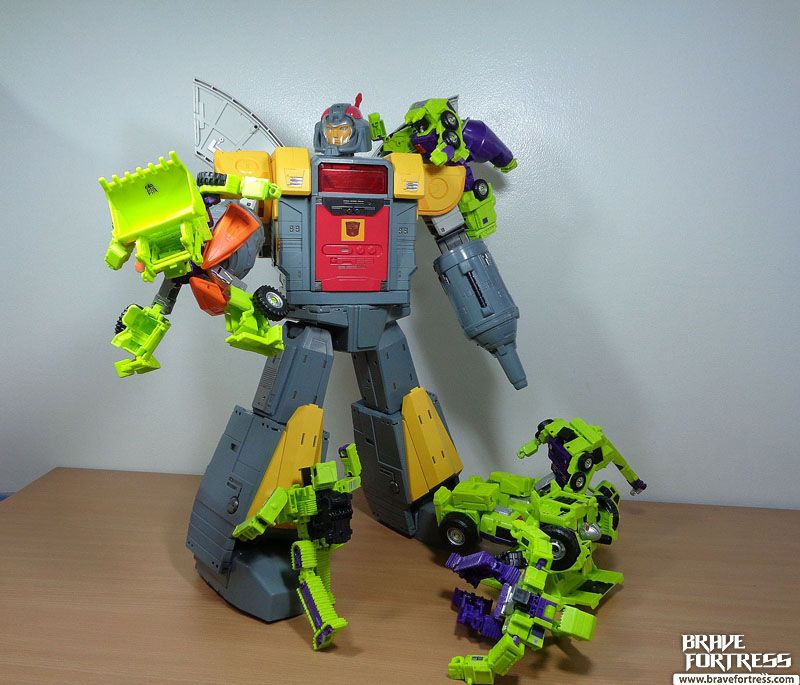 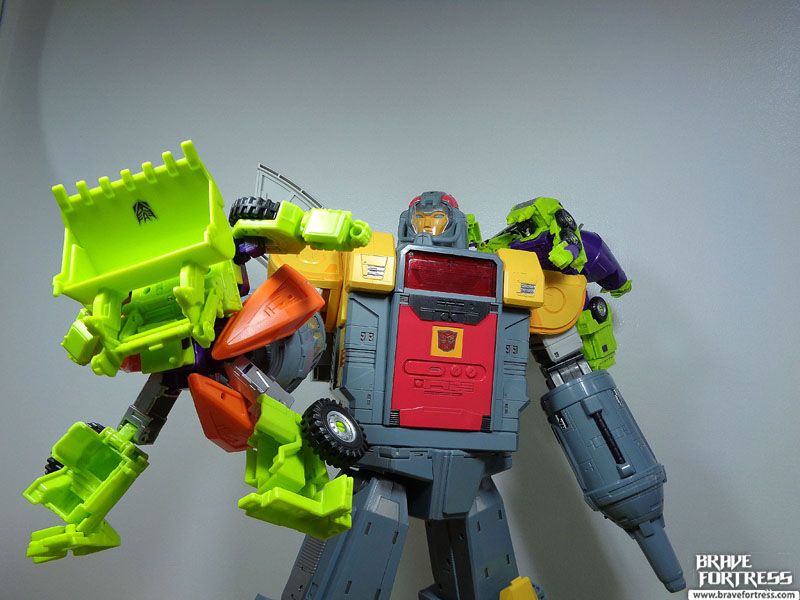 Yeah… I think I need a taller Devastator.

With some of the Masterpiece class Autobots. He is very, very big indeed. 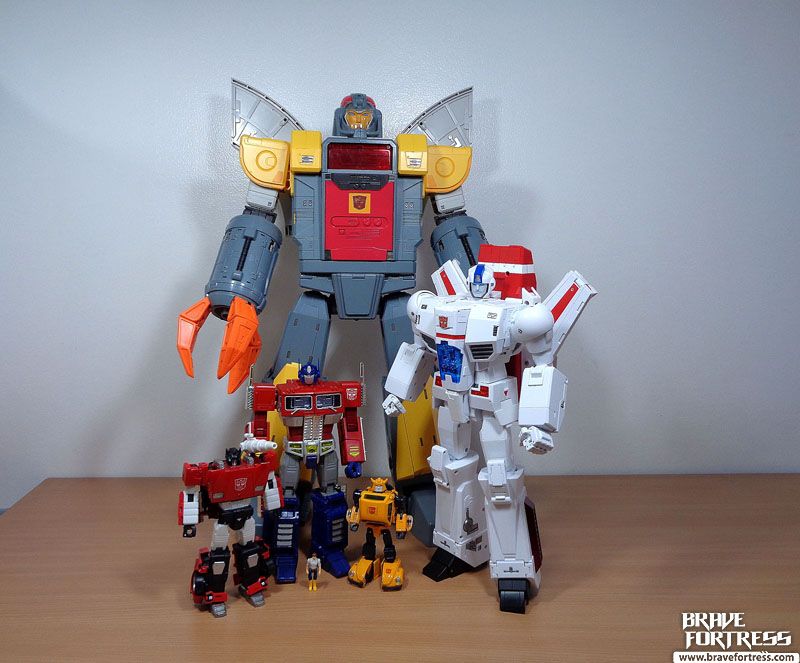 With the other big bots (I didn’t include Trypticon anymore since there wasn’t enough space on the table and Trypticon is much shorter than these guys). 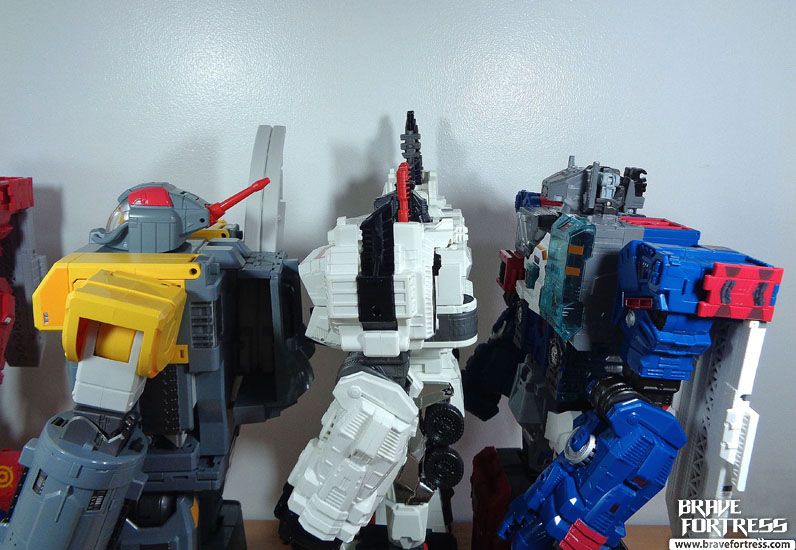 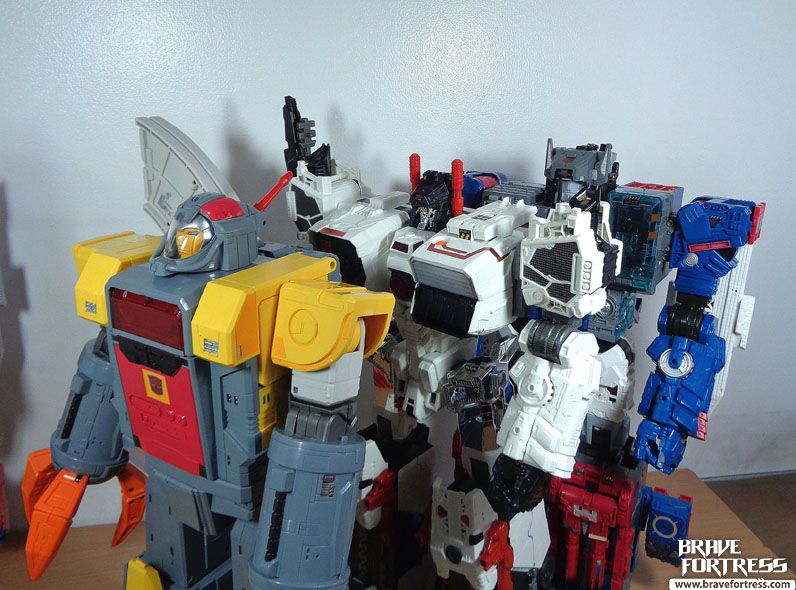 Seriously… with this much firepower in their ranks, how are the Autobots still not winning the war??

Overall, I really love it, no real complaints or quality control issues with the toy (except for the scratching on the feet). The toy is big, and heavy, super impressive and will make you stop in your tracks to look at it when you pass by. It’s amazing.

I prefer this over the FT version (I got to handle that once), due to the fact that the FT version’s knees aren’t stable enough and causes the toy to wobble. The FT Terminus Giganticus won’t fall over but it is kind a huge negative if it can’t stand properly, so that was a huge red flag for me. The sculpting and colors are indeed better on the FT but as far as weight, design, added features (raised neck joint, visible pistons for “knees”, easier way turn the electronics on and off) and “ease of transformation” goes, the DX9 Gabriel wins it.

I can’t comment on the Wei Jiang Ultima Guard since I haven’t had the chance to handle it personally, but the Ultima does feature more electronics (sound and speech) and is much more budget friendly (half the price of the FT), but for me the aesthetics of the WJ Ultima Guard seem a bit too skinny to match the G1 animation model of Omega Supreme. So I decided to go with the DX9 for my 3P Omega Supreme.

One thing that always made me wonder in the 1986 TF movie, where was Omega Supreme during all the battles? 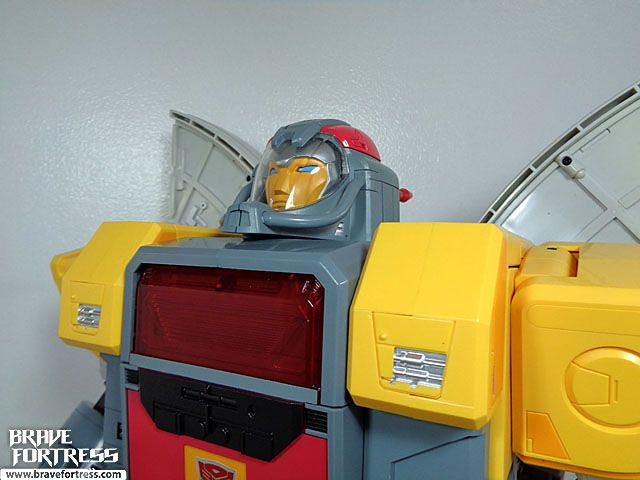