Originally, the name Ironworks was applied to the little Micromaster that came with the Autobot Construction Station (or communications tower). The G1 set was also named “Build Base” in the Japanese Transformers Zone continuity.

His only accessory is his blaster.

His right hand is his crane, you can’t really equip anything into it.

His blaster can split into two different guns.

Ironworks is a Modulator, similar to the Weaponizers from the Siege line. Transforming him involves taking him apart and reassembling him into his alternate modes. 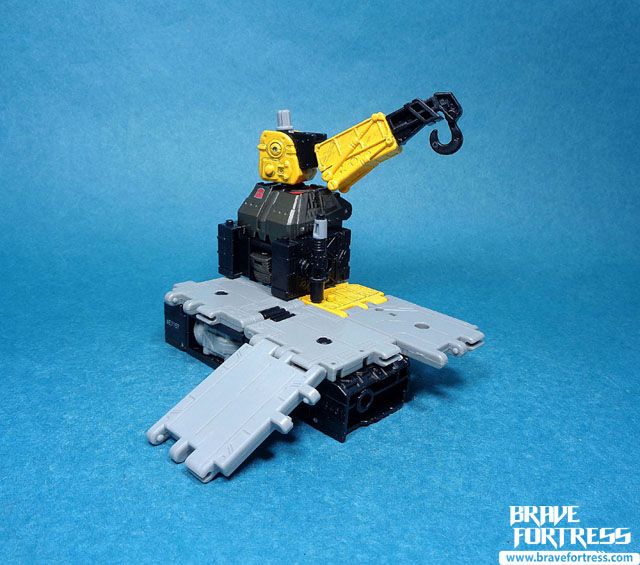 In the original G1 toy’s bio, Ironwork’s construction yard was a powerhouse, with a repair bay capable of fixing almost anything.

It’s too bad his crane isn’t functional, there’s not even a joint to move the hook.

You can park two Micromasters on the platform.

Communications Tower mode. Similar to the G1 toy’s alt mode, this toy also features an alternate base mode. While this is not shown in the instructions, you can gleam this info from Greasepit, Ironwork’s Decepticon redeco figure.

Do note that getting this setup in place is VERY hard, due to the paint covering up the slot a bit. You’ll have to manually shave down the paint with an Xacto knife or box cutter to get the peg to fit in.