Valued by both sides of the war for his skills, Doubledealer works for whoever pays better, with neither faction aware of his alternate identities. He is binary bonded to two different Powermasters who are unaware of each other inhabiting the same Transformer as well. In the Netflix War for Cybertron: Earthrise series, he is shown to be the leader of a group of Mercenaries and captain of the ship “Fool’s Fortune”, selling his team’s services to whoever offers the best pay.

This flap sticking out is a bit awkward, I wish they made it land flush instead.

I wasn’t sure if this guy had ankle articulation, turns out he does. Not bad.

In the vintage G1 Toy, plugging in Powermaster Knok unlocks his “Autobot mode”. Knok is sold separately with Skar in the Generations Selects “Soundwave Spy Patrol 3rd Unit set”. Knok is a retool of Siege Rumble. You don’t need the “Powermasters” to unlock his transformations this time around.

Optional search light and gun can be pegged onto his shoulders as well.

His shoulder panels can be lifted up to change his allegiances. This should really confuse his Powermasters though…

Doubledealer’s “Decepticon mode”. He basically functions as a robot beast while working for the Decepticons.

In the G1 toy, his “Decepticon mode” is unlocked by Powermaster Skar. Skar this time around is sold separately with Knok as a part of the Generations Selects “Soundwave Spy Patrol 3rd Unit set”. Skar is a retool of Siege Ratbat. Like Knok, you don’t need this “Powermaster” to unlock transformations here but it is kind of nice to have them around.

Doubledealer’s vehicle mode is the only mode that is shared by both Autobot and Decepticon modes. Which should be pretty confusing for both sides if he’s in this mode while on the battlefield? 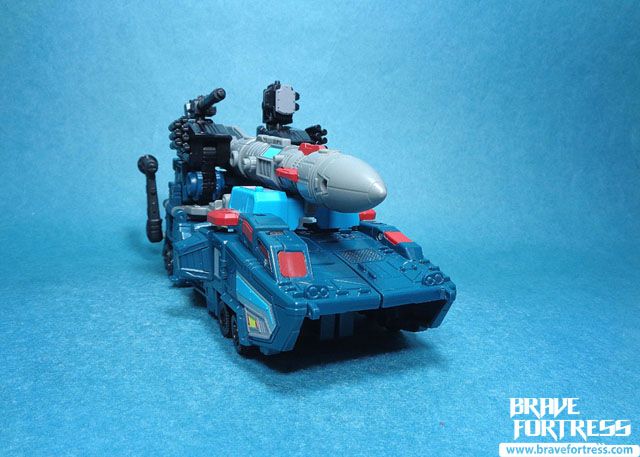 A Powermaster can also ride in the chest panel in vehicle mode.

Vehicle mode can dock with other Transformers ramp connections too.

Overall, not bad, I do wish his torso wasn’t so big, it throws off his proportions for no reason, still, it’s a huge improvement over the G1 and Generations versions of this character.