Fanstoys items usually come with an outer plastic baggie to protect the box (mine didn’t this time around though).

The figure comes with various faces, the one without the “soul patch” is how he appeared in the US cartoons, while the ones with the patch are from the Japanese cartoons. Since the “soul patch” adds some character to his look, I went with it.

To change the face plate, just pick upwards at the chin until the face comes off.

Quietus actually does have a waist swivel but it’s a bit tricky to do, you have to remove his waist panel first and reset it so that it has allowance for the waist rotation. 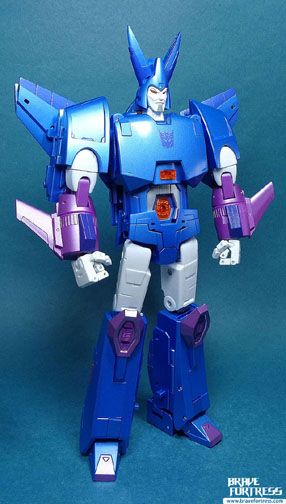 Cyclonus is Galvatron’s second-in-command, a fiercely loyal warrior and a competent field leader. It’s interesting to note that Cyclonus could actually lead the Decepticons to victory were it not for Galvatron’s insanity getting in the way. 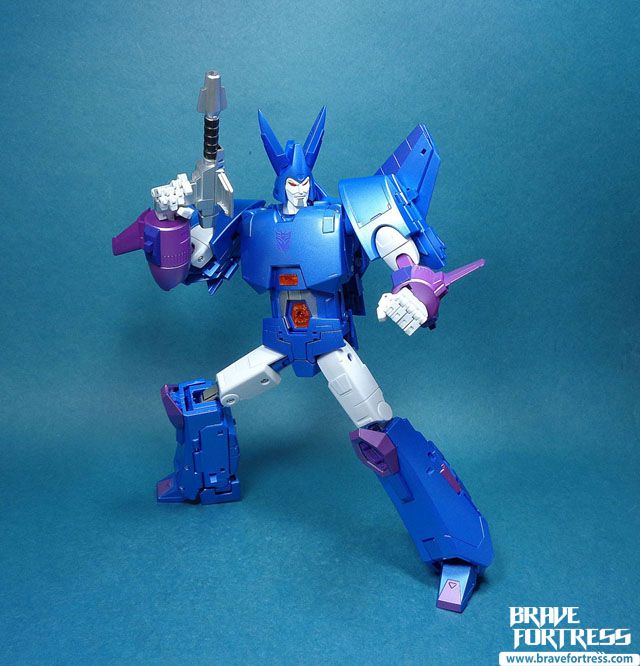 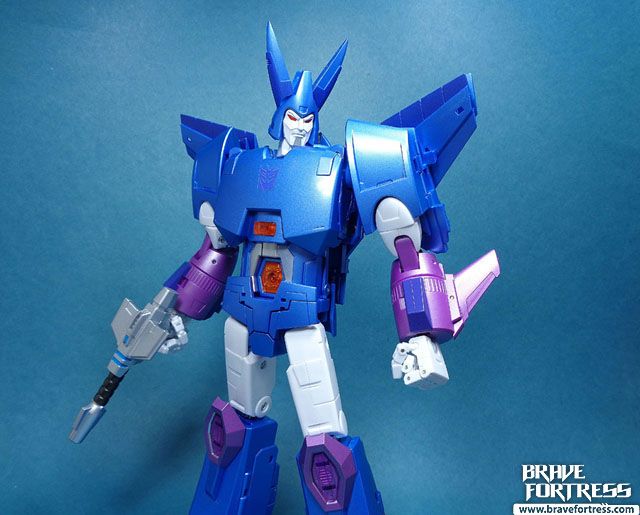 The original gun that came with the G1 toy – the “oxidizing laser”.

Thanks to the design of his wrists, you can pose the hands bent to the sides. Very impressive.

He comes with his Nebulan Targetmaster partner, Nightstick.

Back on Nebulos, Nightstick was a master criminal and a member of Zarak’s Hive, before being Binary bonded to Cyclonus. His temporary capture by Brainstorm lead to the latter scanning the former and obtaining the secret of how to create Targetmasters for the Autobots. He was voiced by Peter “Optimus Prime” Cullen back in the G1 cartoons.

One of Cyclonus’ less than obvious talents is that he can also do mass shifting, allowing him to become Galvatron’s personal attack craft.

I can see the issue most folks have with this part not folding down flush. It’s very hard to get it into position, I wonder if this was fixed in the T version of this guy?

IDW Cyclonus parts -The set actually comes with parts for you to convert this guy into his IDW counterpart.

First unscrew all the screws on the head (including the one behind the face plate), to replace his “ears”/helmet horns.

… and then just plug in the hip skirts.

In the IDW comics, Cyclonus is actually an ancient Transformer older than almost anyone, a Member of Nova Prime’s Ark crew that became lost to a void and lost in time, he was restored by Galvatron. He eventually saw the horrors caused by the Decepticon cause and left, later joining up with Rodimus and the crew of the Lost Light.

While the default head features his helmet with the horn broken. You can opt to put his “unbroken” helmet in.

His helmet had been broken horn for a good deal of time in the comics (a result of crazy Whirl charging him and plunging them both off a cliff when they first met). It was eventually repaired when they got back to Cybertron.

You can also transform him with this head, just fold the horns together.

For some reason, my unit came with extra sword holders attached, apart from the holders that are already included with the hip skirts. So I guess I now have spare sword holders.

Adopted from how Japanese Samurai have two different sword lengths, when used in tandem they are called “Daisho” meaning “big-little”, giving the samurai more versatility in battle. The shorter sword is called the Wakizashi and used for close quarters combat.

Cyclonus can also grip his sword with both hands.

It’s interesting to note that it was Cyclonus who finally killed the maniacally insane zealot Star Saber in the IDW comics continuity(yeah, he’s evil here). Slicing the poor, psychotic fool in half while in jet mode.

With his commander-in-chief, Sovereign (Galvatron) 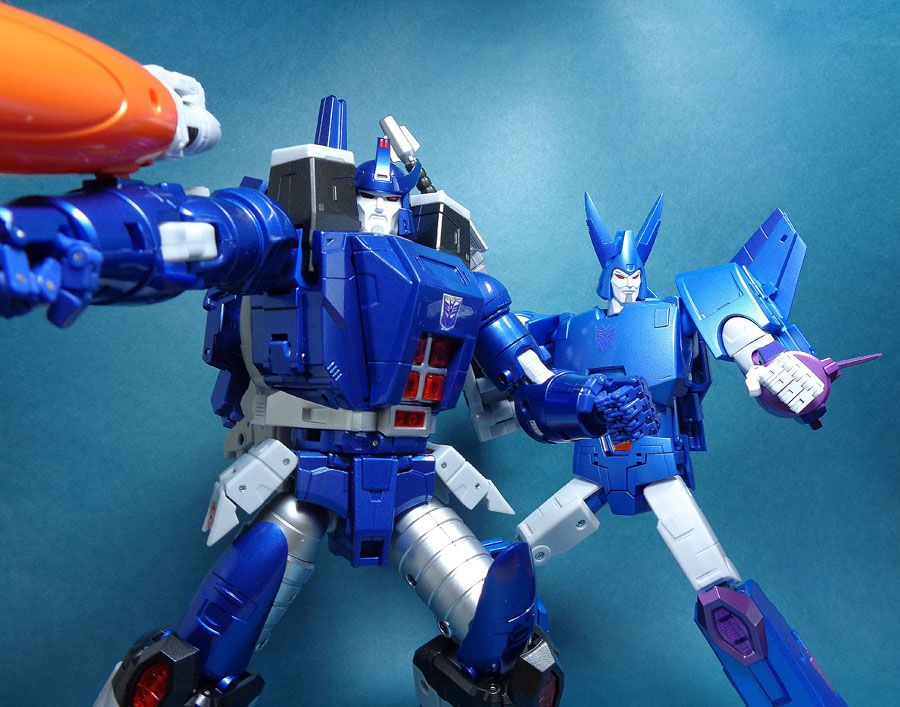 Overall, another top notch set from Fans Toys. The figure is amazing, the proportions look very, very awesome in both modes and the extras make the set even more amazing! The only real problem is transforming him, as it is very, very tricky, even with watching video guides. I’ll probably never transform him again, lol. I also had some difficulty trying the get the front area of the c0ckpit to clasp flush in fighter mode, I think this is an inherent problem with the mold since I think everyone has this issue?

I do wish I had gotten the FT-29T version though. I waited too long and the thing eventually sold out locally and prices for it are now 3x what they were back then! Sigh…. the colors on the T version follow the cartoon designs closer, so if you’re going for cartoon accuracy, that’s the version to get. Hopefully one day Fans Toys will reissue the T version down the road.