The turtle’s jaw is articulated.

All of his weapons can be mounted on his beast mode.

Halfshell is the team leader of this merry band of space pirates, Halfshell is usually easily motivated by the prospect of riches, always thinking of the next big score. He is also very loyal and protective of his Seacons team, going above and beyond to save them when they screw up and get into trouble, strange qualities to have for an “evil” Predacon.

The figure is a redeco of Generations Selects Turtler

Halfshell comes with a huge shield.

He also comes with his sword.

The sword can be stowed onto the back of the shield

As usual with combiners, he comes with his combined mode’s oversized rifle.

His shins can be rotated around to reveal peg holes for additional weapon attachment points.

The combined mode’s feet can also be used as weapons.

Lastly, his backpack cannons can also be used in his robot mode.

Weapons can be loaded onto his beast mode.

Oldest of the Seacons, Coelagon loves to spin tall tales of his adventures on the “high seas of space”. The Seacons treat him with a great deal of respect, despite his constant inopportune timing to take naps. Thanks to his age and experience, he usually offers some sage advice to his fellow Seacons.

The figure is a redeco of Generations Selects Gulf/ Skalor.

His tail can transform into a pistol. 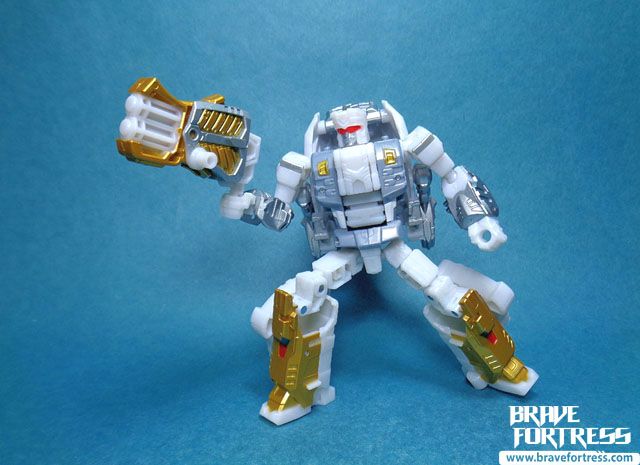 He comes with a sword.

Unfortunately, thanks to the design, he can only hold onto the weapon with the blunt side forward…

While not shown in the manual, you can replicate his weapon mode from Skalor’s manual.

The only female member of the Seacons team and one of the earliest female Decepticons introduced in any Transformers media (if I remember right). Hot-tempered and aggressive, she only has eyes for fellow squid Maximal Scuba (who tries to stay away from her). Complicating this is the fact that fellow Maximal Bighorn is head over heels in love with this Seacon (whom she rejects).

The figure is a heavy retool of Generations Selects Tentakil.

She comes with her twin blasters.

Like the rest of the team, she comes with her melee weapon.

While not shown in the manual, you can replicate her weapon mode from Tentakil’s manual.

All weapons can be loaded onto the beast mode.

Sea Phantom is the team’s brute. Uncultured and always looking for a scrap, he prefers fighting than talking, which usually results in him saying something dumb, like exposing the team’s plan to the Maximals. He’s also a glutton who loves to stuff his face (with Energon?). Sea Phantom is usually in the crow’s nest of the Seacons’ ship, serving as the spotter for the team.

The figure is a redeco of Generations Selects Overbite.

His primary weapon is a large rifle.

Same as Overbite, Sea Phantom comes with a sword as well.

When all else fails, Sea Phantom can always count on his claws to fight his way out of a spot.

While not shown in the manual, you can replicate his weapon mode from Overbite’s manual.

Weapons can be loaded onto the beast mode.

The youngest member of the Seacons team. Brash, lazy and least motivated, Terrormander is the one stuck with the mundane chores on the team’s ship as he’s the “new guy”. He’s usually seen in control of the ship’s steering wheel aboard the bridge.

The figure is a redeco of Generations Selects Kraken/ Seawing

He comes with his rifle for a primary weapon.

Plus the guns on his wingtips can also be hand-held.

All his guns can be combined to form a super weapon.

While not shown in the manual, you can replicate his weapon mode from Seawing’s manual.

Unlike their predecessors in the Japanese TF Masterforce cartoons, the Seacons in the Beast Wars II Anime actually have distinct personalities (they were mostly just characterless drones in Masterforce). 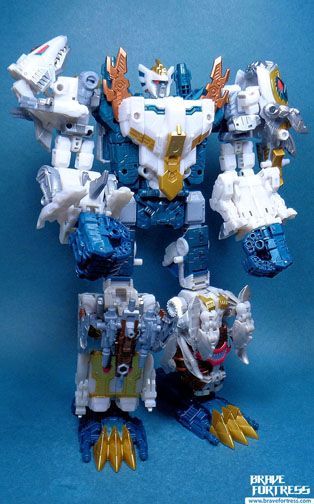 The Seacons team’s “Trump Card”! Extremely powerful with almost no known weakness, the combined form of the Seacons is nearly unstoppable, except for the fact that Scylla, which forms the left leg, can be easily distracted and forced to separate from the combined form if romance with Maximal Scuba is involved.

The figure is a redeco of Generations Selects King Poseidon, sadly, it’s missing the team’s “sixth man”, Nautilator/ Lobclaw, as he was never included in the original Japanese cartoon or toys.

Like his mold-mate King Poseidon, the combined form uses the spare hands as “heels” to help balance the figure.

As a throwback to the vintage toy, you can opt to just use Halfshell’s default cannon as his rifle.

Alternately, all of the Seacon’s weapons can combine to form the Neptune Sword and Neptune Cannon.

Unfortunately, there’s no way for him to hold his cannon up with just one arm due to the lack of any rachet joints on the elbows. It only works with him holding it with two arms. 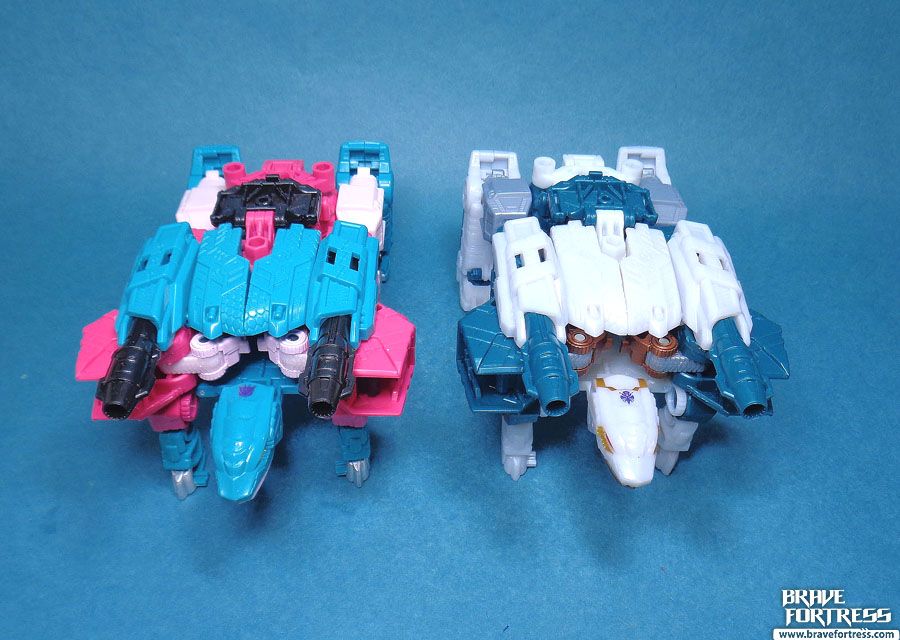 Scylla is the only member of the team that isn’t a fully redecoed figure. She actually has some unique torso and leg sculpt.

Lobclaw/ Nautilator is the only one who doesn’t have a Beast Era Seacons counterpart (it was only a 5-man team).

Overall, an impressive set! It’s too bad we don’t get a redeco of Lobclaw here, but since he never appeared in the Beast Wars Anime, I guess it is what it is. Personally though, I still prefer the King Poseidon colors but this set is still a solid release (relatively more affordable too, as far as the original SRP went for).