Hailing from the Autobot sub-team, the Turbomasters from late in the G1 United Kingdom Transformers mythos, Rotorstorm is the only member of the team that can fly. Highly skilled and fearless, his audio sensors can pick up Decepticon chatter, and as the team’s strategist, predicts their plans. He also possesses a unique ability called a “dodge” sense, which lets him predict and evade incoming attacks and warns him of danger in advance (a la Spider-man’s “Spider Sense”). Respected and feared by even the most hardened Decepticons for his power and speed, Rotorstorm is a force to be reckoned with. 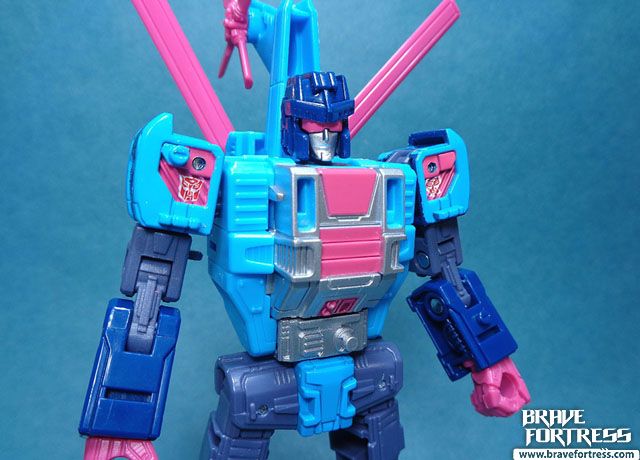 In case you missed it, the figure is a retool of Siege Spinster. Featuring a new head and deco based on his IDW comics appearance.

Just like Siege Spinster, which had an homage to his G1 Targetmaster figure, Rotorstorm’s guns can also combine (sorta).

Overall, I like this guy a LOT! I guess it’s the colors or the new headsculpt. It seems so much better than Spinster and I guess his lean “frame” makes him look really good in a lot of poses.