Based on the Japanese cartoon continuity of the G1 saga, where Galvatron was finally defeated by the Headmaster Autobots and trapped under a mountain of ice in Alaska. He would later be revived in the year 2031 by Dark Nova and given a new powerful body, “Super Megatron”, in the Transformers Battlestars Manga.

The toy is a heavy retool of Titans Return Voyager Class Galvatron.

This marks the first time Super Megatron has ever been made into a toy. As he was introduced at the end of the original Transformers G1 Japanese continuity, with dwindling toy sales, Takara was only focused on making the Autobots based on the Battlestars line, so no Decepticon toys appeared in the toyline.

Despite being killed and reformatted so many times, Megatron still craves power.

He comes with a new Fusion cannon. 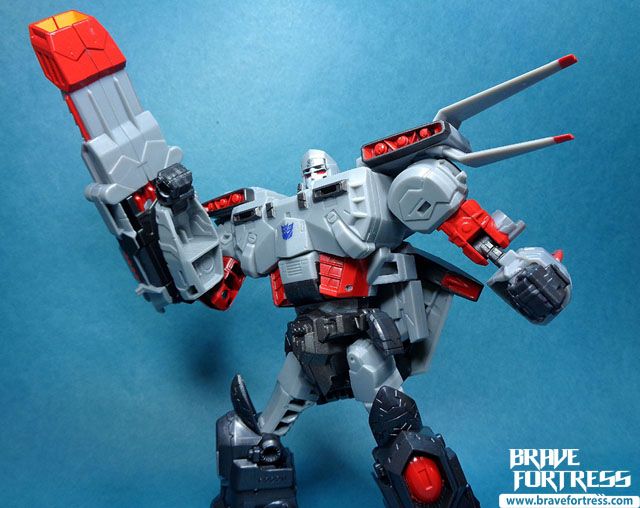 To transform him into his Ultra Megatron Form, just flip his head back and turn his forehead plate around, do note that his forehead is on a different swivel from the face plate.

His Fusion Cannon also changes configuration in his Ultra form

Lastly, you can flip his alternate face around, this is something new for this character based on the Legends comic and was not around during the original Battlestars Manga. This new face is an homage to Megatron’s live-action movie counterpart, with elements of Dark Nova from Battlestars thrown in.

In this form, Megatron is called “Ultra Megatron Omega”.

Ultra Megatron Omega is given this form in the Manga after acquiring Star Convoy’s Silver Matrix. You can actually plug the Silver Matrix from Generations Selects Star Convoy into the figure’s shoulders, to recreate his look when this form first emerged.

With Generations Selects Star Convoy. Surprisingly, they are actually in scale? According to the source material.

Overall, a pretty amazing figure. It’s impressive what Takara was able to work with from the Titans Return Galvatron mold and turn it into this (although the Ultra Tank mode is a bit of a stretch from the original Manga design). While it is in scale with Star Convoy, I really do wish they made him the same size with that figure instead. Still, this is definitely one of the nicer Megatron figures around.