Grand only appeared very briefly in the Masterforce show, most of the time he was either Gran or Grand Maximus when he was onscreen.

Grand’s only accessory is the tip of the Grand Sword.

Grand Maximus was offered only through the Takaratomy Mall online shop, a minimum of 2000 units preorder was needed to produce the toy. A second target was the mini Pretender shell for Gran, which required a 3000 preorder minimum. Sadly, the preorder for that was not reached.

Similar to the Takara version of Fortress Maximus, Brave Maximus has voice clips from the Anime, however they do seemed to be a bit garbled. It also features light up eyes whenever the electronics button is pushed.

Supposedly, Grand Maximus is much smaller than Fortress Maximus, even though they look the same. Fortress can carry several groups of Autobots inside his battleship mode, while Grand can only serve as a “hoverboard” of sorts for God Ginrai.

Hard to imagine what it feels like to be decked by an arm the size of a building, no?

The little artillery cannon on Maximus’ leg can be removed and serve as a vehicle for Gran. 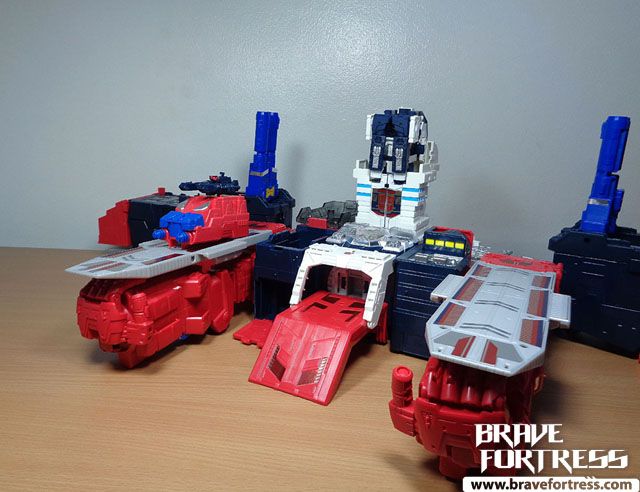 Alternate base mode (legs up).

Personally, I found it harder to connect the sword pieces together this time, compared to how it was on the Fortress Maximus.