lol… even the warning labels are in Cybertronian glyphs.

The package is designed so it can actually be worn as a faux Proton pack, it even comes with straps so you can wear in.

I like how the manual has orange highlights to tell you which part to move to transform, sure beats just two different shades of gray telling you what to do. 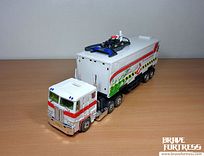 Gotta love the design work on this toy. 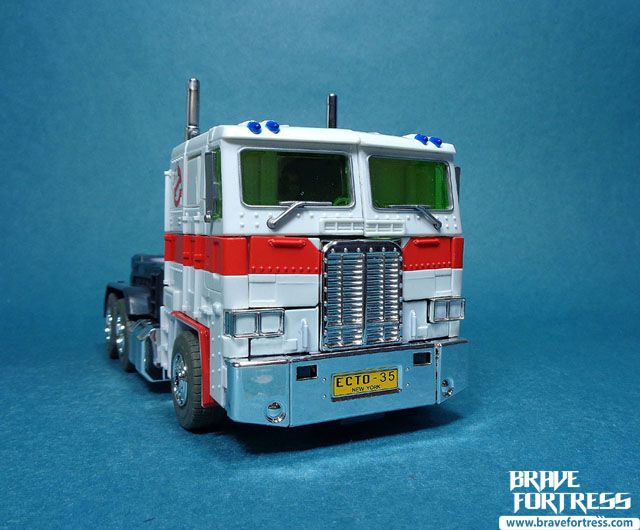 This item was released as a 2019 SDCC exclusive commemorating 35 years of both the Transformers and Ghostbusters franchises. IDW later rolled out a five-issue crossover event comic based on this design as well. The toy was later made available in Asia as a retail release.

Prime still comes with the Matrix of Leadership. Do take note that if you plug the Matrix the wrong way in, the chest panels will NOT close properly, make sure your orientation of the Matrix is correct (smaller gem piece facing outwards).

Given a new paint design to “blend in”, Optimus looks really good in Ecto colors. I just wish they made his eyes blue or green, they just seem so… empty in black. 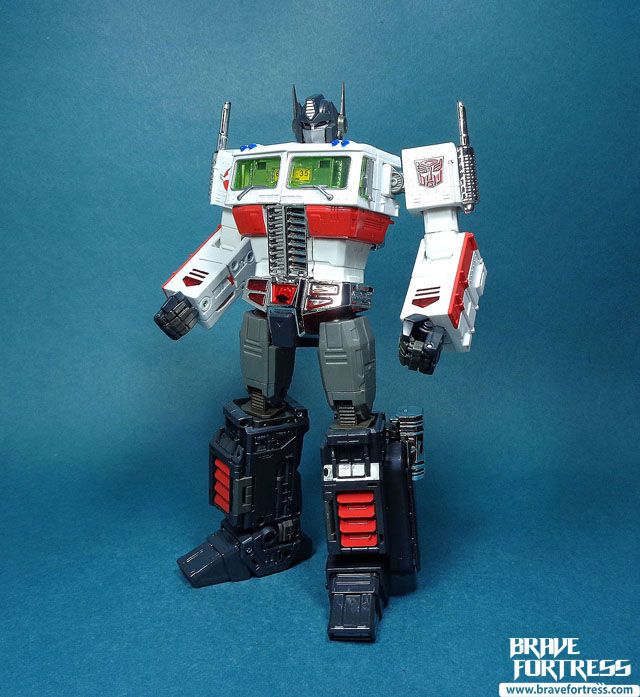 Transforming Prime is really hard this time around due to this section! The button is very hard to press down to release the locks for extending the legs. I never had this issue with the earlier MP-10 molds. Geez…

Same as with the original MP-10, Prime stands roughly 9.5 inches tall and weighs 405 Grams. Diecast parts include his feet and “spine”.

Prime’s Proton Pack is plugged into the roof access of where his turret can pop thru the trailer in the MP-10 version.

Prime’s Proton Pack is actually the same as Ectotron’s, just with less paint and colors and with an added roof rack to facilitate attachment and make it look bigger.

In robot mode, the Proton Pack plugs into Prime’s back via the hole where the Ion Blaster protrudes through when stored.

The Blaster is still the same with the MP-10 version, it just comes with a new attachment so the cables from the Proton Pack can plug in somewhere.

Do note that with the attachment equipped, the Blaster cannot fit into Prime’s back.

Cables from the Proton Pack plug in here: 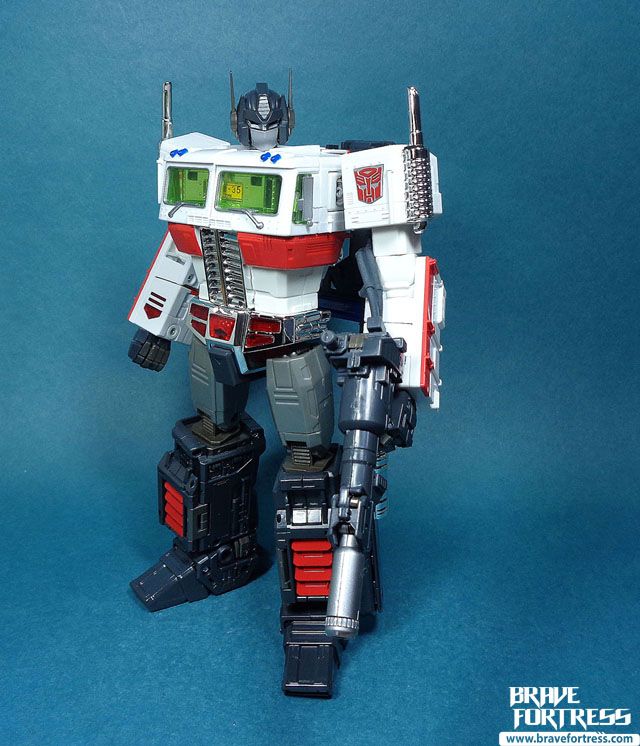 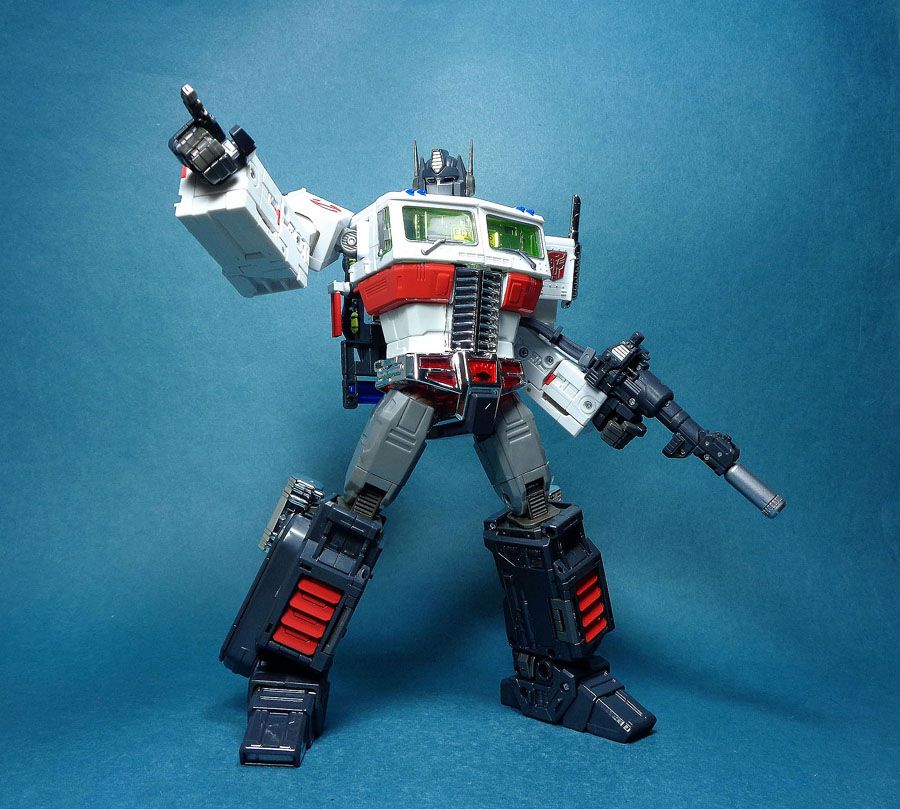 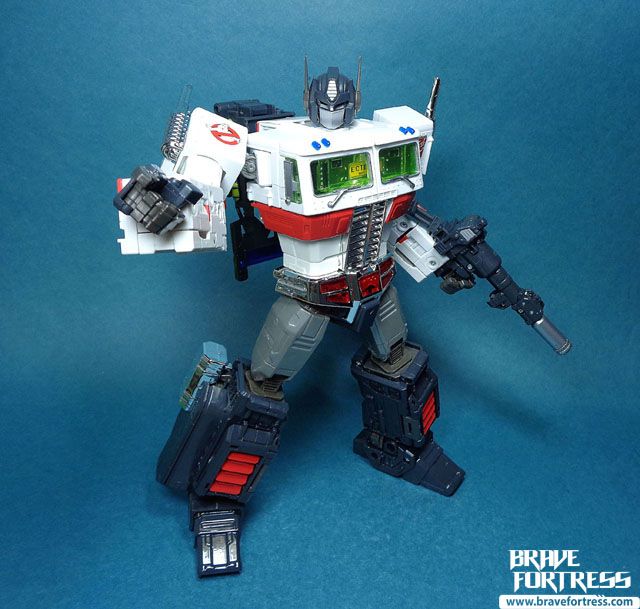 Trailer opens up to become “Ecto-Base”

The chairs can be folded up or down.

Panel covers can be folded up to cover the port for the Proton Pack, but it’s black-colored plastic, folding it up will stick out like a sore thumb on the white-colored trailer.

Just like on the MP-10 and other Prime Trailers, the cannon array can be made to poke out of the roof top for battle mode. 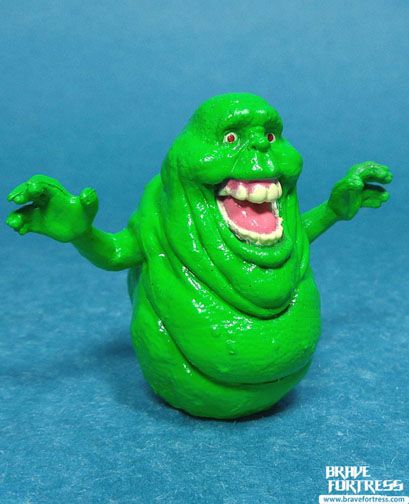 Slimer is still the same figure mold that came with Ectotron, but this time with actual paint applications. The figure still feels rubbery though. 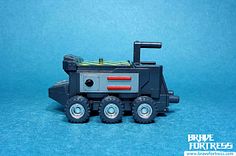 Roller is redesigned to look like a Ghost Trap, the “trap” portion is actually just an add-on, it’s still the same MP-10 Roller underneath.

The Ghost Trap’s “doors” don’t open though, it’s a solid piece with no hinges. there is a plug for Slimer to attach to on the top.

Roller features the same bells and whistles as the original MP-10 Roller, including the flip out rear section for connecting to the Trailer or holding Prime’s rifle. It’s also still a “single seater” unit, unlike the MP-44 Roller. 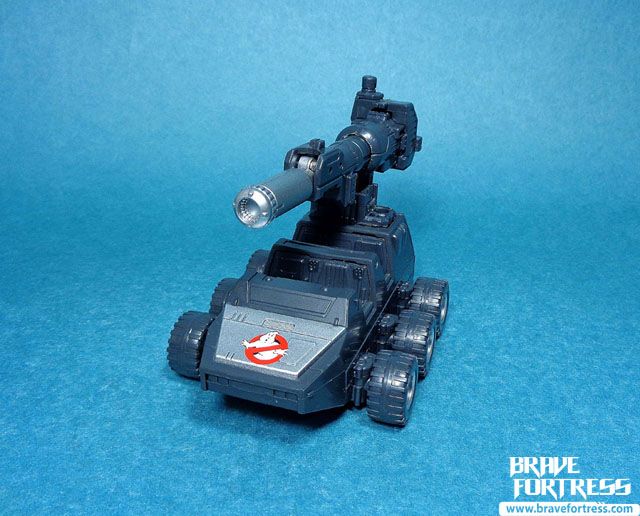 Roller can dock with the trailer for mobile battle mode.

Roller can also dock into the Ecto-Base, but there are no attachments to secure him in place.

Ectotron can’t really inside Prime’s trailer, you can cheat a bit but it needs to remove the roof attachment first.

Certain obstructions inside the trailer also prevent Ectotron from going all the way inside when the trailer is closed.

But, once the trailer is opened up all the way, the black obstructions get out of the way and you can park Ectotron all the way in. 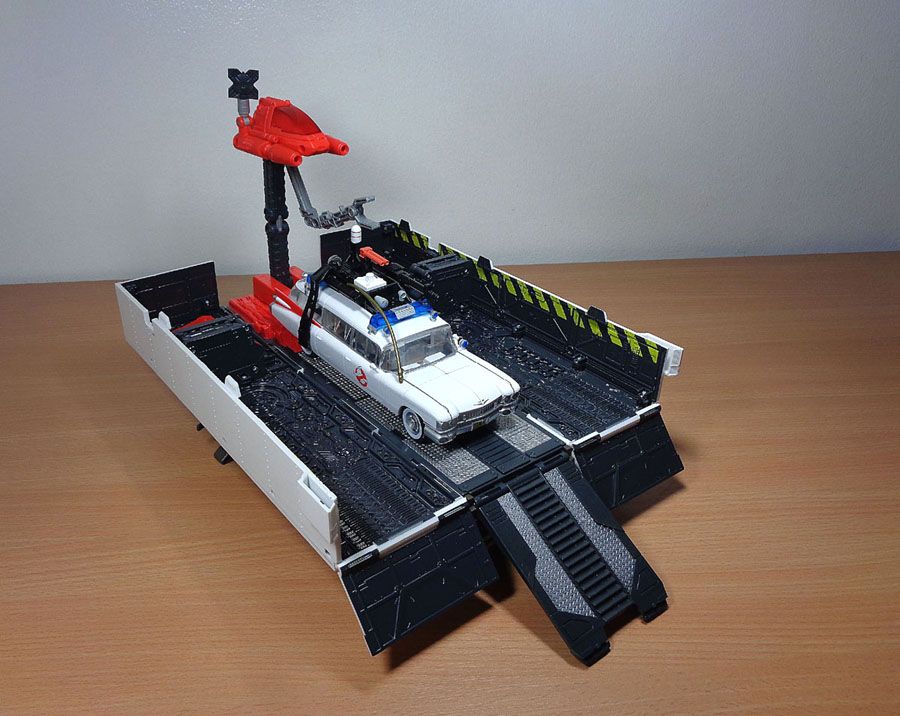 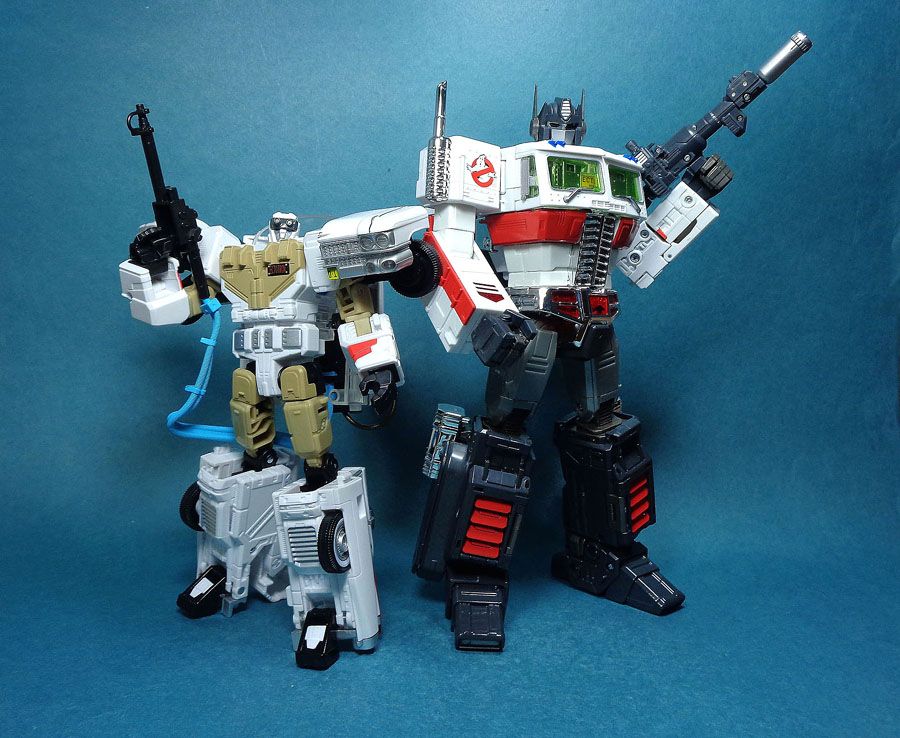 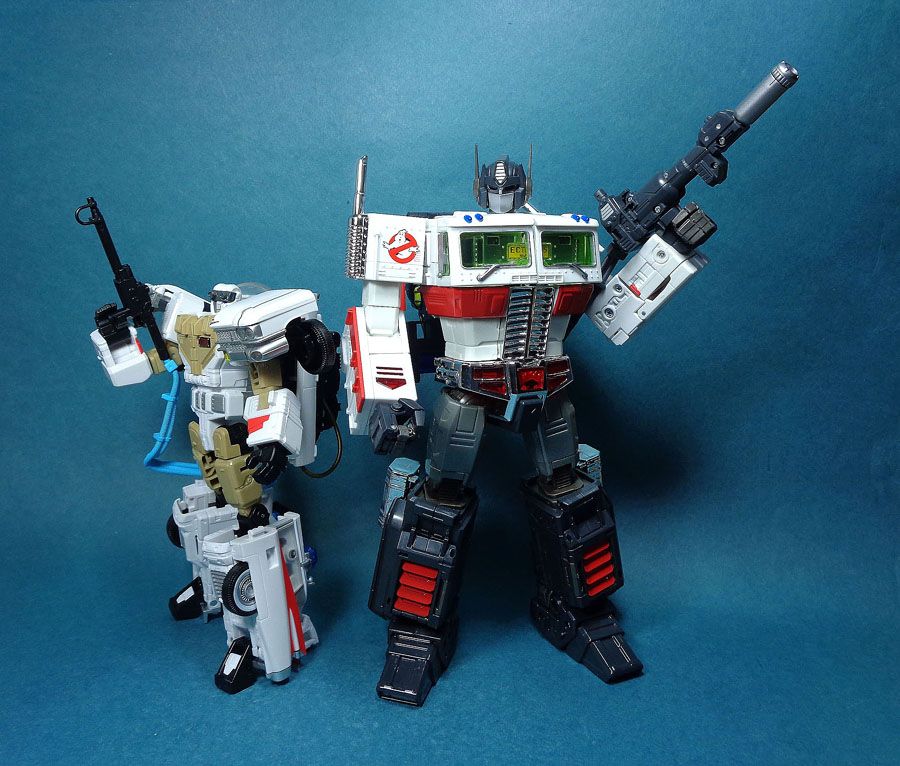 Overall, a truly amazing set! It’s too bad it doesn’t come with Prime’s Energon Axe, or a properly scaled Ghostbuster figure (there’s indication that there was at least a human figure meant to be included based on the manual?). The figure looks very good (good call on using the chrome parts for Prime’s waist) and works well with the Ghostbusters motif. I love how they reworked the Proton Pack from Ectotron for Prime. Really cleverly done. The best part about this is that it was made available at local retail despite being originally an SDCC Exclusive release. I was able to get this without having to pay crazy Ebay SDCC prices! 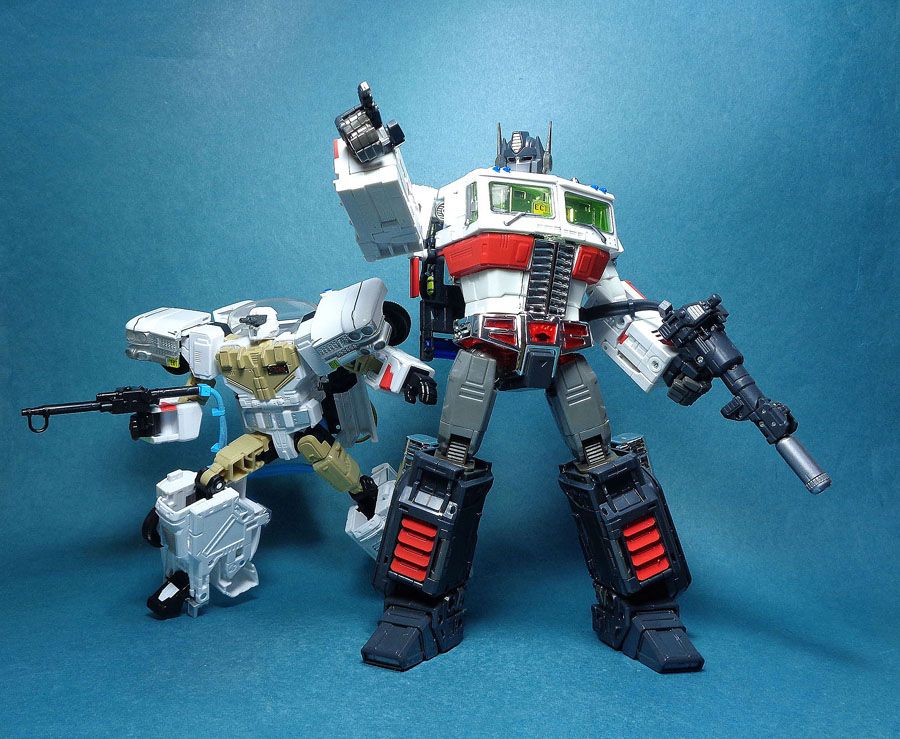