Lol… admittedly, I didn’t notice it at first, but my Carly came misassembled, her mid-torso section is reversed, with her butt facing front. I only noticed this while going through my photos. I’ll have to reassemble her right.

All the humans have magnets on their backs (except Carly) and on their feet and stand roughly 1.5 inches tall.

They can also ride inside Prime in cab mode thanks to the opening doors.

Heh, I don’t know, I am so used to seeing the Autobot logo embossed on the side of the trailer, this is kind of big change for me.

Accessory storage tray can be pulled out from under the Trailer.

There are some specific placement positions here for the accessories thanks to the pre-set grooves of the tray.

Roller’s front hood can be opened to reveal the engine.

Humans can ride inside roller.

Roller’s “spoiler” can be flipped to reveal connection ports for various uses.

With the ports out, Roller can be equipped with Prime’s rifle (never happened in the cartoons).

He can also carry the fuel pumps (both pump and nozzle each occupy a slot).

Alternate configuration for the fuel pump setup (the pump and nozzle are combined together and occupies only one connection slot).

From the “More than Meets the Eye” final battle scene.

The Special Anti-Aircraft Guns can also be removed from the Control Tower array and placed on Roller for more mobility. While this was never shown in the cartoons, it is an interesting concept, to say the least.

As another concept not shown in the cartoons, Roller can also tow the Control Tower Array like a mini-trailer.

Flip out the side stabilizers first to support the “wings” of the trailer panels.

To lock down the Special Anti-Aircraft Guns platform, remember to flip out these panels.

Human partners can stand on the tracked surfaces which has some metal for them to stick onto thanks to the magnets.

Likewise, Spike and company can sit in the consoles in the Combat Deck.

Roller can also be used to tow the Trailer around with the Special Anti-aircraft guns deployed.

When they released the MP-10 waaay back when, I said to myself, this is it! This is the best MP Prime Takara can cook up. Flash forward to 2019, Takara took it several steps further! The figure looks amazing!! It’s like Prime came right out of the TV screen. Plus it’s insanely poseable too!

The fingers on the hands are articulated. I think I prefer the design here compared to the usual Masterpiece hands.

The index fingers have extra joints, so you can pose Prime pointing out.

Hmmm… so tempting to squeeze…..

MP-44 Optimus has an insane amount of articulation compared to his earlier MP versions, double jointed elbows and knees, plus an ab crunch joint, plus butterfly shoulder joints!!! This thing is amazing!

To get Prime’s second knee to work, the best way is to guide this peg (marked green) and make sure it folds into the canal (marked red). If it doesn’t fold into the canal, that misaligns the knee assembly and you’re going to have a whole lot of problems (i.e. you have to take apart the whole knee assembly to fix it). Best to be safe than sorry.

Credits to Emgo over on Youtube for showing folks how it’s supposed to be done.

The skirt plate folds up when you move Prime’s leg up. So cool!

Thanks to the new joints, MP Prime can finally do kneeling poses.

The Laser Rifle can also be folded up and stored in vehicle mode or, in robot mode.

The effects parts from the Rocket Pack can be attached to the rifle for a “firing” effect.

The connection for the Energy Axe seems awkward. There doesn’t seem to be a clicking lock to secure the connection properly? I’m not sure if I’m doing it wrong. But it does look cool. Way better than how it looks on the MP-10.

The Matrix is a bit too small for Prime told, you can only hook it on his index fingers. From what I understand this is a reuse of the MP-10 Matrix? I didn’t have time to do a proper comparison. But it is made of diecast metal.

IMPORTANT NOTE!!!
Take care when opening and closing Prime’s chest, as the panels tend to scrape the chrome on Prime’s abdomen plate. I scuffed mine a lot before I noticed what was happening. Sigh… Just be sure to lift the panels before swinging them outwards or inwards.

Alternated “round head” and “damaged head”, the round head is based on Prime’s appearance in certain Season 1 episodes, it’s also how Prime looks in the early Marvel Comics issues. The default head attached to the toy follows his later seasons and movie design head.

This part is actually just clipped onto Prime’s waist, at first I thought it needed to be swapped out, good thing it’s not that complicated.

The damaged parts are meant to recreate Optimus’ battle worn look from his final battle with Megatron in the 1986 animated movie.

Starscream parts (from the Episode “Megatron’s Master Plan”, where Starscream and the other Decepticons are disguised to frame the Autobots)

I love how they even decided to put Starscream’s intake pads to “complete the look”.

Prime Borrowed this from Sideswipe in a last ditch attempt to stop the Decepticons from returning to Cybertron in the 3rd of part “More than Meets the Eye”.

Removing the Anti-aircraft guns from the base will make the base available for the “flight mode” display.

This is supposed to be the locking mechanism for the arm, but it does NOT work right and easily unlocks. resulting in a risky flight pose for Prime. I don’t know whether to blame poor design or poor factory quality control, as this seems to be a common problem with all MP-44s

After some effort, I managed to get Prime posed right for the flight mode, but I don’t really recommend leaving him like this for long.

I managed to get some support for the figure by posing the leg against the base of the platform.

Effects parts are included for the Rocket Pack

If you really must pose Optimus in flight mode, it is recommended that you use the base that comes with the MP Dinobot, as this is sturdier. The MP-44 comes with an adapter plug for it, too.

Rocket Booster can also be equipped on the trailer (concept idea, never happened in the show). You just need to fold the peg out from the pack.

You can also attach the Rocket Pack onto Masterpiece Sideswipe. Unfortunately, there’s no actual locking mechanism though, so the whole thing just kinda hangs on his back (I think? The manual never really mentioned this gimmick so I just went with what I could figure out). Also, the shade of red on the pack matches MP-12+ toon colors version Sideswipe better than the old MP-12 regular.

Even though the pack is big, you can hardly make it out from the front and angled shots, mostly due to Sideswipe’s wide chest I guess?

I tried using the peg for attaching the rocket pack to the trailer onto Sideswipe, but it wouldn’t fit. I think the shape of the peg is too different? I didn’t want to force the connection, especially since I was pressing down on the clear plastic windshield whenever I was pushing the connections into the port. Oh well.

Getting to the English audio tracks
There are 5 groups of recorded audio clips, four groups of Japanese audio (TV and movie dialogue clips) and one group of English audio featuring Peter Cullen’s voice (just 3 phrases though), for a whooping total of 50 audio phrases in this toy. To shift from mode to mode and to get to the English phrases mode, just hold down the button until you hear the “Transformation sound”, signaling that the audio group has changed to the next sequence.

One of the complaints about this toy was the bulky backpack. This is mostly due to the electronics module being located here. I kinda wish they put it somewhere separately, like maybe a display base? I would’ve liked that instead of a bulky backpack.

Maintenance Dock mode for the trailer.

Fuel pumps and Laser Rifle can be mounted on the side pockets.

The consoles can be flipped down to serve as platforms and the humans can be posed here as well thanks to the magnets and metal surfaces.

There’s also another set of tracked metal surface on the reverse side of the tailgate for the humans to stand on as well.

You crazy humans better not mess up my maintenance.

Lastly, for the trailer, a new concept mode is also introduced here, the Tower mode. Not bad I guess. Certainly adds more play value to the trailer. 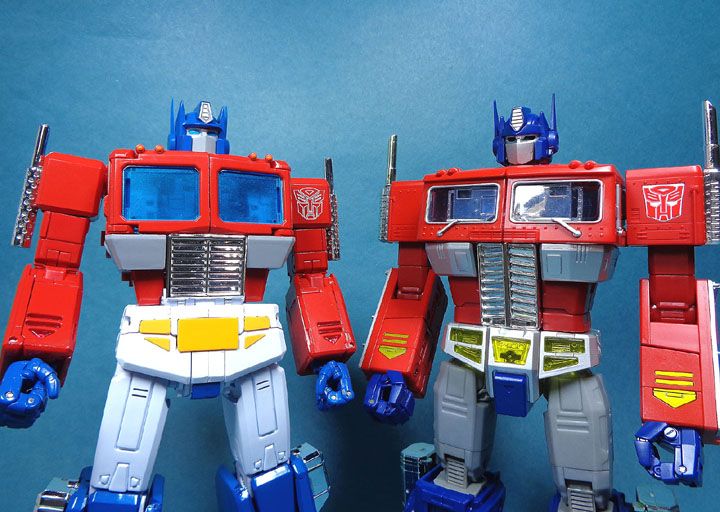 Spike Comparison
I think I still prefer the MP-10 Spike, as this new version is too thin, not to mention he comes apart waaaaay too easily, it’s annoying.

Diecast parts include:
–Main “spine” of the figure (lol… that was the only part that I could feel that was metal. I could be wrong)
–Tracked parts of the trailer for the humans to stand on.
–Flipped console platforms inside the trailer (during Maintenance Dock mode)

Overall, I think Takara did an incredible job! The sheer amount of details kept me working on this toy for hours! I thoroughly enjoyed every minute of handling this crazy thing! It’s fun to pose since it has so much to offer in terms of articulation!

With so much stuff included, the complexity of the engineering, I can see why they charged such a high premium for this release (I do wish they added more metal to it). With the exception of the upcoming Unicron toy, the MP-44 is the most expensive, non-exclusive, mass retail Transformer figure ever released.

There are some downsides, I wished they kept the knee articulation simpler. As is, it is very scary to manipulate the second/ lower knee joint for fear of breaking the joint, based on all the horror stories that you hear about the joint suffering damage from mis-aligned movement. If in doubt, then just don’t use the lower knee joint. The main knee joint is good enough on its own.

Also, the quality control is not what one would expect, especially since we are paying at such a high premium for their Masterpiece figures. I didn’t encounter major problems on my unit, but there have been reports of paint problems and warped helmet antennae on some figures. Takara seriously needs to improve its quality control.

Still, I think this is a very good figure and it shows, just put him next to the MP-10 and the other MP Autobots and it totally makes the MP-10 look out of place now. I will try to get another unit down the line if I can, as this is one of the great ones for me design-wise (your mileage may vary), the kind that we won’t likely get again for long, long time.

Instead of the usual coin or pewter mini-stat, this time we’re getting a pin for the Asia Market exclusive bonus item.