The set comes with an optional “string and anchor” piece called the “poison anchor” that allows you to set the spider mode like it was coming down from a web line. Pretty neat.

The spider mode’s mandibles can be opened and closed.

Once a Protoform Maximal, Blackarachnia was reformatted by the Predacons to join their cause. She eventually joins the Maximals again thanks to the heroic Silverbolt’s chivalrous actions and romantic feelings for her (that and she did betray the Predacons for selfish reasons on several occassions).

Be careful when handling her spider legs though, they tend to be fragile and there have been reports of breakage due to careless mishandling of the figure.

The set comes with the “smirking” face equipped by default and an optional “neutral face” included on the tray. The differences are very subtle so you you’ll really have to look at the figure’s lips to tell which is which. 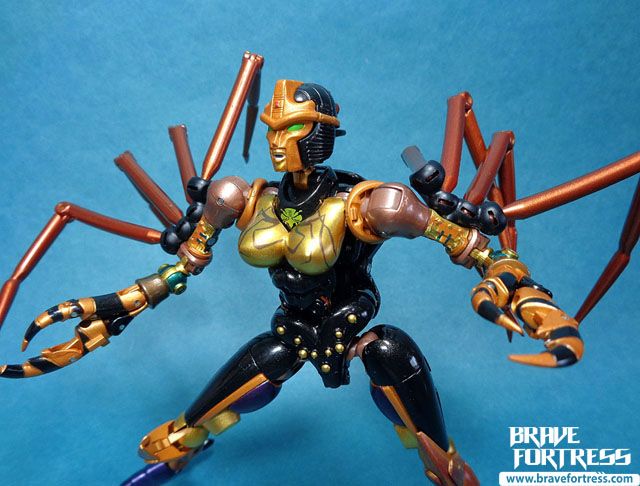 She comes with her Anchor Missile gun.

I don’t know if it’s just my unit, but getting the anchor in and out of the gun’s muzzle was a huge pain, I think the silver paint on the missile was too thick on my copy?

Lastly, she comes with her visor, from the episode “The Other Voices part 2”. She uses the visor to plug into the brain of the recently destroyed Tarantulas in order to retrieve data tracks on how to repurpose a stasis pod to escape the destruction of the planet by the Vok. The pod would later be used instead by Optimus Primal to travel to and detonate the Planet Buster.

The visor comes with spare cable in case you break the default one (sorry, I forgot to take a photo of it).

The set comes with a display base so you can pose her webs.

The web parts connect to the base via this attachment.

Be careful when plugging this clip into the post. It’s a bit hard to pull back out. I had to use pliers and wrap the clip with a cloth to pull it free in order to return to storage.

To get the spider mode to clip onto the base, you have to first peg the Anchor missile onto the bottom of the spider and then clip it onto the blue clip attachment on the base.

For the life of me, I could not get this to work, the Anchor missile would always fall off the spider somehow. It’s not easy. Fortunately, you can adjust the angle of the web a bit, and thanks to the figure’s spindly legs, it can be posed on the web even without the clip, no problem.

The figure plugs into the base directly easily enough in robot mode though, no need for the blue attachments.

Overall, a decent Masterpiece figure. She’s very light though but the good news is, the joints are tight and she has no trouble standing or pulling off excellent poses. The design and details make her a fine addition to the Beast Wars MP figures. The only real downside is that the spider mode is a bit of a pain to work with if you don’t have all the pegs locked down properly. It’s also a pain to connect the figure to the display base the way they intended it to in spider mode. The robot mode is where this figure really shines.