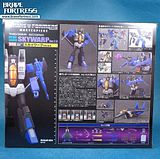 I’m glad Takara still does this on the back of their larger MP boxes, a 1:1 representation of the figure’s actual size in robot mode. 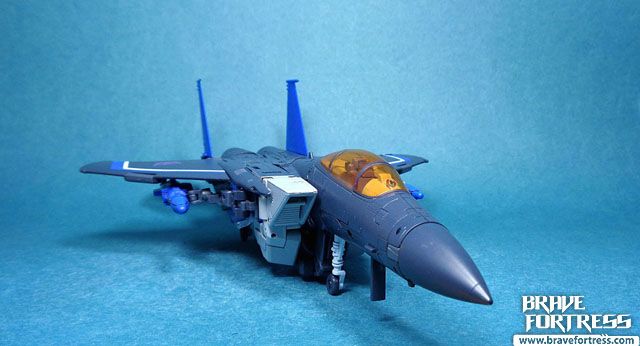 As usual with this mold, the guns can be flipped around to reveal the “missile” modes for the jet mode. 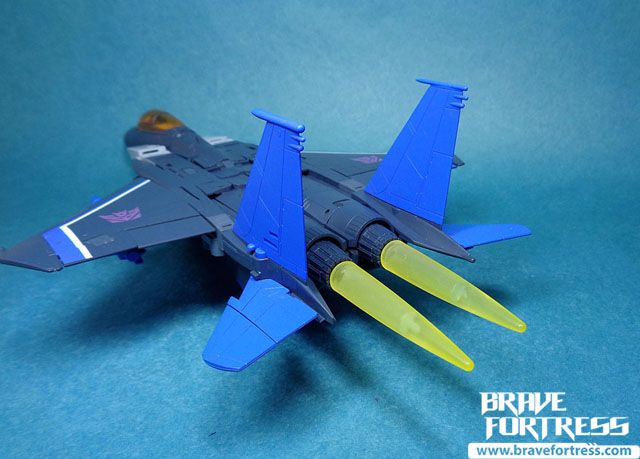 Control panel detail (not much there, really). 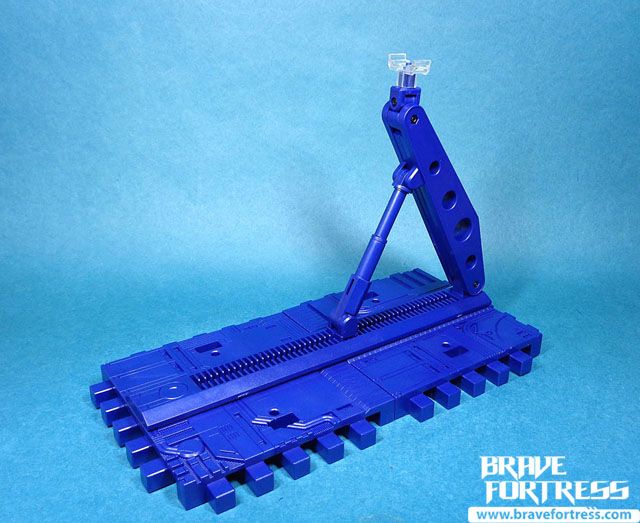 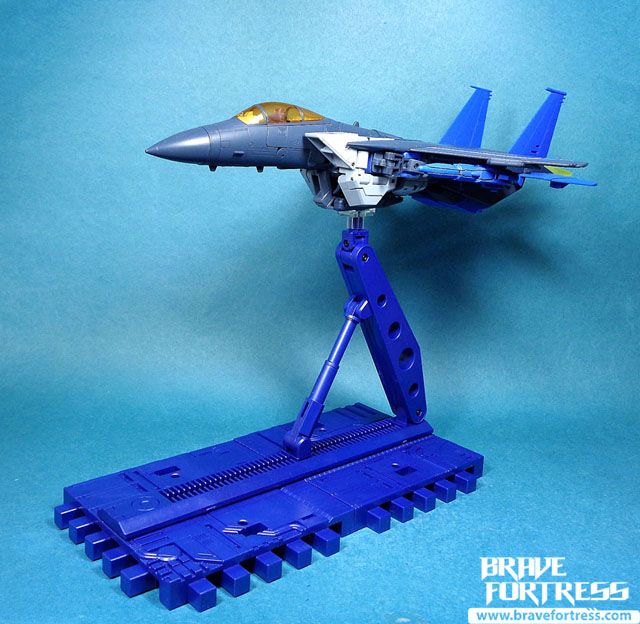 Thanks to the adjustable arm and hinged joints, you can pose the jet mode in various heights and angles.

You can also plug the Megatron Gun mode into Skywarp’s underside, but it will not fit into the display base’s attachment with it equipped, sadly. 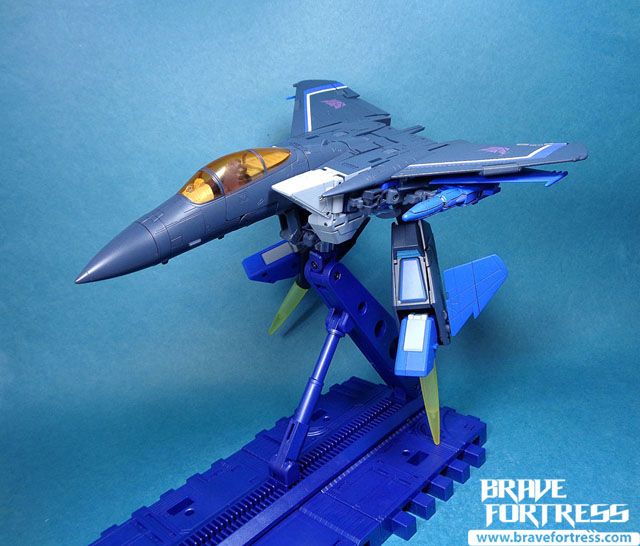 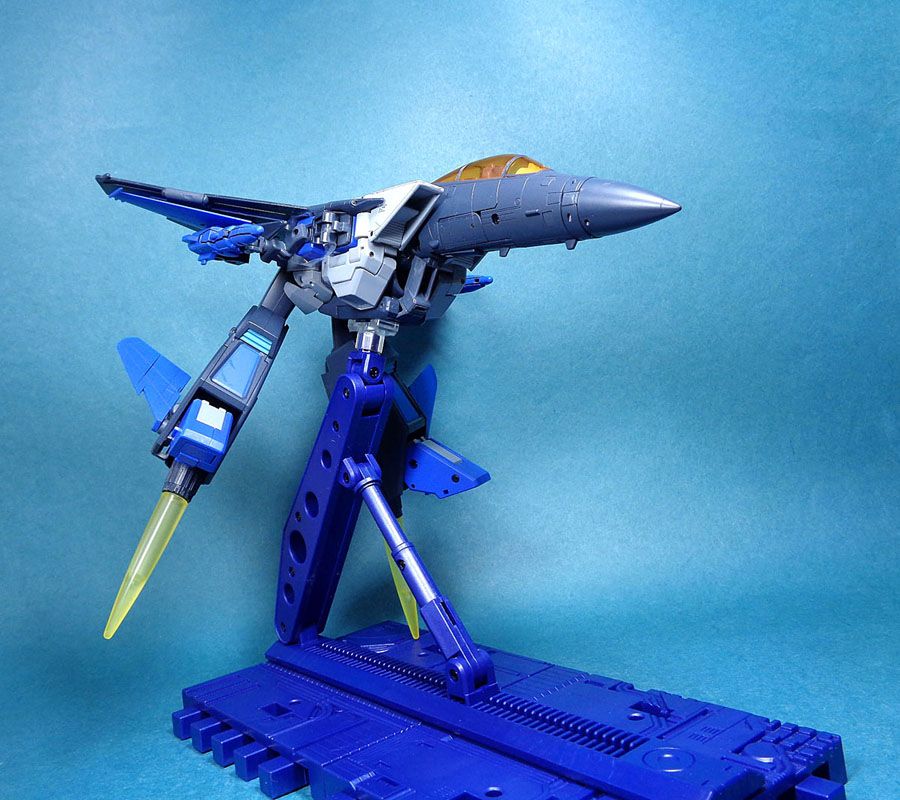 The only Decepticon with the unique ability to instantly teleport to distances of up to 2.5 miles away, Skywarp’s technique would be truly impressive, if only he knew how to use it strategically. Without direct orders from Megatron, Skywarp only uses his ability to play stupid pranks on his fellow Decepticons or attack Autobots without any real accomplished objectives, completely wasting his talents.

Skywarp is a straight up redeco of MP-52 Starscream and Thundercracker.

Thanks to the new design for this figure, he’s now capable of doing ab crunches, just like the rest of the MP-52 Seekers.

For facial expressions, Skywarp has the same extra face plates as Thundercracker, with a slightly darker color tone.

Armaments-wise, Skywarp comes with forearm-mounted Beam Cannons which can also be used as a Variable-Caliber Machine Guns. Three different effects parts can be plugged into the guns. 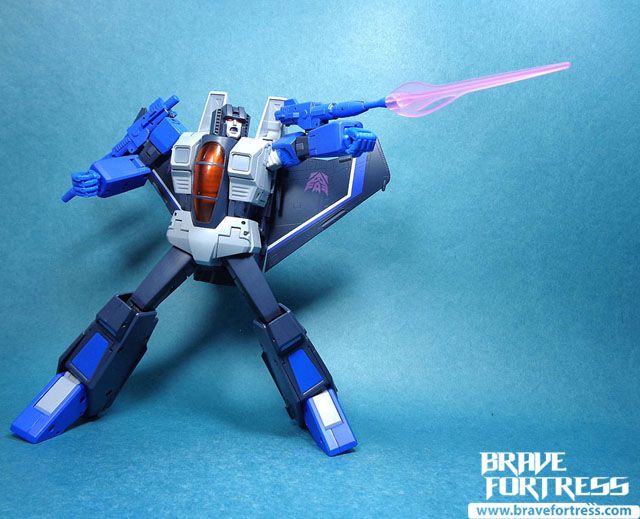 Just like the rest of the MP-52 mold Seekers, you can also remove the forearm-mounted guns and re-equip them as regular handheld weapons. 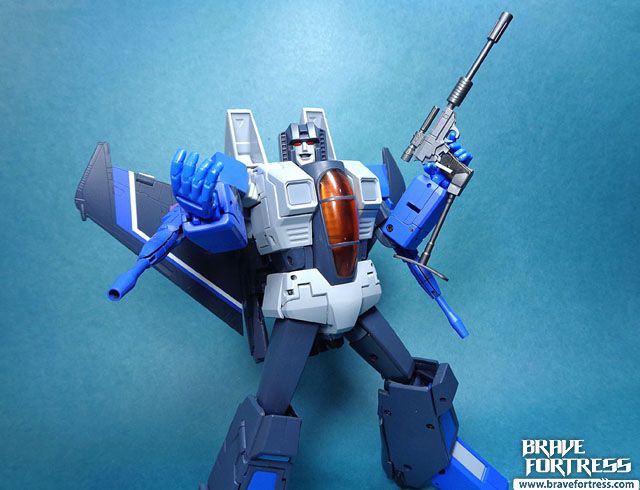 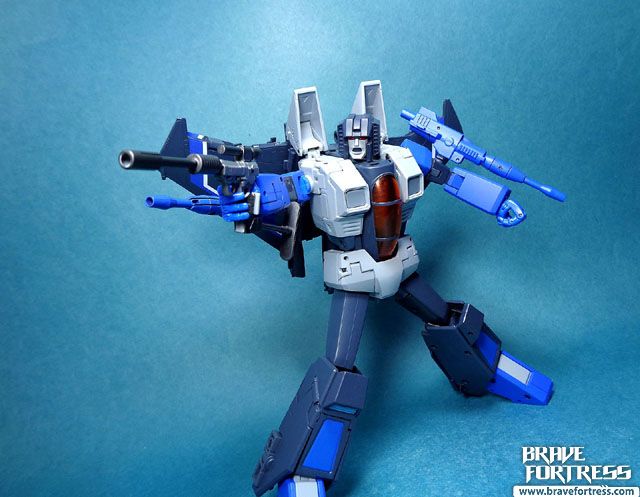 Thanks to impressive addition of butterfly shoulder joints on this mold, you can have Skywarp hold Megatron Gun mode with both hands.

You can also opt to pose Skywarp on the display base, but, unfortunately. it doesn’t have the proper height to give him any really good poses.

I guess it does make him sorta quake-proof though.

With the other MP-52 mold Seekers 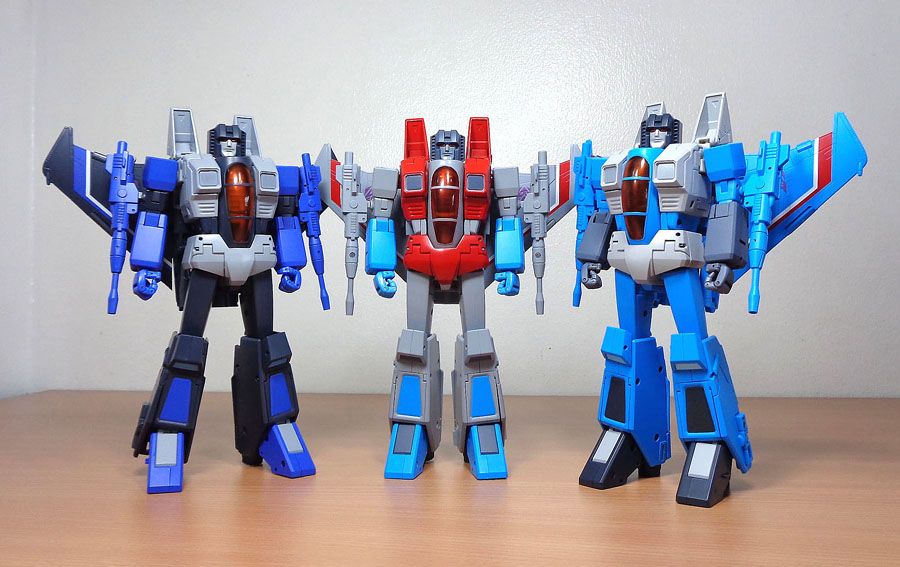 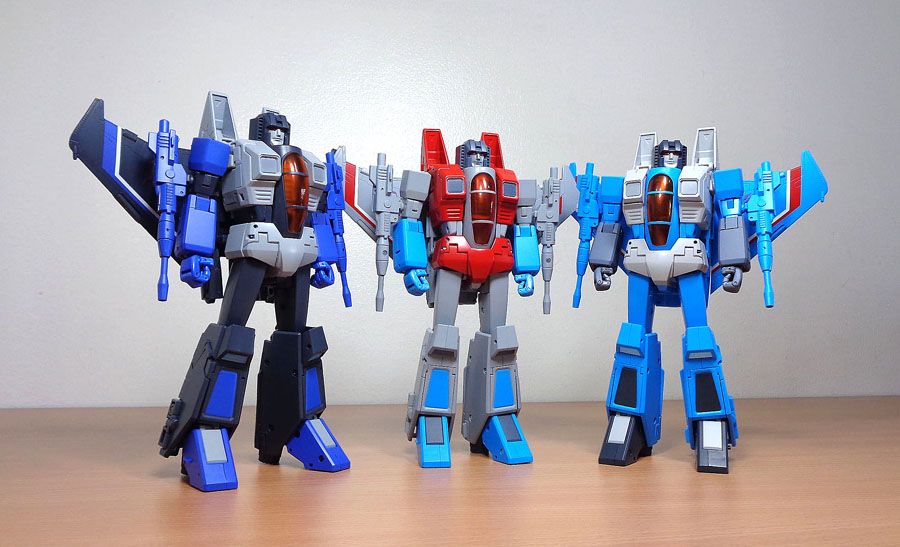 Skywarp has the lightest color clear plastic as far as effects parts go.

By mixing and matching parts, now we can finally have symmetrical effects parts assigned to each Seeker (one seeker comes with only one piece per type of effects parts). 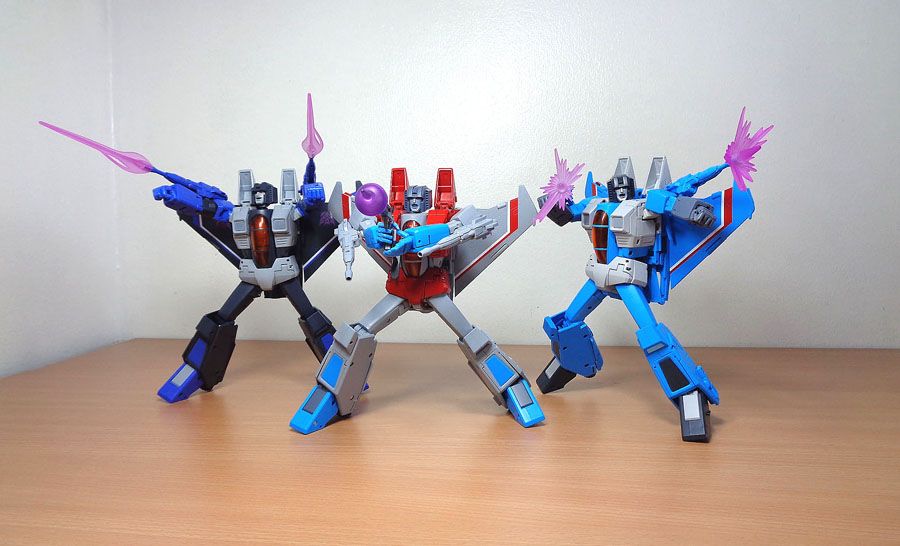 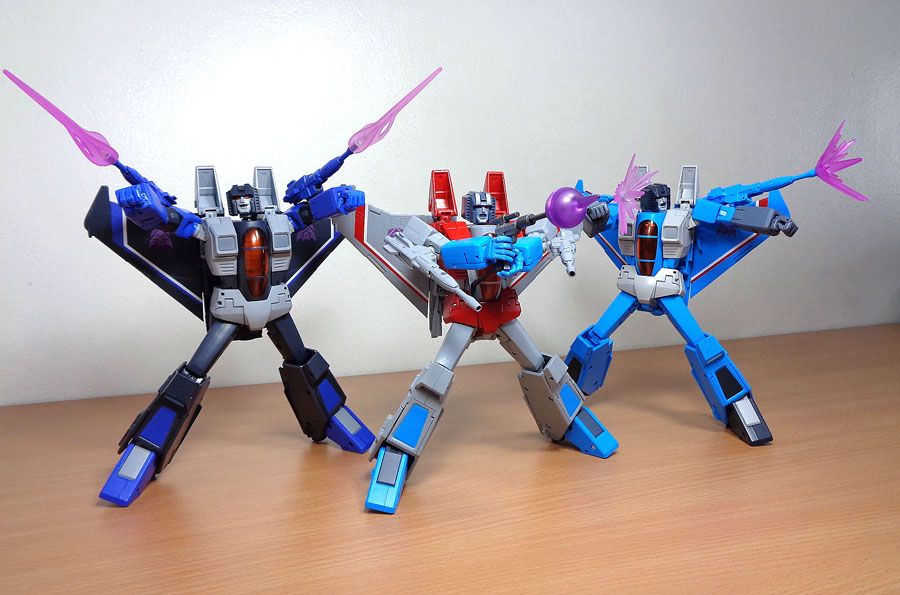 Lastly, just a reminder, because it’s somewhat a long process to transform this mold and thanks to all the crazy empty space underneath the tray, you can actually store Skywarp in robot mode like so, for faster access for group shots. 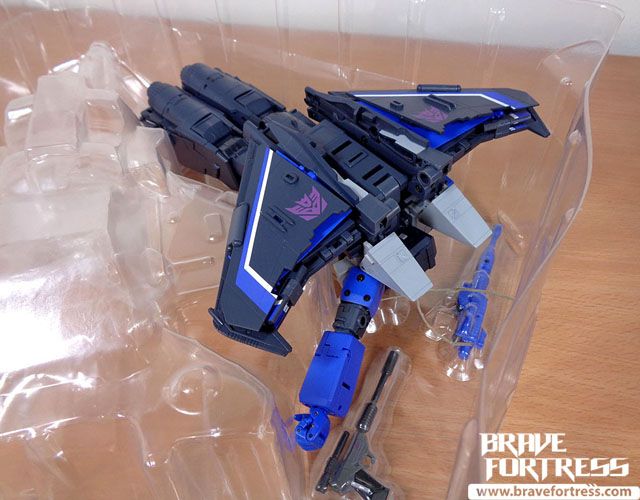 The same applies to all the Seekers.

Overall, I am so glad we finally completed the main three upgraded Seekers for the MP line. This new mold totally blows the older versions out of the water! It’s highly poseable, has more details and even has the crazy “Gerwalk” mode as seen in the Episode “Dinobot Island”. I will probably leave the previous molds in jet mode and pretend they’re other Decepticon goons, just to “fill the skies” if I ever get around to making an MP diorama. Thankfully, this set does not have any QC issues that were a hit or miss problem with the MP-52 Starscream (cracked wing posts in the rear wings).

I have no idea how I’m going to get the coronation kit for this mold’s Starscream, as it was only offered as a Takara Tomy Mall online exclusive if you complete all 3 Seekers in Japan and nowhere else.

Hmm.. I wonder if they’ll release more decos of Seekers in this mold later on?