Front hood opens up to reveal the engine.

The doors can be swung open and the hatchback can also open up.

Skids’ weapons can be loaded onto the hatchback trunk, unfortunately, there’s nowhere to peg the Liquid Nitrogen Blaster, so it’s just kinda thrown in, giving it has a tendency to rattle around.

Transforming Skids back into vehicle form can be a bit confusing, particularly with regards to his arms. Note the orientation here to get it right.

Skids is the Autobot team’s Theoretician, someone who poses theoretical solutions to problems rather than practical ones (basically, one who thinks outside the box). He spends most of his time daydreaming and pondering life instead of helping fight off the Decepticons. In the G1 cartoons he appeared in only two episodes, easily the least popular Autobot among the original cast for G1 Transformers fans.

This Masterpiece figure was designed in collaboration with Honda Motors to celebrate the 40th Anniversary of the Honda City R.

To get the hood to totally land flush, you’ll have to push the hood down hard, you’ll hear a click that means that it has locked into place. I missed this in the first go around with this figure, so you’ll notice most of my images don’t have the hood piece properly down flush.
https://hosting.photobucket.com/images/v463/Goldgaigar/MP53_Skids45.jpg

Twin Electron Blaster mounted on his left arm can shoot out 20,000 volts of electricity, disabling his enemies.

Savant comes with a Motocampo scooter while MP Skids does not. 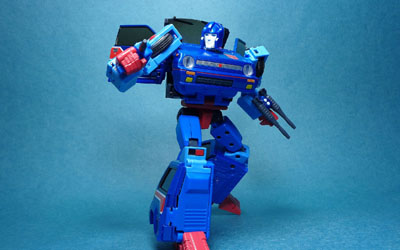 Overall, pretty decent. While I do like some aspects of this figure, the lack of optional facial expression plates that we’ve come accustomed to with more recent MP releases is a bit of a bummer. Also, for some reason, Takara decided to drop cartoon accuracy when it came to Skids’ shoulders (XTB’s Savant nailed this way better by a mile).

I think given the choice, I’d probably go with the Takara Skids, since it looks better proportions-wise. The transformation is also a bit smoother and more intuitive than Savant, but either figure is still pretty good on its own. If you’re going for better show accuracy, then Savant is the winner in that regard.