As an extra feature, you can plug in her big swords, along with her sais, and give her “wings” for her vehicle mode to enable flight capabilities. This mode is called the “Flying Squirrel” mode.

Created by the Earth scientist Doctor Fujiyama, Nightbird was intended to showcase how far along human technology had progressed. She is stolen by the Decepticons, given an evil brain chip by the Insecticon, Bombshell and proceeds to work for the Decepticons until she is eventually captured by the Autobots and put into cold storage by Doctor Fujiyama.

The figure is a redeco of Masterpiece MP-51 Arcee with a new head sculpt.

Just like MP Arcee, her feet are diecast, to properly balance out the heavy backpack.

Her mask is removable, revealing a stern-looking face underneath.

Because Takara can get silly sometimes, they also included her “cute” face from the alternate Legends Universe Comics, where she was an office employee of Tera-Kura Co. (a regular, everyday Japanese company, managed by the Beast War Predacons).

Lastly, for even more zaniness, the manual and box specifically indicate that you can recreate her Swan “alt mode” from the Legends Universe Comics. She supposedly learned this utterly useless “mode” after training with members of the Six Clan (the group that taught Six Shot and Great Shot). Lol.. Oh, Takara…

For weaponry. Nightbird usually appears with her sais mounted on her forearms.

Throughout the G1 episode, Nightbird is shown to be incredibly agile and capable of martial arts moves, like an actual ninja. 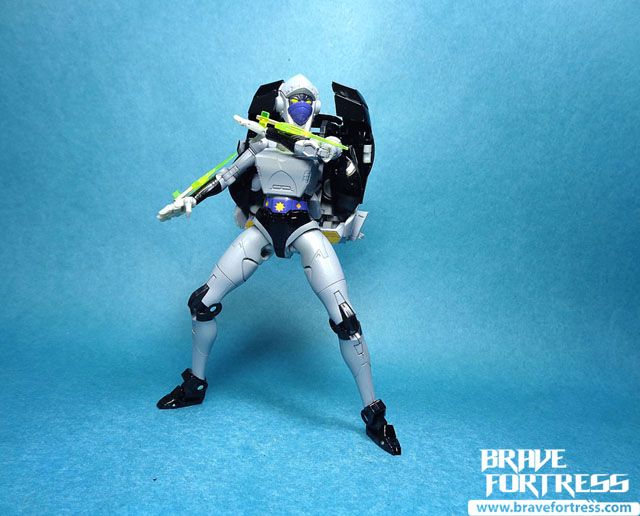 Her sais can be removed from here forearms and equipped.

She also comes with shuriken accessories that can be pegged into her palms.

Just like in the episode “Enter the Nightbird”, Nightbird has light sabers that she can use as well.

As a bonus, Takara threw in the two pistols that came with MP-51 Arcee.

Even the effects parts were included. A holster for the larger pistol is also included in this set, it can be pegged onto her right thigh.

The effects parts for her pistols can also be pegged into the hilts of her light sabers, to be used as forearm mounted blasters.

The swords can be pegged into the sides of her backpack.

Overall, a pretty good Masterpiece figure. The design of the slightly stylized robot mode actually works better here than on Arcee. The lowered chest piece doesn’t bother me as much, nor does the backpack. I guess the darker colors mask the effect and the general aesthetics of the toy do match the G1 animation models close enough (minus the backpack).

I really like the amount of weapons included with this figure, too, but I do wish Takara included the nunchucks that were a part of Nightbird’s standard arsenal from the cartoons as well. I think she’ll go really well alongside other G1 Decepticons in any display, thanks mainly to her color scheme.