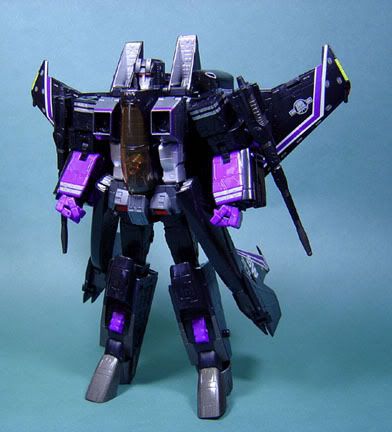 Simply a repaint of Mp03 Starscream with a new alternate head, this one has all the accessories that came with the Mp03 (including the unpainted Dr.Arkeville figure.)

Chest missiles -though never used by Skywarp in the show (Starscream only used them once), I guess they included this feature since it was already there.

According to the G1 bio, Skywarp’s weapons include heat-seeking missiles and variable-caliber machine guns. His deadliest weapon is most likely his ability to teleport anywhere within a distance of 2.5 Miles.

The Display stand is great for posing the figure like he’s in mid-flight.

Just like Starscream, Skywarp has two faces. The “normal” face and his “teeth-gritting” face (Starscream had a smirking face instead) 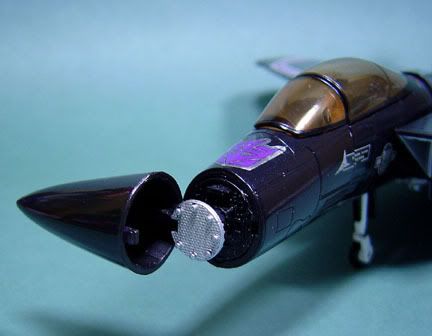 Megatron gun (from Masterpiece Prime 01 and 04) can be mounted underneath the c0ckpit.

To attach the gun to the ring, pull out the gun barrel on Megatron.

I guess Skywarp’s most memorable scene in the series (apart from being the first Transformer to be reactivated on Earth in 4 Million years) was Skywarp holding Megatron in pistol mode when Megatron was loaded with Anti-matter. Skywarp was later defeated by a kid in a wheelchair.

Comparisons with other Masterpieces and Alternators

The Masterpiece toy was re-designed by famed Macross mechanical designer Shoji Kawamori, here’s a comparison with the other Macross mecha from Yamato.

-Pretty much in-scale with Alternators and Binaltechs, but kinda looks puny next to the 12 inch tall Prime and Megatron.

-Skywarp’s diecast parts are pretty limited to the rod in th air-brakes, the internal “spine” of the toy. The rest of the toy is plastic

-The toy is a little top heavy so to make him stand, the legs have to be posed a certain way otherwise it won’t work.

-Definitely a huge improvement over Starscream, a lot of people complained of Starscream breaking apart on the first transformation. With no way to glue to parts back together. No such problems here.