Saw Blade (the saw itself needs to be attached separately) 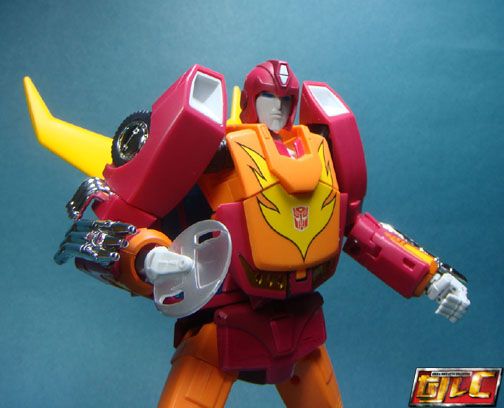 (Note that that’s Optimus’ Matrix, Hot Rod can’t hold his own Matrix due to the size. LOL)

If you’re having trouble transforming Hot Rod’s feet, make sure this section is properly pulled out. Note that there are THREE joints in there that you need to fold out. I was originally having trouble with this because the third, deepest joint wasn’t coming out (took me an hour to figure out what was wrong).

Photon Lasers can be mounted on the engine block, just like in the G1 toy.

Photon Lasers Alpha and Beta combine into the Photon Eliminator for Rodimus Prime. There’s a spring release gimmick too to get them to separate.

Some folding here in the groin joints, doesn’t really add much to the overall height though, maybe only a Centimeter or so difference. 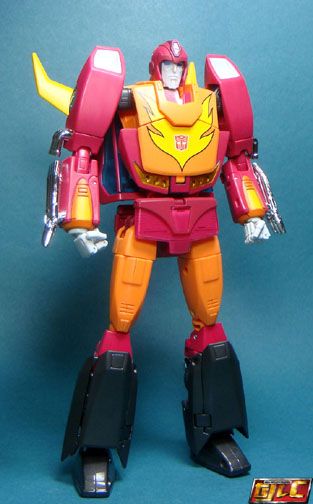 For those curious, no the Igear Faith Leader Prime won’t work either. That one is only 8.5” tall, so Rodimus would be too big for it.

FATAL FLAW ALERT!
For those who are sensitive about the paint scratches on the Hot Rod spoiler, you can use 3M Magic tape to make life less stressful. Like so:

Now if you’ve already gone ahead and gotten scratches on the spoiler (like I did on my first try, D’oh!) you can use a common decent quality rubber eraser (like those used to erase pencil marks) to rub out the paint marks on the toy. The spoiler is yellow plastic so it should come off. Just try to go easy so that it won’t leave heavy scratch marks on the finish.

I felt somewhat cheated when I saw this setup, Rodimus’ vehicle mode is something of a “shell-former”, still I supposed it’s the only way to make it Toon-accurate short of just going for parts-swapping.

Trailer features
All of Hot Rod’s accessories can be stored in the trailer. Including the saw blade and the welding torch.

… or even mounted on the cannon itself.

The Cannons stand roughly close to 11” tall when deployed 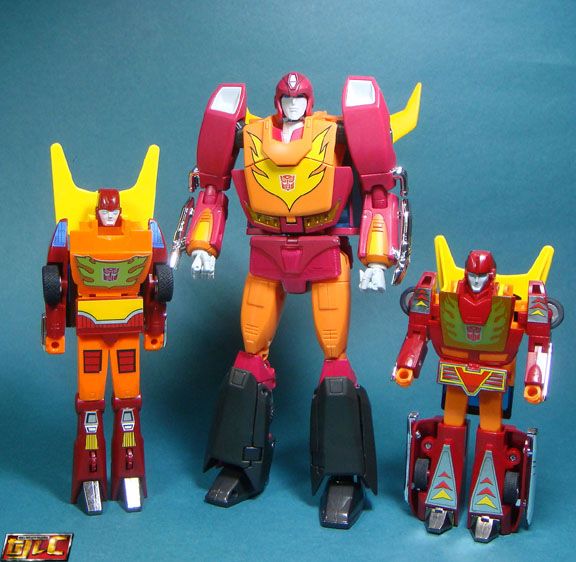 Everything fits into the loot bag, there’s also some extra space in case you want add more goodies in there. 🙂

The display box (comes in a plastic wrap)

There’s a silica gel packet included in there to keep moisture out.

The toy looks great in all 4 modes, there are a few problems I have with it though.
-Diecast only in the feet (sigh). Even the joints are plastic as far as I can tell
-Weighs only 300 Grams, Mp01 weighed more than a Kilo
-Relatively small Rodimus Prime. The height change is really next to non-existent, I wish they added more so it would look better next to the Mp01.
-What is up with the backpack??? I can’t get it to lock in. Strange. Good thing it doesn’t flop out too much.
-Limited shoulder articulation, due to the long shoulders.
-Spoiler gets messed up when you plug Rodimus into the Trailer.
-Getting Hot Rod/Rodimus Prime to hold onto his Guns is a chore! Really. It’s harder than it should be. The Matrix is a bit hard to get into his hands too.
-No electronics? C’mon, Prime, Megatron and Grimlock got some, why not the next Autobot leader? The least they could’ve done was put some lights in the trailer cannons.

I really curious to see if the Hasbro version will have any improvements.