Filed under: TF Power of the Primes
Share This Page 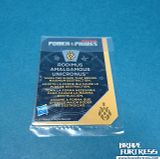 Originally thought to be a “Shattered Glass/”evil universe” take on Rodimus Prime, they decided to go one step further and make this guy a “corrupted” version of Hot Rod/Rodimus Prime.

Bad Side – Good Side

Although being packaged as “Rodimus Unicronus”, the Power of the Primes animated series called him “Rodimus Cron”.

The Matrix of Chaos.

Same as Rodimus Prime, to remove Hot Rod, just pull him free from the torso.

Sadly, Hasbro didn’t include a new head for this guy, in the series, he wore a mask similar to Optimus Prime while he was “corrupted” by the Matrix of Chaos.

It’s funny, but evil Hot Rod actually did more in the show than Rodimus Cron. As evil Hot Rod, he killed Sludge, Computron and Devastator, not to mention beat up Megatron. As Rodimus Cron (which he just “grows” into in the final episode), the just has a shoving match with Optimal Optimus, which he loses. Go figure …..

In the Power of the Primes animated series by Machima, evil Hot Rod transforms his entire forearms into blasters. Sadly, we don’t get that with the toy.

Overall, I like it, better than expected. I’m glad they included this in the story line without going “Shattered Glass” with this guy. It would be cool to imagine what would happen if Rodimus Prime did get corrupted, how would the other Autobots bring him back? I didn’t like the Rodimus Cron resolution in Power of the Primes though, too simple. I would love to see how Ultra Magnus, Kup and the other Season 3 guys handle it.