Filed under: TF Power of the Primes
Share This Page

Looks like the factory in Vietnam is still cranking out Transformers.

I think this is the first time I’ve seen a recycling guide on a packaging.

The back of the poster shows 12 of the 13 Primes and their powers.

In the G1 comics, he and Dinobot Swoop were actually old friends. He didn’t really have that much of a personality in the cartoons and like the rest of the Predacons, was generally a background character.

His tech spec notes that he’s basically a happy camper, taking delight in all the targets that he sees when he’s high above in the air.

Giant cannon can be mounted on his beast mode.

Smug and arrogant, this Predacon does not listen to anyone. In beast mode, his horn can puncture 3-foot steel and can also release corrosive acid.

The cannon clips onto the hard points on his chest.

Rampage is basically the “wild one” of the team, he smashes everything around him in a wild rage.

Cannon can be mounted on beast mode. 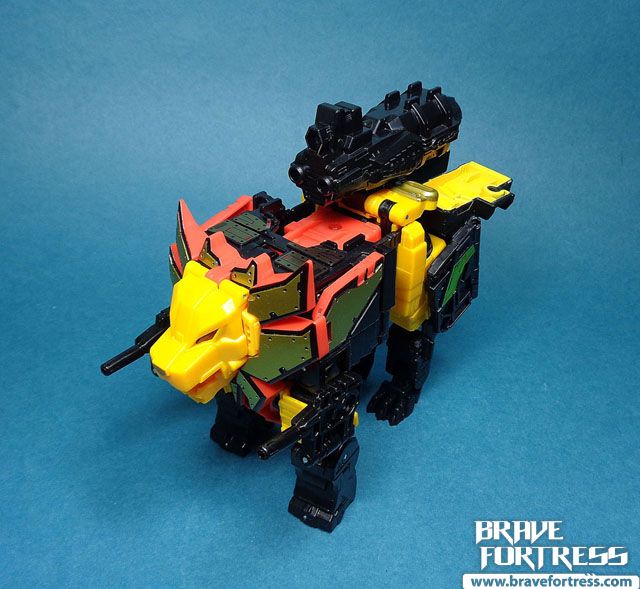 The leader of the Predacon group. Purely focused when given missions by Megatron. Never losing sight of his objectives.

Razorclaw comes with a large cannon as his only weapon.

Giant cannons can be mounted on beast mode.

Lives only for destruction, loves charging head-on into combat. His horns can shoot bolts of 20,000 volt electricity in beast mode.

Same with Headstrong, cannon can be attached to his chest via hardpoint.

The figures are all actually Voyager Classes. Spanning 7 to over 8 inches in height.

The Matrix is hidden underneath Razorclaw’s beast mode head.

Onyx Prime. One of the Original 13 Primes of legend, Onyx Prime was the “Prime Lord of Beasts”. Like other Primes, the ability he grants varies from partner to partner. In the IDW comics, he is later revealed to be a time-displaced Shockwave.

Unlike other Combiners that are usually rendered dumb, or insane, due to the merging of 5 different personalities, Predaking is actually mentally sharp, he also maintains the Predacons’ fast instincts and has impressive raw power. As a warrior, he has no equal. He can generate protective fields, can fire mortars from his feet and wields a powerful X-ray laser cannon. Predaking has no weaknesses.

I’m not really a fan of this design for the waist though. I miss the old stocky, chunky- looking Predaking.

For some reason, they decided to swap the placements for Rampage and Divebomb. Divebomb was on the left in the G1 toy version. 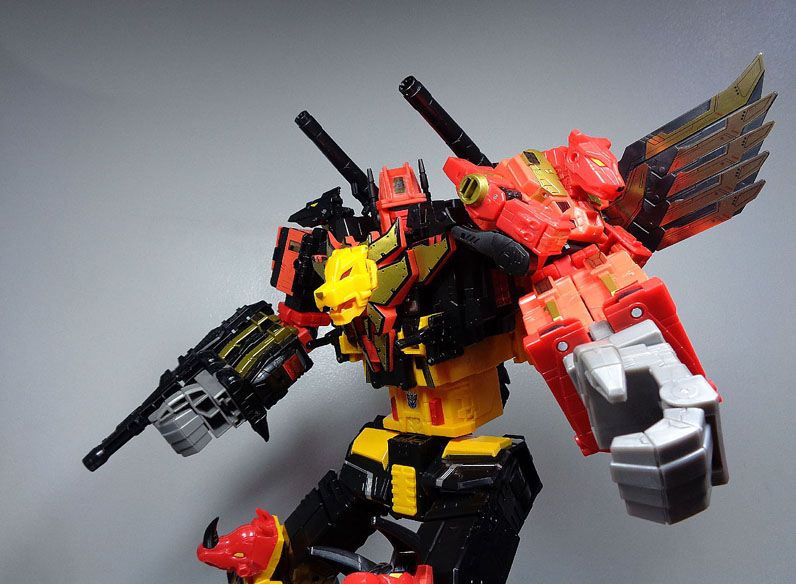 It’s really a shame they didn’t include a sword with this guy, come on, Hasbro…

Overall, it’s not bad, but I wish Predaking had more bulk to it. The small wings and the elongated waist made the combined figure look lanky and unimposing. I also had some issues with the pegs for the weapons. They were too short and they tend to fall off the hands of the Predacons. Sloppy design IMHO.

A cool Easter egg included with the set are the stickers that bear the numbers of the original Takara assigned ID for each Predacon. Nice.