This is the line that got me interested in Transformers toys all over again after G1 ended.

This series gave us a lot of great new things in TF, first is the more complex transformations of the TFs into their car modes, the crack team of Japanese toy engineers behind this evolution would later be the ones who spearhead the designs for BinalTech TF toys. Second, it gave us the first “Evil Prime”/ Black Convoy/ Nemesis Prime character. Third, it gave us an awesome Prime combiner toy, forth, it gave us a “reissue” Fortress Maximus(repainted and renamed as Brave Maximus)

Brave Maximus.. standing at 2 feet tall and weighing almost 3 Kilos, it’s still the BIGGEST and heaviest bot in my collection(well, second only to the Gundam 0083 GP03 Dendrobium..)

After years of searching for these two, I finally found them!! Transformers-R.I.D. (Robots in Disguise, also known as Car Robots in Japan) Skid-Z (Indy Heat) and Towline(Wreckerhook) 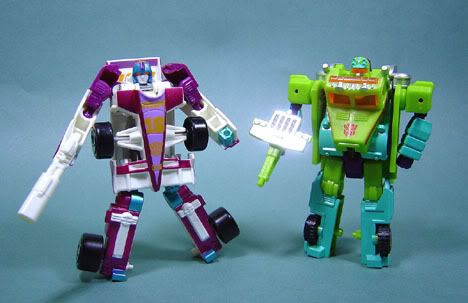 On a side note, these wre reissued in the Robot Masters line, albeit in a different color pattern and character name. 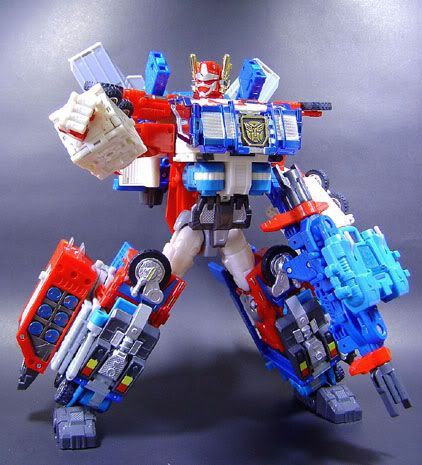 The “Matrix weapon” from the Transformers “Car Robots/Robots in Disguise” Godfire Convoy/Omega Prime. A few pieces have begun popping up over on Ebay. They seem to be custom works but as far as I can tell they’re pretty close to the original.

Foreword: before attempting to attach the handle I recommend using a blow dryer to soften up the clamps first. See the pic of the clamp? It was originally almost shaped like a letter “A” before I spread it open.

Had I forced the clamp as is right out of the box there was definitely no way I could detach the handle from the crest again without something breaking.

The connection goes in a lot smoother now but you’ll still need a screwdriver to pick the clamps off when you disassemble the sword to put it back in the box. 🙂

It comes with an optional handle for Fortress Maximus.

Originally, the only way to get the sword was to buy the Japan TRU exclusive boxset.